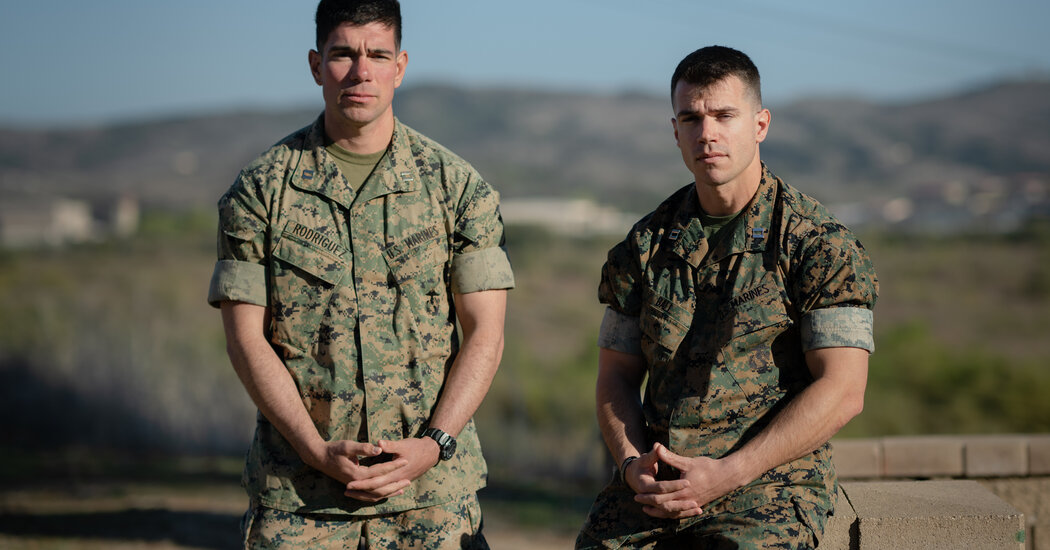 Second-generation Cuban American on his dad’s side and second-generation Mexican American on his mom’s side, Captain Rodriguez followed his father, who had been a Navy reservist, into the military. He got his B.S. in human resources management at California State Polytechnic University, Pomona, and then ended up at Marine Corps basic school in Quantico at the same time as Captain Ball, in 2013. This was his first time in Afghanistan as well. And, like Captain Ball, he had left a pregnant wife at home.

In Kabul, Captain Rodriguez found himself on a mission to rescue 32 Afghan female athletes. Jeff Phaneuf, a former Marine in Princeton, N.J., working with an American organization that was trying to evacuate the athletes, had gotten the captain’s cellphone number.

The athletes were in separate groups en route to the airport or already at Abbey Gate. Captain Rodriguez pushed into the crowd to find them.

It was like a game of telephone with higher stakes. “It was as simple as, ‘What are they wearing?” he recalled of his texts with Mr. Phaneuf. “Then he would relate to me, ‘They’re 200 meters from the canal. They’re wearing this,’ and then, ‘They’re in the canal, they’re wearing that.’ ” And thus, over the course of four hours, Captain Rodriguez found the athletes.

Nearby, other Marines were doing the same thing.

Back in Virginia, Lt. Col. Justin Bellman had been trying to get his former interpreter, Walid, through Abbey Gate for 60 hours. During one melee, Walid’s son had fallen and lost a shoe. Finally, an unfamiliar number showed up on Colonel Bellman’s cellphone while he stood at a bus stop. The caller identified himself as a Marine.

“Did you give a sign with your phone number on it to an Afghan at Abbey Gate?” the voice asked. “Can you vouch for him?”