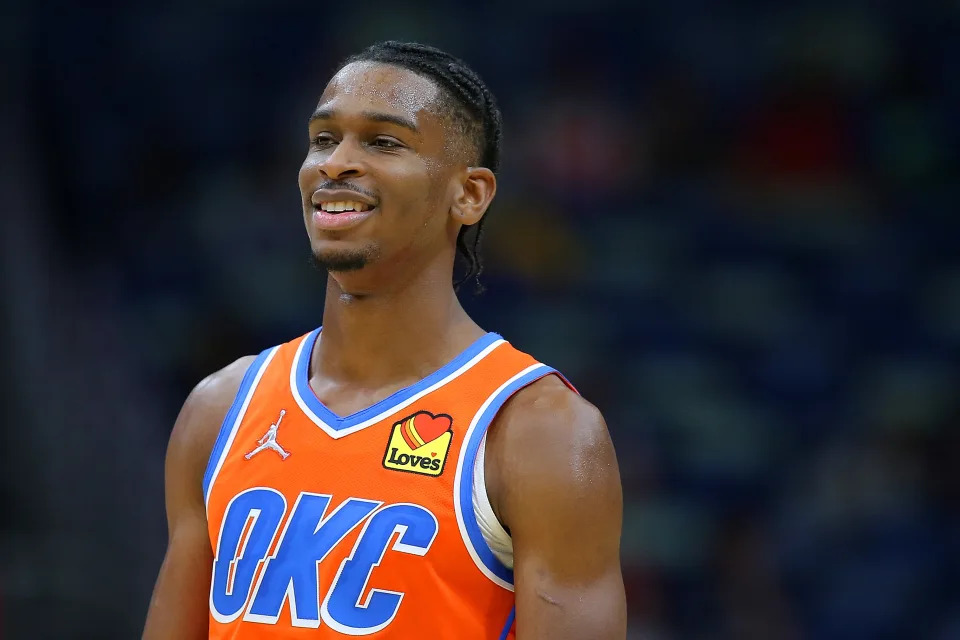 As far as Tuesdays go, we have a busy one with eight games scheduled. COVID-19 continues to sideline players at an alarming rate, making for some ugly depth charts across the league. On the bright side, Adrian Wojnarowski of ESPN reported Monday that players can clear quarantine after six days, instead of the previous 10-day mark. That could lead to significant reinforcements coming for some teams. One who could use the help is the Warriors, who saw Draymond Green join their list of players in the health and safety protocols over the weekend. Let’s dig into the matchups and highlight some players to consider for your Yahoo lineups, as well as a few to possibly avoid.
GUARD

Shai Gilgeous-Alexander, OKC at SAC ($36): COVID-19 has reached the Thunder, who have placed four players in the protocols the last two days. With their outbreak just starting, you’ll want to keep a close eye on their injury report leading to tip off. As long as he remains healthy, this could be a great spot to deploy Gilgeous-Alexander given that the Kings have the fourth-worst defensive rating in the league.

Kemba Walker, NY at MIN ($22): Walker has done nothing but shine since rejoining the Knicks rotation, scoring at least 39.0 Yahoo points in each of the last four games. He logged at least 37 minutes in each of those games, helping the Knicks go 2-2. With Derrick Rose (ankle) out, Walker may have used his second chance to secure a key role with the Knicks.
Guard to Avoid

Kevin Porter Jr., HOU vs. LAL ($25): Porter (thigh) was active Monday against the Hornets, but did not play. It might have just been a situation in which the Rockets didn’t want him to come back from nearly a month on the sidelines to immediately play on consecutive nights. Even if he plays in this matchup, though, he could face a minutes limit.
FORWARD

Yuta Watanabe, TOR vs. PHI ($16): The Raptors could be getting some reinforcements with Pascal Siakam and Gary Trent Jr. possibly coming back from the health and safety protocols. However, they should still have several other absences, which could lead to added playing time for Watanabe. In 37 minutes against the Cavaliers on Sunday, Watanabe scored 26 points to go with 13 rebounds, one steal and one block. If he can play about 30 minutes in this game, he could provide value.

Nemanja Bjelica, GS vs. DEN ($10): Andrew Wiggins is expected to return for this game, which would provide a significant boost for the Warriors. They had to place Green in the protocols Sunday, leaving a massive hole in their frontcourt. His absence could lead to added minutes for Bjelica, who has averaged 11.3 points, 6.7 rebounds and 2.8 assists in six games in which he has logged at least 20 minutes.
Forward to Avoid

Harrison Barnes, SAC vs. OKC ($22): Barnes hasn’t been the same player since missing a five-game stretch with a foot injury. Across the last 10 games, he has shot just 39.3 percent from the field. The odd part is, he’s shot 40.0 percent from behind the arc during that stretch. On a busy night like this with so many viable options, it might be best to avoid Barnes until he shows signs of turning things around.
CENTER

Joel Embiid, PHI at TOR ($50): With all of their COVID issues, the Raptors are lacking size for this battle with Embiid. He comes into this game on a hot streak, averaging 33.0 points, 10.5 rebounds, 3.5 assists and 2.0 blocks in the last four games. There is some blowout risk that could leave Embiid with added time on the bench in the fourth quarter, but even if that scenario unfolds, he could do plenty of damage along the way.

Omer Yurtseven, MIA vs. WAS ($12): The Heat are running out of viable center options with Bam Adebayo (thumb) and Dewayne Dedmon (knee) out. Yurtseven stepped into the starting five with Dedmon out Sunday, posting 16 points and 15 rebounds against the Magic. The last five games, he’s averaged 8.6 points and 12.8 rebounds. At near the minimum salary, he’s a prime option if you want to fade Embiid in tournament play.
Center to Avoid

Daniel Gafford, WAS at MIA ($16): The Wizards have a deep frontcourt, which has limited Gafford to an average of only 22 minutes per game. That has contributed to him scoring 25.7 Yahoo points or fewer in six of the last seven games. Yurtseven has arguably a higher upside to go with a cheaper salary, making it difficult to justify taking a chance on Gafford.