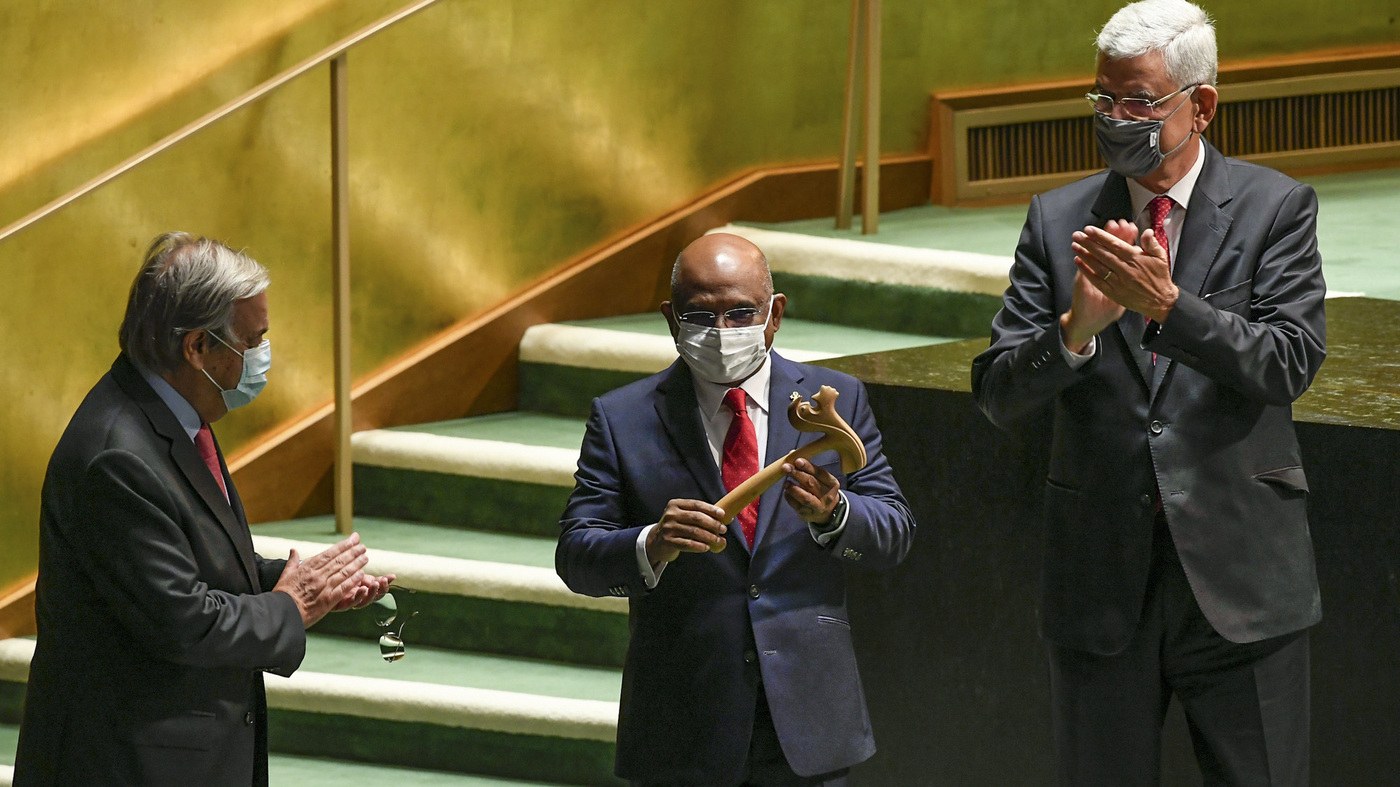 World Leaders May Have To Be Vaccinated To Speak At the U.N. Next Week : NPR

UNITED NATIONS — World leaders will have to be vaccinated against the coronavirus to speak at the U.N. General Assembly’s big meeting next week, the assembly leader and New York City officials have said, prompting swift objections from at least one nation.

With the diplomatic world’s premier event being held in person for the first time during the pandemic, city International Affairs commissioner Penny Abeywardena told the assembly in a letter last week that officials consider the hall a “convention center” and therefore subject to the city’s vaccination requirement.

“We are proud to join in the ongoing efforts to keep all U.N.G.A. attendees and our fellow New Yorkers safe during the pandemic,” she and Mayor Bill de Blasio said in a statement Wednesday, adding that the city would offer free, walk-in vaccinations — Johnson & Johnson’s single shot — and testing outside the U.N. during the meeting.

G.A. President Abdulla Shahid embraced the vaccination requirement in a letter Tuesday, calling it “an important step in our return to a fully-functional General Assembly.”

But Russian Ambassador Vassily Nebenzia blasted the vaccine demand as a “clearly discriminatory” infringement on nations’ rights at the U.N.

“We believe that no measures beyond reasonable precautions should be introduced that de-facto prevent member states to participate in a meeting in GA Hall,” he wrote to Shahid in a Wednesday letter seen by The Associated Press.

Requesting an urgent Assembly meeting Thursday to discuss the matter, Nebenzia said the group needed to think about people who can’t be vaccinated for medical reasons and those who have developed antibodies from very recent cases of COVID-19. He also pointed to people who have gotten vaccines that don’t have World Health Organization approval — the city’s criterion for an acceptable inoculation, according to de Blasio spokesperson Mitch Schwartz.

The WHO is reviewing Russia’s Sputnik V vaccine but hasn’t yet approved it.

The city’s letter represented a rare effort to broach conditions for goings-on at the U.N. headquarters, which is international territory. Under a 1947 agreement between the U.N. and the United States, the world body has considerable autonomy — police and American officials need permission to come in, and no federal, state or local law applies if it conflicts with U.N. rules.

It’s not immediately clear how the vaccination requirement will be enforced. Schwartz said it would be up to the U.N. An inquiry was sent to the Assembly.

Stephane Dujarric, a spokesperson for U.N. Secretary-General Antonio Guterres, noted the Assembly’s authority to make decisions affecting delegates but said the organization would work to help implement them.

Nor is it clear how many of the dignitaries converging on the U.N. next week are vaccinated — or whether their aides had access to the vaccine.

Some 104 heads of state and government and 23 cabinet ministers plan to deliver their countries’ signature speeches in person from the Assembly hall’s marble rostrum. Other nations’ leaders are speaking by video — the only option any country had last year, when the virus crisis prompted an extraordinary decision to hold the world’s premier diplomatic gathering virtually.

This time, each leader who shows up in person can bring along only six people to the U.N. headquarters, and only four into the Assembly hall. Meanwhile, the world body is requiring all its own staffers in the building during the week to be vaccinated.