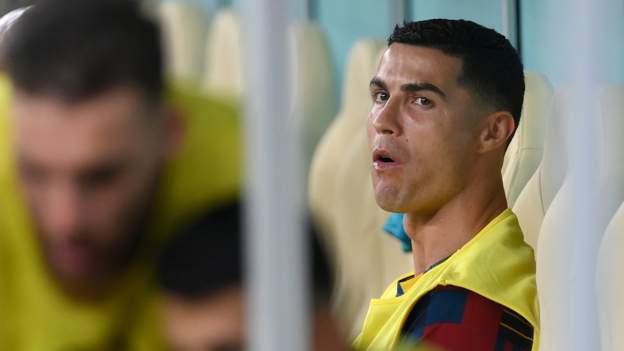 Cristiano Ronaldo was reduced to the role of the superstar nobody wants after Portugal followed Manchester United’s lead in deciding they might just be better off without him.

And better off without him they certainly were as Portugal rewarded coach Fernando Santos’s courage in dropping his country’s sporting icon with the complete attacking performance and a 6-1 win over Switzerland that sets up a World Cup quarter-final against Morocco.

Santos was not only vindicated for his decision to axe Ronaldo after publicly criticising his gestures when he was substituted in the last group game against South Korea, he hit the jackpot as his young replacement Goncalo Ramos looked the real deal in hitting a superb hat-trick.

It has been a bruising time for 37-year-old Ronaldo’s considerable pride and ego as first his Manchester United career ended in acrimony following public criticism of the club and now Portugal did what was previously unthinkable – at least going as far back as 31 games and before Euro 2008 – and ditched him from their starting line-up at a major tournament.

This was certainly the bravest selectorial call of this World Cup and the biggest of Santos’ eight-year time in charge of Portugal.

Santos, despite having a Euro 2016 win on his CV, will have known what was at stake by making this seismic change. If Portugal had lost, he would have known who would carry the can for their World Cup exit and it would not have been Cristiano Ronaldo.

Instead, Santos watched with his usual stern expression as Portugal looked a more vibrant, fluid and threatening side without all their focus trained on the often overpowering presence of Ronaldo.

Portugal moved smoothly through midfield with Bernardo Silva and Bruno Fernandes at the controls, and up front Benfica’s 21-year-old striker Ramos, previously unknown on this sort of goal-scoring stage, carried any burden he may have been feeling as Ronaldo’s replacement lightly.

The previously subdued but richly talented Joao Felix looked liberated, rather like the rest of the Portugal team.

Ramos’s hat-trick came in various very well-taken shapes via a near-post finish thrashed high past Switzerland keeper Jan Sommer, then a poacher’s near-post strike from a cross, before a clever dink for his hat-trick. Some first full Portugal start.

Ronaldo, before this game, had played 514 minutes of World Cup knockout football without a goal. Ramos had three in 67 minutes.

Pepe, the 39-year-old defensive warhorse, showed age was not a factor in Santos’s thoughts as he headed the second while Ramos showed he could make them as well as score them when he set up Raphael Guerriero to make it 4-0.

And through it all sat Ronaldo, cameras trained on every facial expression as the Portuguese national hero saw the first signs of his international career following his Manchester United career into the past.

He was swarmed by hundreds of cameramen once the national anthems had finished playing and there was an almost testimonial feel to what happened once Portugal proved they were superior for his absence by routing a bitterly disappointing Switzerland.

Ramos had made it 5-1, Portugal were cruising, when a huge roar of “Ronaldo” started to sweep around the vast Lusail Stadium, followed by chants of his celebratory trademark “Siu”.

It appeared to be a large number of locals who had paid their money to see Ronaldo in the flesh who were leading the demands. It may even have been the suffering Switzerland fans hoping Santos would remove their tormentor Ramos.

Santos relented with 16 minutes left, sending Ronaldo on for Joao Felix to a pop star’s reception.

It was all vaguely awkward – even a touch embarrassing – as the fading talisman trotted on to make what felt like a personal appearance rather than a meaningful contribution in a World Cup knockout game.

There was an air of anticipation every time Ronaldo received the ball, those inside the arena desperate to see some of the old magic. They almost saw it when he rammed in a shot but the boos rang out as the offside flag went up.

Even Ronaldo’s brief spell in the limelight was stolen away from him when another bright young Portugal striker, Rafael Leao, came on and rounded off this thumping win with the sort of finish, curled into the top corner, that already has the 23-year-old marked down as a future star at AC Milan.

At the final whistle, Ronaldo applauded the crowd then was first down the tunnel, leaving the real celebrations to those who deserved it, namely his Portugal team-mates who had delivered their finest performance of this World Cup and who will threaten anyone performing like this.

Ronaldo may yet make a decisive contribution at this tournament – he is trying to attract a new club after all – but it is hard to see him making it as a starter against Morocco.

After being shown the door at Manchester United for his petulance and outspoken views on the club’s hierarchy, he now finds himself marginalised on territory where he must have thought he was even more untouchable with Portugal.

As the old saying goes, Ronaldo was the future once. He increasingly looks like the past and the future belongs to emerging stars such as Ramos and Leao.

So what now for the fallen idol of club and country? Surely the bench at best against Morocco.