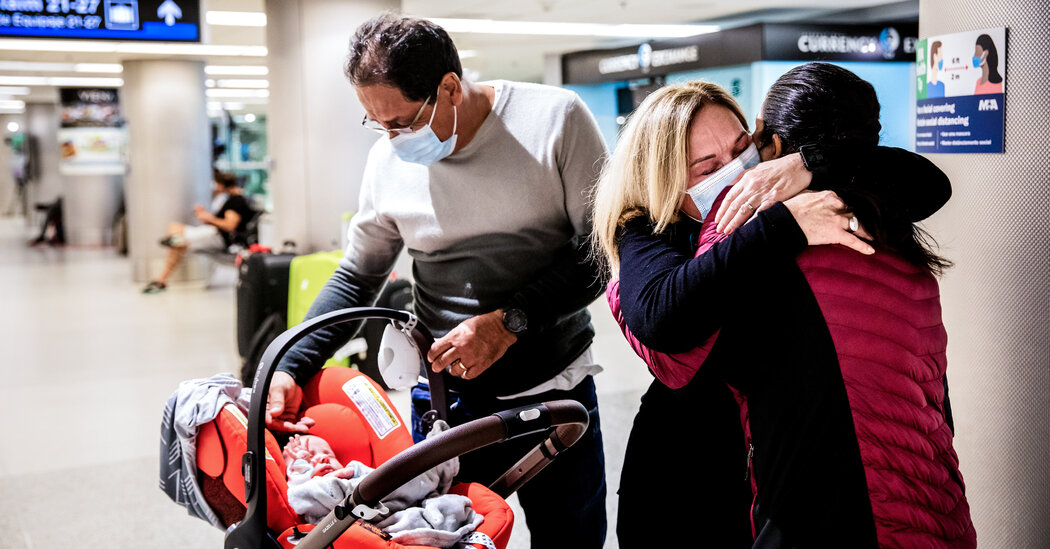 “There are so many things to remember and organize,” she said as she sat on a bench in the departure terminal, refreshing her email feed every few minutes as she waited for her negative coronavirus test result. “It’s very stressful, but I know it’s going to be worth it when I see my children and meet my grandchildren,” she said, her eyes welling up with tears.

Reyna Martinez, from Ensenada, in Mexico, crossed the border from Tijuana into California with her daughter for the first time in two years. She said she used to cross at least four times a year to see friends or go shopping. On Monday she was on her way to Long Beach, Calif., to visit a friend. “Who knows if they might close it again,” she said, speaking in Spanish. “I was worried if I didn’t go now, I might miss out. So here we are.

In Canada, Judy and Wayne Peters were packing up their cobalt gray BMW for their 1,520-mile journey south from Kelowna, British Columbia. They own a manufactured home in an upscale R.V. park in Yuma, a city halfway between Phoenix and San Diego.

Hundreds of thousands of Canadian “snowbirds,” typically retirees, flock to the United States each year to spend the winter.

Now that pandemic travel restrictions have been lifted, thousands are already on their way to Florida, Arizona and California, among other warm destinations, with campers and boats in tow.

“It was a mild winter here, so that worked out in our favor,” said Mr. Peters, 69. “But we are looking forward to being in a nice warm environment again, with our American friends.”

2022-11-26
Previous Post: Nicaraguan exiles blame Ortega’s regime for attacks and threats, as he secures fifth term in office
Next Post: More Than 40 Nations Pledge to Cut Emissions From Their Health Industries