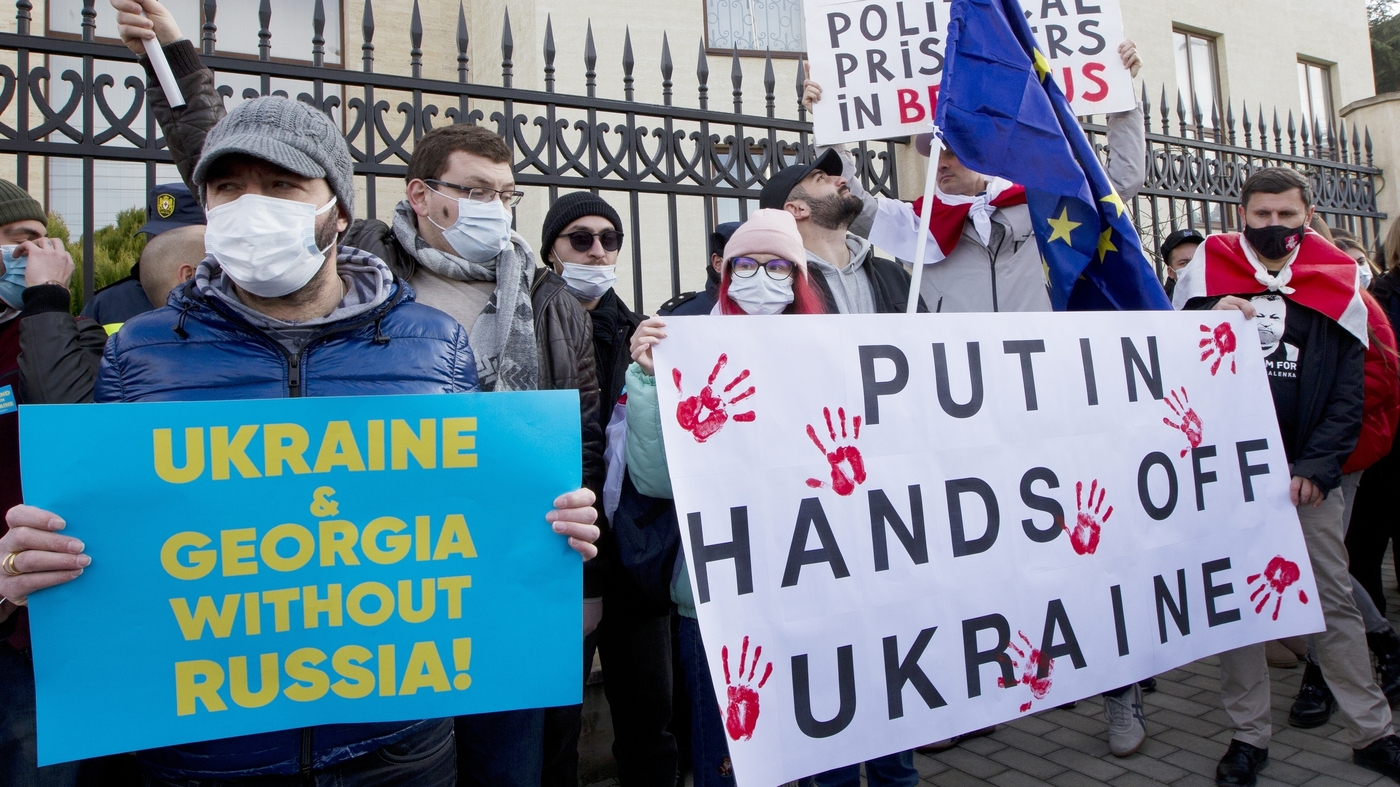 Who is Yevheniy Murayev, the politician the U.K. says Russia wants in Ukraine : NPR

Georgian activists hold posters as they gather in support of Ukraine in front of the Ukrainian Embassy in Tbilisi, Georgia on Sunday, Jan. 23. The British government on Saturday accused Russia of seeking to replace Ukraine’s government with a pro-Moscow administration.

Georgian activists hold posters as they gather in support of Ukraine in front of the Ukrainian Embassy in Tbilisi, Georgia on Sunday, Jan. 23. The British government on Saturday accused Russia of seeking to replace Ukraine’s government with a pro-Moscow administration.

The Russian government is rejecting a British report alleging that it has a leader in mind for installation after a potential invasion of Ukraine.

In a highly unusual public statement posted Saturday titled “Kremlin plan to install pro-Russian leadership in Ukraine exposed,” the U.K.’s Foreign Secretary said her office has information indicating the Russian government was looking to install a pro-Russian leader in Kyiv. The statement named Yevheniy Murayev as the top contender.

“The information being released today shines a light on the extent of Russian activity designed to subvert Ukraine, and is an insight into Kremlin thinking,” Foreign Secretary Liz Truss said.

Murayev has been friendly to Russian causes throughout his career

The 45-year-old Murayev has long established himself as a Ukrainian politician friendly to Russian causes. He spouts views generally in line with Russian positions, and was critical of the 2014 Maidan revolution in Ukraine that led to the election of pro-Western leadership. When he speaks publicly, he generally speaks in Russian, as opposed to Ukrainian.

Running with the Opposition Block faction, a pro-Russian party, Murayev won a seat in the Ukrainian Parliament in 2014. He later formed the political party Nashi, one of several opposition parties that oppose Ukraine’s pro-Western parties. Murayev continued serving in parliament until 2019, when the Nashi party failed to meet the 5% threshold for continued representation.

Murayev has been critical of Ukrainian President Volodymyr Zelenskiy. He has accused Zelenskiy of being controlled by the West, according to Reuters, and has parroted the Russian line that Ukraine might try to regain Russian-controlled territory by force.

“Zelenskiy is a hostage and he is being blackmailed by MI6, the CIA, anyone. Tomorrow they can force him to launch an offensive against the Donbass, which will lead to a full-scale war,” he said, referencing the region in eastern Ukraine where pro-Russian separatists have been battling the government since 2014.

He has dismissed the U.K.’s claims

Murayev dismissed claims that the Kremlin was interested in having him as a candidate. “The British Foreign Office seems confused,” Murayev told the Observer. “It isn’t very logical. I’m banned from Russia. Not only that but money from my father’s firm there has been confiscated.”

In a statement Sunday, the Russian Embassy to the U.K. said the claim demonstrated “an obvious deterioration of British expertise on Russia and Ukraine.” The embassy said Murayev “happens to be under Russian sanctions for being a threat to national security.” Murayev has been on Russia’s sanctions list since 2018.

London should “stop the stupid rhetorical provocations, quite dangerous in the current heated situation,” the embassy said.

On Saturday, Murayev posted a mocked up photo of himself as James Bond, promising more details would come shortly. A few hours later, he posted what seemed like a candidate statement, which sought to downplay the perception of Russian support.

“Ukraine needs new politicians whose policy will be based solely on the principles of national interests of Ukraine and the the Ukrainian people,” he wrote, according to a translation. “I appeal to everyone who is not indifferent to the fate of Ukraine — stop dividing us into varieties, pro-Russian and pro-Western ones.” He called Ukraine an “independent state” that “can and must decide our own fate.”

“Some of these have contact with Russian intelligence officers currently involved in the planning for an attack on Ukraine,” the foreign secretary said.