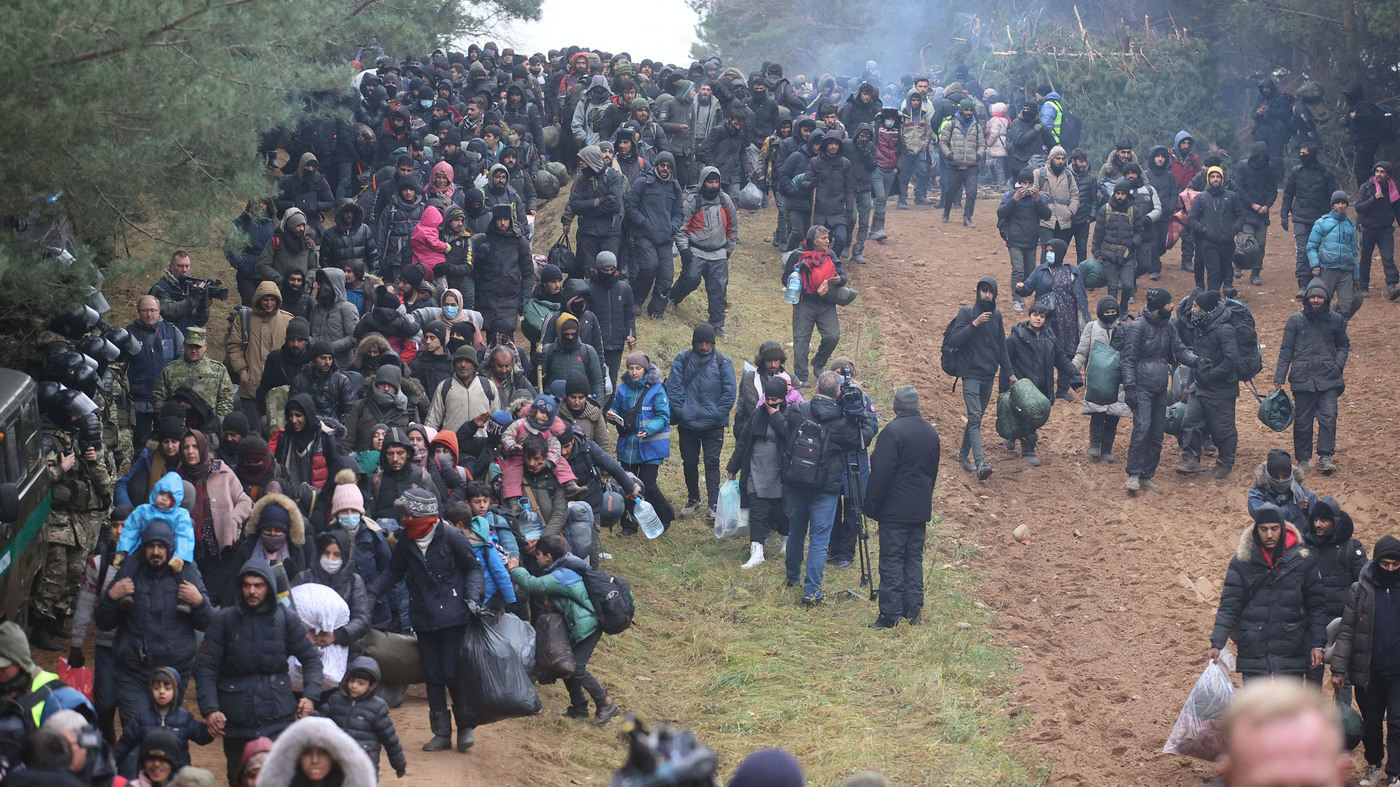 White House warns of increasing use of migrants as weapons : NPR

Migrants head toward a border checkpoint on the Belarusian-Polish border on Nov. 15, 2021.

Migrants head toward a border checkpoint on the Belarusian-Polish border on Nov. 15, 2021.

The White House has become increasingly concerned of migration being used as a weapon.

U.S. officials have accused Belarusian leader Alexander Lukashenko of being the latest to take advantage of desperate migrants. They say he helped bring migrants from war-torn nations to the Belarus border in order to create a humanitarian crisis and put political pressure on his European neighbors.

It takes a particularly evil mindset to see that people and their vulnerability and humanity can actually be used as a means to achieve political ends.

It’s the kind of geopolitical tool that the White House is concerned could be used even more as increased instability and climate change drive more people from their homes.

The world was shocked last month by images of desperate people from Africa, the Middle East and as far away as Cuba trapped — and dying — in the cold forest trying to cross the border into Poland.

The president of the European Commission, Ursula von der Leyen, traveled to Washington late last month to discuss the crisis with President Biden. She called it a “hybrid attack.”

“This is not a migration crisis,” she told reporters at the White House. “This is an attempt by an authoritarian regime to try to destabilize its democratic neighbors. This will not succeed.”

The U.S. later joined the European Union, United Kingdom and Canada imposing new sanctions on Belarus officials and organizations accused of facilitating the transportation of migrants to the border.

They were just the latest in series of sanctions allies have slapped on Belarus over political repression and corruption since Lukashenko’s controversial 2020 election, which the United States and European Union say was fraudulent.

But Karolina Łukasiewicz, a fellow at the Centre of Migration Research at the University of Warsaw, said Lukashenko succeeded in getting some recognition from the European and the international community.

“Until very recently, European leaders has not been speaking to Lukashenko,” she said. “He was not recognized as a legal president.”

She says world leaders are talking to him now, noting his call with German Chancellor Angela Merkel, before she left office.

“So you can say it’s already working,” Łukasiewicz said.

Belarusian leader Alexander Lukashenko speaks during a meeting with Commonwealth of Independent States officials in Minsk on May 28, 2021.

Belarusian leader Alexander Lukashenko speaks during a meeting with Commonwealth of Independent States officials in Minsk on May 28, 2021.

She also accused the Polish government of taking advantage of the crisis to build support among anti-migrant groups in Poland and distract from criticism over its response to the COVID-19 pandemic.

The practice is part of an increasing trend

Lukashenko is not the first leader to see opportunity in a migration crisis.

Daalder says the practice is part of an increasing trend of using migrants in asymmetric warfare.

“What we’re seeing is certain leaders being willing to find another tool to gain leverage over a stronger adversary and to do so in ways that might not have been conceivable,” he said.

The White House has taken notice.

It put out a report this fall warning that increasing climate-related migration could be used by malign actors to “induce political instability in several ways.”

“Large migration flows are frequently framed as a threat to both domestic and international stability and social cohesion,” the authors write.

The United Nations reports that an average of 21.5 million people were displaced a year since 2010 by floods, storms, wildfires and extreme temperatures. The White House estimates that tens of millions more will likely be displaced over the next two to three decades because of climate change.

One big concern is that adversaries like Russia and China could try to take advantage of migration, particularly migration caused by climate change.

The White House says Russia is already trying to benefit from anti-migrant sentiment in Europe. And China is looking to curry favor by providing support for countries “grappling with political unrest related to migration.”

Sherri Goodman, a senior fellow at the Woodrow Wilson Center, said China is using all its “instruments of political influence.”

Goodman, who was one of the first to make the case that migration caused by climate change is a threat to national security, says China is actively building up its soft power with small nations in the South Pacific threatened by climate change.

“If it comes in as the rescuer — ‘I’m going to improve your infrastructure or I’m going to provide you fresh water where you’re running out’ — that is compelling to countries that are increasingly at risk,” Goodman said.

The White House emphasizes it’s not just a problem overseas.

Migration from Central America is a huge political challenge in the U-S — and could be exploited by adversaries.

And that’s more reason the White House argues the U.S. should model good, humane practices for the rest of the world.

“Policy responses in the developed world will have a direct impact on political stability elsewhere,” the White House report states.

2021-12-13
Previous Post: The Supply Chain is the Perfect Asymmetric Target
Next Post: ‘Our Boat Was Surrounded by Dead Bodies’: Witnessing a Migrant Tragedy