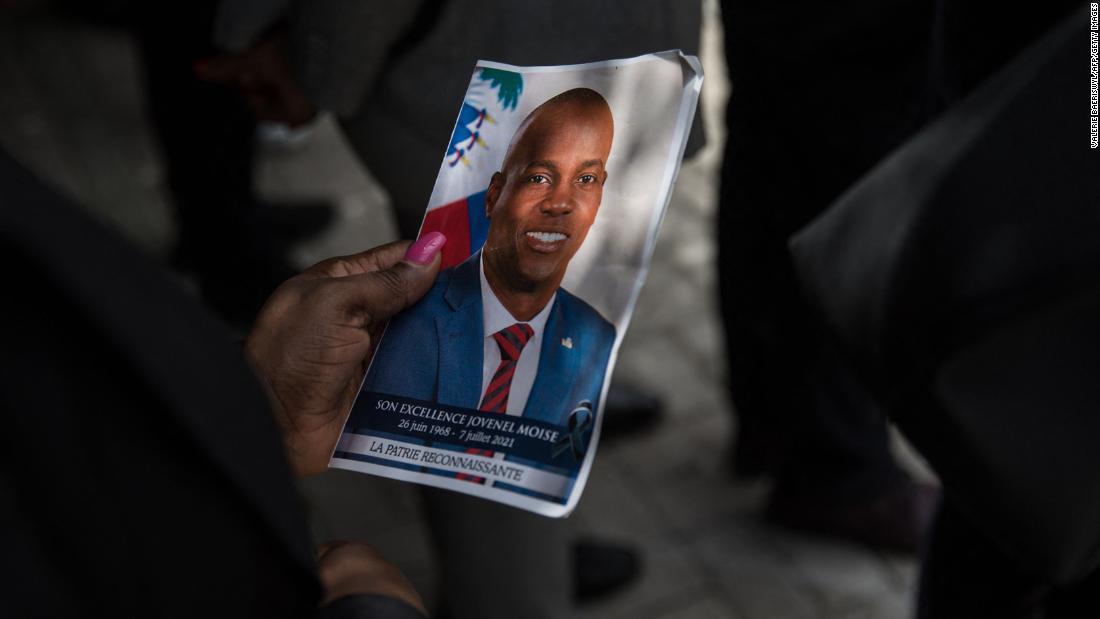 US charges Colombian man with conspiracy to kill Haiti’s president

Mario Palacios was extradited to the US from Panama on Tuesday, Colombian National Place said in a statement.

Palacios was one of the few suspects that managed to flee the country after Moise’s assassination. He eventually ended up in Jamaica, where he was captured by authorities for entering the country illegally. How Palacios escaped Haiti remains unknown.

On Tuesday, Palacios was being deported from Jamaica to his home country when he was intercepted during a layover in Panama, according to a US Department of Justice (DOJ) statement. He was subsequently extradited from Panama to Miami, it said.

“The three countries (Panama, Colombia, and United States) were in constant contact coordinating this deportation and the last extradition to the United States yesterday,” said the director general of the National Police of Colombia, Gen. Jorge Luis Vargas Valencia.

Palacios appeared for an initial court appearance on Tuesday in the Southern District of Florida, which is where the criminal complaint against him was filed, according to the DOJ statement.

Palacios’s attorney Alfredo Izaguirre told CNN on Tuesday that his client is “probably going to plead not guilty” at a pretrial hearing later this month, “but I can’t confirm that yet.”

Palacios is alleged to have been part of the group of attackers who stormed Moise’s private residence in an affluent neighborhood in Port-au-Prince in the early hours of July 7, killing the President and injuring his wife, Martine.

Authorities have said that dozens of people were involved in Moise’s death, including 26 Colombians and two Haitian-Americans.

Exactly what happened inside the President’s home and who masterminded the attack remain at the heart of multiple investigations involving senior agents from the United States and Colombia, in addition to local authorities.

Top foreign officials, including members of the US National Security Council and Colombia’s chief of national intelligence, have visited Haiti in the wake of Moise’s death.

Colombian National Police say that initial information suggests that Palacios will cooperate with US authorities in their investigation.

Palacios previously placed himself in the President’s bedroom on the morning of his death, telling Colombian weekly Semana last August: “I don’t know who killed him (Moise) because when I arrived, commanders Yepes and Romero were already there.”

Palacios told Semana that the President was already dead when he arrived at the scene.

“I don’t know who killed him. I’m telling you from the bottom of my heart, on my family and on my kids,” he said.

Palacios faces a maximum sentence of life imprisonment if convicted of the charges, according to the DOJ.

Martine Moise told CNN in August that at the time of the assault, she and her husband sought refuge in their bedroom, only for the door to burst open minutes later with gunfire ripping through the air and striking her.

“It was around 1 a.m. when the shooting started… It wasn’t something small, it was the sound of automatic weapons,” she said.

Face down and bleeding, Martine recalled estimating around a dozen men ransacking the room in search of something.

She said an assailant then approached her husband — unhurt at that point — and made a phone call, describing him down the line before shooting him dead.

Despite several arrests in Haiti, Palacios is the first suspect charged in relation to Moise’s assassination.

CNN spoke exclusively in December with five of the suspects who are being held in Haiti’s National Penitentiary in Port-au-Prince.

They insist they were not responsible for the President’s death but declined to answer further questions due to a lack of legal representation and because they fear for their lives.

“We were useful idiots for someone else,” one of the men said. “But we did not commit this crime.”