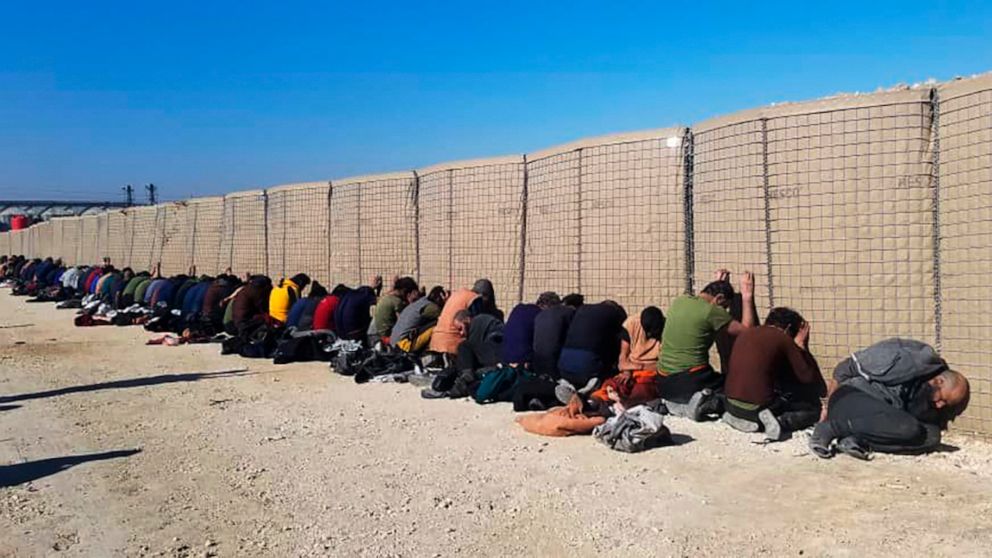 US-backed fighters chase IS gunmen near prison in Syria

Fighting broke out Thursday night when IS unleashed its biggest attack in Syria since the fall of its “caliphate” three years ago. More than 100 militants assaulted the main prison holding suspected extremists in the northeastern city of Hassakeh, sparking a battle with U.S.-backed Kurdish fighters that has so far left dozens dead.

Despite their defeat in Syria nearly three years ago, IS sleeper cells have carried out deadly attacks against U.S.-backed fighters of the Kurdish-led Syrian Democratic Forces as well as government forces on the west bank of the Tigris River in eastern Syria.

The group’s territorial control in Syria and Iraq, where they once declared their “caliphate” was crushed by a years-long U.S.-backed campaign. But its fighters continued with sleeper cells that have increasingly killed scores of Iraqis and Syrians in past months.

The U.S.-backed Kurdish-led Syrian Democratic Forces brought more reinforcements into Hassakeh in an attempt to regain control of areas taken by IS, residents said. More civilians fled the areas of fighting as sounds of explosions echoed in the city and black smoke billowed from the Gweiran Prison area on the southern edge of Hassakeh.

Hassakeh Gov. Ghassan Khalil told Syrian state media that some 4,000 civilians have fled to areas controlled by Syrian government forces in the city and its suburbs. He told state TV that authorities set up three shelters for the displaced and mosques were also asked to open their doors for those who were forced to leave their homes.

Hassakeh-based journalist Adnan Hassan said in the early afternoon, a large SDF force consisting of scores of fighters, Humvees and vehicles carrying heavy machineguns arrived in the areas to boost the anti-IS operations.

SDF fighters “succeeded in thwarting the attempt to free the prisoners but it is not clear when they will have the situation under full control,” Hassan said.

Gweiran Prison is the largest of around a dozen facilities run by U.S.-backed Syrian Kurdish forces holding suspected IS fighters. Gweiran holds more than 3,000 inmates, including IS commanders and figures considered among the most dangerous.

“The battles are taking place on the edge of the prison,” SDF spokesman Siamand Ali told The Associated Press, adding that most of the prison is under their control apart from a small part that is held by rioting prisoners. He added that fighting is also ongoing in the nearby Zuhour neighborhood, where IS fighters were holed up.

Ali said SDF fighters and U.S.-led coalition aircraft targeted a technical academy building where dozens of “Daesh terrorists took positions.” Ali, who used an Arabic acronym to refer to IS, said SDF fighters are advancing slowly in order to protect the lives of civilians as IS gunmen are holed up in alleys and in residential homes.

He said the SDF’s elite anti-terrorism unit and commandos are leading the operations that intensified Saturday night in neighborhoods east of the prison, where scores of IS fighters are holed up. He said SDF officials are at the same time trying to convince rioting detainees to surrender, because a confrontation inside the prison “could have grave consequences” due to the large numbers of detainees.

Ali said some 45 IS gunmen were killed in the fighting, adding that a statement will be issued later about the casualties among SDF fighters.

The Britain-based Syrian Observatory for Human Rights, an opposition war monitor, said that since Thursday night, 89 people have been killed, including 56 IS gunmen, 28 Kurdish fighters and five civilians. The Observatory added that SDF fighters were using loud speakers to call on IS fighters to surrender but the extremists refused.

On Friday, the SDF’s top military commander, Mazloum Abadi, said IS mobilized “most of its sleeper cells” to organize the prison break.

The militants, armed with heavy machine guns and vehicles rigged with explosives, attacked Thursday evening, aiming to free their comrades.

On Friday an SDF spokesman said they recaptured 104 militants who escaped from the prison. But he said the total number who had broken out was not determined.

The Islamic State group claimed responsibility for the prison break on its Aamaq news service Friday, describing it as ongoing. Freeing convicts and imprisoned comrades has been a main tactic of the group. During their 2014 surge that overwhelmed territory in Iraq and Syria, IS carried out multiple prison breaks.

At its height, the Islamic State group’s self-styled caliphate covered a third of both of Iraq and Syria. The ensuing war against them lasted several years, killed thousands, and left large parts of the two neighboring countries in ruins. It also left U.S.-allied Kurdish authorities in control of eastern and northeastern Syria, with a small presence of several hundred American forces still deployed.