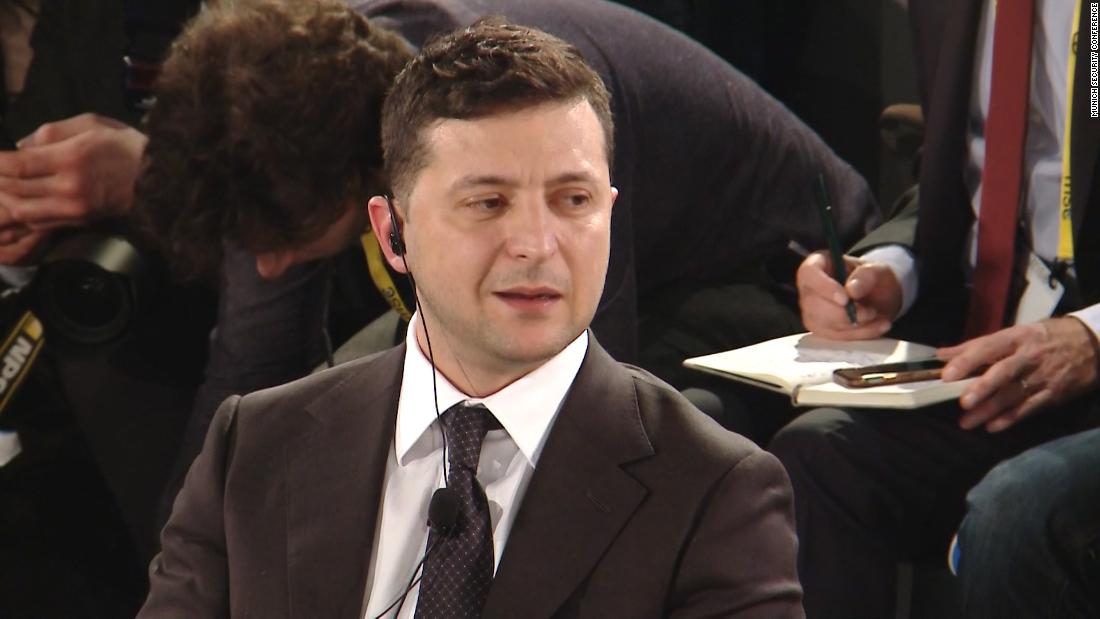 Ukrainian President Volodymyr Zelensky pushes back on Biden: ‘There are no minor incursions’

“We want to remind the great powers that there are no minor incursions and small nations,” Zelensky wrote on Twitter in an apparent response Biden’s remarks on Wednesday. “Just as there are no minor casualties and little grief from the loss of loved ones.”
Biden’s comments at a news conference Wednesday about the prospect of Russian military action alarmed Ukrainian officials as Russia has amassed tens of thousands of troops along the border. While US officials have engaged in multiple rounds of diplomatic talks with Russia in recent days — and Secretary of State Antony Blinken is meeting with his Russian counterpart on Friday — US officials have warned an attack could be imminent.

In his comments Wednesday, Biden suggested that a “minor incursion” could prompt a disagreement among NATO countries about how strongly to respond to Moscow.

“It’s one thing if it’s a minor incursion and we end up having to fight about what to do and not do, et cetera,” Biden said.

“If there is something that is where there’s Russian forces crossing the border, killing Ukrainian fighters, et cetera, I think that changes everything,” the President later said. “But it depends on what he does, to what extent we’ll get total unity on the NATO front.”

On Thursday, Biden sought to clarify his earlier remarks, telling reporters at the White House, “I’ve been absolutely clear with President Putin. He has no misunderstanding. If any — any — assembled Russian units move across Ukrainian border, that is an invasion,” Biden said. “But it will be met with severe and coordinated economic response that I’ve discussed in detail with our allies, as well as laid out very clearly for President Putin.”

As he sought to clean up his previous remarks, Biden noted that Russia has a “long history” of using measures other than overt military action to carry out aggression, from paramilitary tactics to cyberattacks.

“We have to be ready to respond to these as well and decisively,” Biden said.

On Wednesday, Biden also suggested that he believed Putin would launch an attack, though he said he didn’t believe the Russian President had made up his mind. “I’m not so sure he is certain what he is going to do. My guess is he will move in. He has to do something,” he said.

Officials in Kyiv were “stunned” in the immediate aftermath of Biden’s comments, CNN reported Wednesday.

On Thursday, Ukraine’s foreign minister, Dmytro Kuleba, told the Wall Street Journal that Biden’s comments could serve as an invitation to attack by Moscow.

“Speaking of minor and full incursions or full invasion, you cannot be half-aggressive. You’re either aggressive or you’re not aggressive,” Kuleba said. “We should not give Putin the slightest chance to play with quasi-aggression or small incursion operations. This aggression was there since 2014. This is the fact.”

Biden and American officials have repeatedly sought to emphasize that Moscow would pay a heavy cost for invading Ukraine, on a scale that has not been previously seen after past Russian aggression. But Biden’s comments differentiating between a full-scale invasion and a “minor incursion” appeared to publicly undercut that sentiment.

“There’s some truth there, which didn’t need to be said out loud,” a NATO diplomat told CNN. “But then again, it’s not like the Russians didn’t know that say, a cyber-attack against Ukraine, wouldn’t trigger a full scale response.”

White House press secretary Jen Psaki also sought to clean up Biden’s comments after Wednesday’s news conference. “If there is any movement of military troops across the border into Ukraine, if they go into Ukraine and invade, that is an invasion. There will be severe economic consequences,” Psaki said in an interview with Fox.

The Biden administration on Thursday confirmed the transfer of American weapons from allies in the region to Ukraine amid concerns about a potential Russian invasion. The administration also rolled out new sanctions against four current and former Ukrainian officials, including two current members of parliament, who the US accuses of taking part on Russia’s disinformation campaign against Ukraine.

Blinken was in Berlin on Thursday meeting with officials from France, Germany and the UK ahead of his meeting in Geneva Friday with Russian Foreign Minister Sergey Lavrov.

Blinken stressed the importance of standing up against Russian aggression, emphasizing that it’s a threat not just to Ukraine but also to rules-based international principles.

“There’s been a lot of speculation about President Putin’s true intentions, but we don’t actually have to guess — he’s told us repeatedly. He’s laying the groundwork for an invasion because he doesn’t believe that Ukraine is a sovereign nation,” Blinken said.

Vice President Kamala Harris said on ABC’s Good Morning America Thursday, “We will interpret any violation of Ukraine’s sovereignty and territorial integrity by Russia and Vladimir Putin as an aggressive action and it will be met with costs, severe and certain.”