By: Celina Tebor
In: Uncategorized
With: 0 Comments 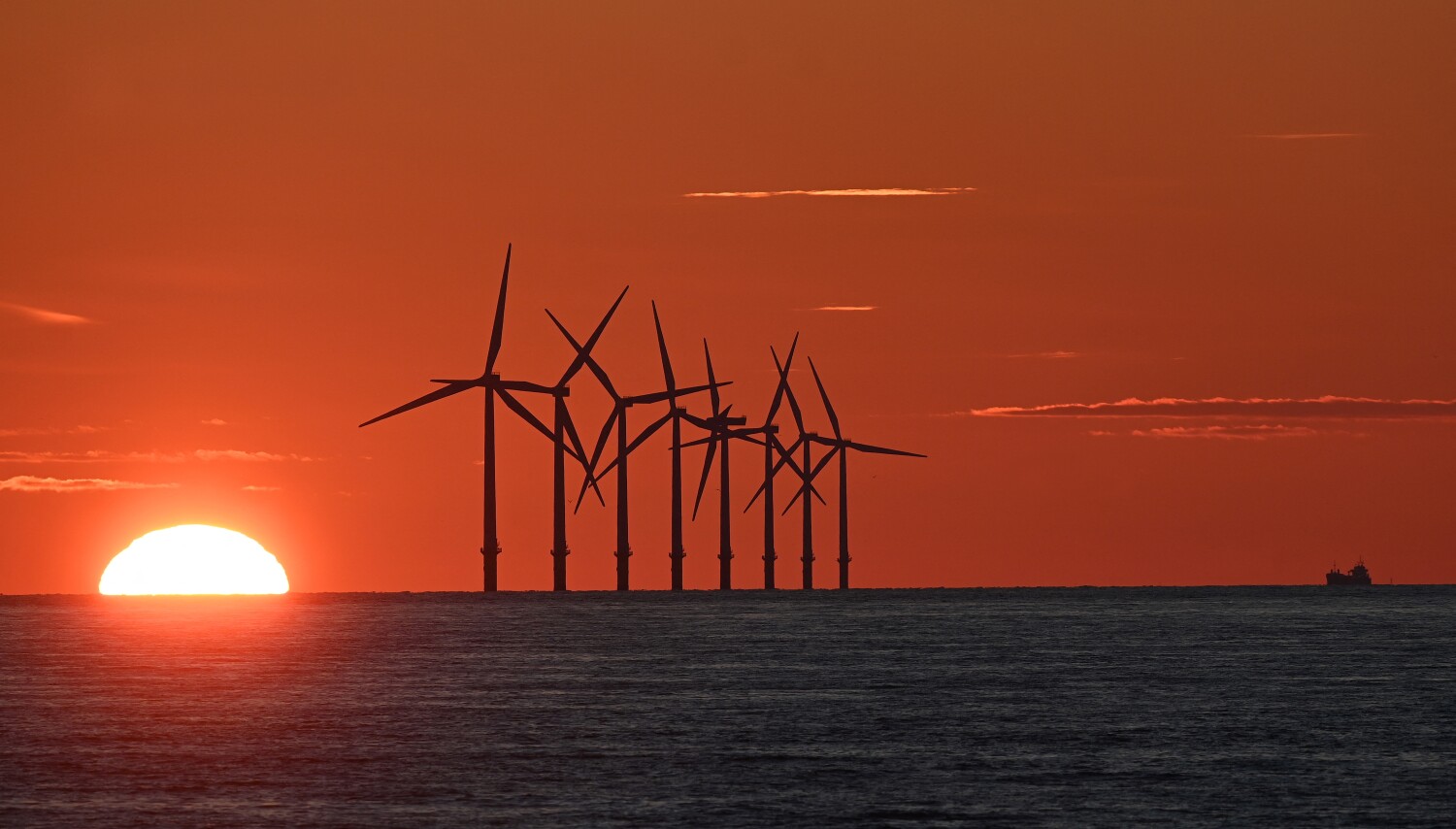 As the world struggles to provide cleaner, less expensive energy sources, some countries are exploring more use of wind power as a key option.

The Biden administration this year pledged to increase the United States’ use of offshore wind energy, with a goal of doubling use by 2030 to 30 gigawatts, which could power about 10 million American homes annually.

Wind energy is renewable, which means it replenishes itself naturally (other examples include solar energy via sunlight), and studies find its costs are falling. The International Renewable Energy Agency, an intergovernmental organization, anticipates offshore wind costs will fall by 55% by 2030, to 5.4 cents per kilowatt hour from about 11.5 cents per kilowatt hour.

“That puts it within the striking range of natural gas,” said Elizabeth Henry, president of the Environmental League of Massachusetts.

Wind energy is produced with the help of spinning turbine blades and other equipment that generate electricity. Onshore winds can be obstructed by hills or buildings, analysts say, whereas offshore wind farms that operate in the ocean generally result in stronger and steadier winds and produce more electricity.

The most significant growth in global offshore wind energy has been within the last decade, according to the U.S. government-funded research company National Renewable Energy Laboratory. Although wind production remains relatively low in comparison with nonrenewable resources such as natural gas and coal, the pace of growth is attracting global attention.

The global wind energy industry grew by more than 53% from 2019 to 2020, and investment in offshore wind totaled $303 billion in 2020, said the Global Wind Energy Council, an international trade association.

The U.K., Germany and China had the largest capacities, meaning the amount of energy produced if generators were running at full blast, to produce offshore wind energy in 2019, said the National Renewable Energy Laboratory. As other countries develop the increasingly cheap, and renewable, energy source, the U.S. could lag behind, the think tank Bipartisan Policy Center warned in a July report.

“Absent a concerted national effort to deploy this technology, the United States risks falling behind northern Europe and China, which currently lead the world in offshore wind,” the report reads.

In a July 29 hearing of the U.S. House Foreign Affairs Committee, Rep. Ted Deutch, a Democrat from Florida, said that most renewable energy technology is manufactured with rare earth minerals, such as neodymium and dysprosium used to create wind energy generators — resources that China has a stronghold on.

“The market for that is monopolized by China, and I’m hopeful that the U.S. and EU can work to forge supply chains, recycling environmentally sound development of these critical minerals,” he said.

In the U.S., wind energy development has largely been left to the states: They’re responsible for the majority of project planning and execution, and approval comes from the federal side. Massachusetts leads the way nationally for the most planned offshore wind pipelines, holding nine leases with the Bureau of Ocean Energy Management.

Some energy resources analysts say more involvement by the federal government is essential for efforts to succeed.

“It has not been that feasible for a single state to jumpstart this industry in the absence of the federal government,” said Dwayne Breger, former head of the renewable energy division at the Massachusetts Department of Energy Resources and now the clean energy extension director at University of Massachusetts Amherst. “Now we have the federal leadership that is new and will allow us to begin to build out the offshore wind project and industry in the U.S.”

Achieving President Biden’s pledge of doubling the offshore wind energy in the U.S. by 2030 would require increasing steel and factory production, as well as accelerating lease sales, according to the White House.

This year, the U.S. has expanded offshore wind-eligible areas in California and the East Coast, and plans to lease at least 16 offshore wind farms by 2025, which the White House says would meet almost two-thirds of the 2030 energy goal.

The pushback that ended one offshore project

Many supporters and opponents of offshore wind have their eyes on Vineyard Wind, which would be the nation’s first commercial-scale offshore wind project if successful. The Bureau of Ocean Energy Management approved it in May.

Plans for the project include installation of 62 turbines 15 miles off the southern coast of Cape Cod, Mass. It would meet 10% of the state’s power needs at full operation, or power about 400,000 homes, according to the development company. Most of the state’s energy currently comes from natural gas and ethanol.

Over the course of 10 public meetings and requests for comment by the Bureau of Ocean Energy Management, more than half of comments from residents, business owners, government agencies and the general public supported Vineyard Wind. But some in the fishing industry say it will endanger their livelihoods, and a solar energy company sued the federal government in July saying it overlooked dangers that could harm endangered species and drive out the fishing industry in the area.

The controversy is reminiscent of the Cape Wind project, proposed in 2001. It was to be constructed about five miles off the coast of Cape Cod, in the center of Nantucket Sound, a popular area for boating and fishing.

Throughout its 16 years of project development, Cape Wind was subject to dozens of lawsuits and opposition from property owners on the coastline. In a 2005 op-ed to the New York Times, Robert F. Kennedy Jr. cited the obstructed view of Nantucket Sound, the high price of offshore wind, and the negative impacts to the environment and fishing industry as reasons for opposing the project, echoing common concerns of residents.

The unrelenting legal action was effective: It delayed the project by years, and Cape Wind eventually lost its contracts. The $2.6-billion project was abandoned in 2017 before construction began.

New opposition to offshore wind, and its future in the U.S.

The most vocal opposition to the new offshore wind project is from some members of the fishing industry. The Bureau of Ocean Energy Management anticipates that commercial fisheries will abandon the entire 75,614 acre area around Vineyard Wind. The turbines will be one nautical mile apart, too close together for some boats to navigate safely.

Hundreds of seafood industry workers from across the country signed on to a letter demanding a five-year moratorium on all offshore wind developments. Fishing groups such as the Garden State Seafood Assn. and the Long Island Commercial Fishing Assn. have called for the same.

Tom Dameron, the government relations liaison for Surfside Seafood Products, said the impact of Vineyard Wind down the line would be “catastrophic” for his company.

“There is going to be localized overfishing that will lead to the targeting of younger and younger clams, which will eventually lead to the collapse of the fishery,” Dameron said.

Vineyard Wind has set up a compensation fund for fishers, but Dameron says it’s not enough to offset productivity loss. He’s worried about the domino effect it could have, leading to more offshore wind farms across the coast and fewer areas for his company to harvest clams.

Vineyard Wind is expected to begin offshore construction in 2022, and the U.S. has many other offshore wind projects in the works: 2020 saw more than triple the amount of planned offshore wind energy than 2019.

Biden plans to initiate up to 10 more environmental reviews for offshore wind projects in 2021, a critical step in advancing them. The Bureau of Ocean Energy Management has 18 active leases for offshore wind farms in the U.S., all of which are on the East Coast and were leased within the last decade.

2022-04-07
Previous Post: An Australian Sheep Farmer Uses His Animals To Offer A Tribute To His Late Aunt : NPR
Next Post: 8 dead in explosion at military camp bar in eastern Congo