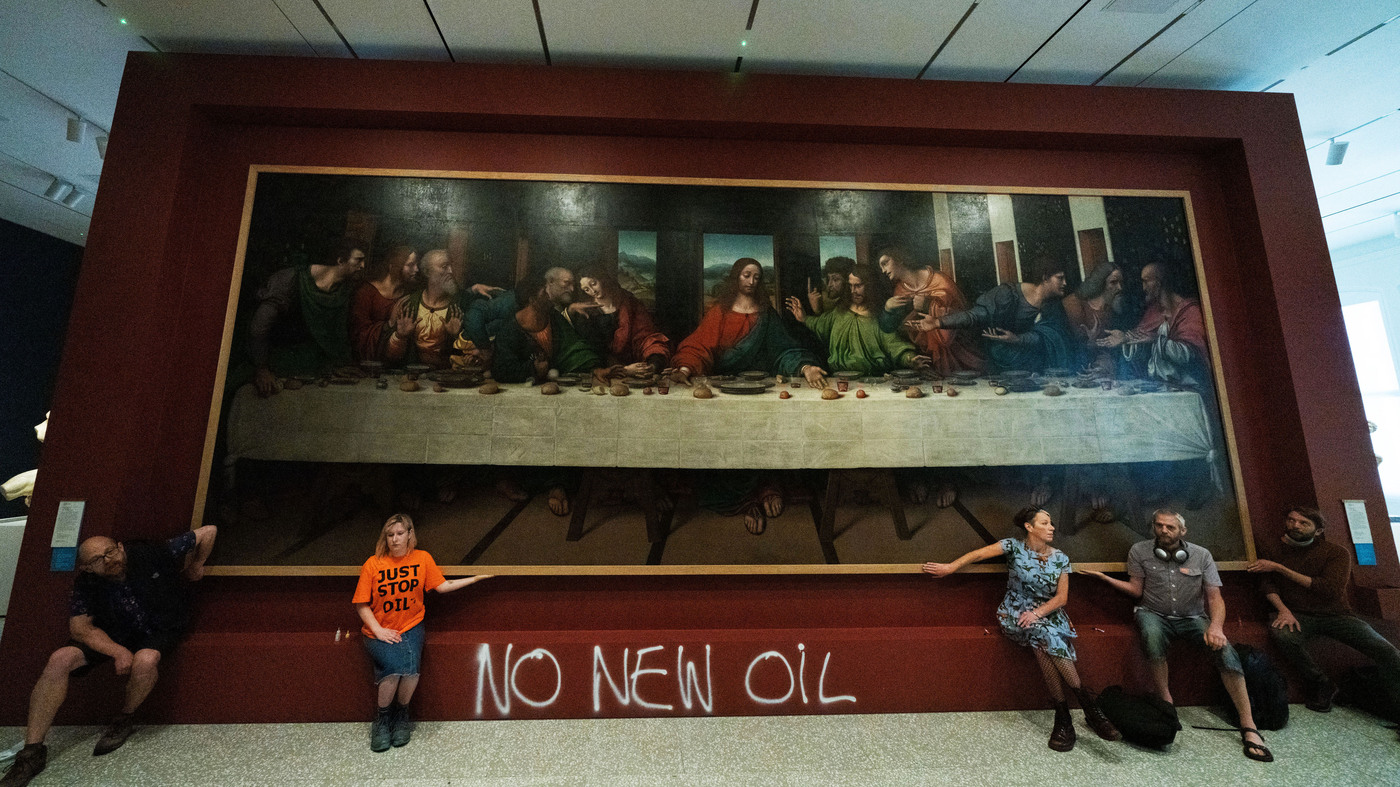 U.K. climate protesters glued themselves to a 500-year-old painting : NPR

Five Just Stop Oil activists spray paint the wall and glue themselves to the frame of the painting The Last Supper on Tuesday at the Royal Academy in London.

Five Just Stop Oil activists spray paint the wall and glue themselves to the frame of the painting The Last Supper on Tuesday at the Royal Academy in London.

With a bit of glue and spray paint, protesters took action at a gallery at London’s Royal Academy of Arts to demand greater government action on climate change.

A group of at least five activists from the group Just Stop Oil spray painted “No New Oil” underneath the painting Copy of Leonardo’s The Last Supper and glued their hands to the artwork’s frame. The painting depicts the scene from the Bible when Jesus holds his last supper with his Twelve Apostles and tells them that one of them will betray him. The 500-year-old copy of Leonardo da Vinci’s masterpiece has been attributed to da Vinci student Giampietrino, and painter Giovanni Antonio Boltraffio may have also worked on it.

The protesters that targeted the painting on Tuesday called on their nation’s government to commit to immediately ending all new oil and gas licenses in the U.K., according to a video showing the demonstration. They also called on members of the nation’s art institutions to support a “peaceful civil resistance,” Just Stop Oil said in a statement.

This is just the latest action in a spree of other moves by the U.K. group. Activists from the same organization have recently glued themselves to a painting in Glasgow, to a Vincent Van Gogh painting in London, a painting at the Manchester Art Gallery, and another at the National Gallery in London.

This past weekend six more activists from the same group were arrested following a protest on the track of a Formula 1 race at the Silverstone Circuit in England, according to the BBC.

The group says it’s turning to such public displays of protest to pressure global leaders to adhere to promises to cut greenhouse gas emissions in order to curtail global warming.

Global leaders had agreed to limit the world’s warming to 1.5 degrees Celsius (2.7 degrees Fahrenheit) by 2100. Scientists say the most catastrophic effects of global warming can be prevented if successful, but the world is not on track to meet that target.

“We have no time left, to say that we do is a lie. We must halt all new oil and gas right now, we will stop disrupting art institutions as soon as the government makes a meaningful statement to do so,” Lucy Porter, 47, a former primary teacher from Leeds that participated in the demonstration, said in a statement provided by Just Stop Oil. “Until then, the disruption will continue so that young people know we are doing all we can for them. There is nothing I would rather be doing.”

The Royal Academy of the Arts didn’t immediately return NPR’s request for comment. It’s unclear if the painting suffered any damage as a result of the demonstration.