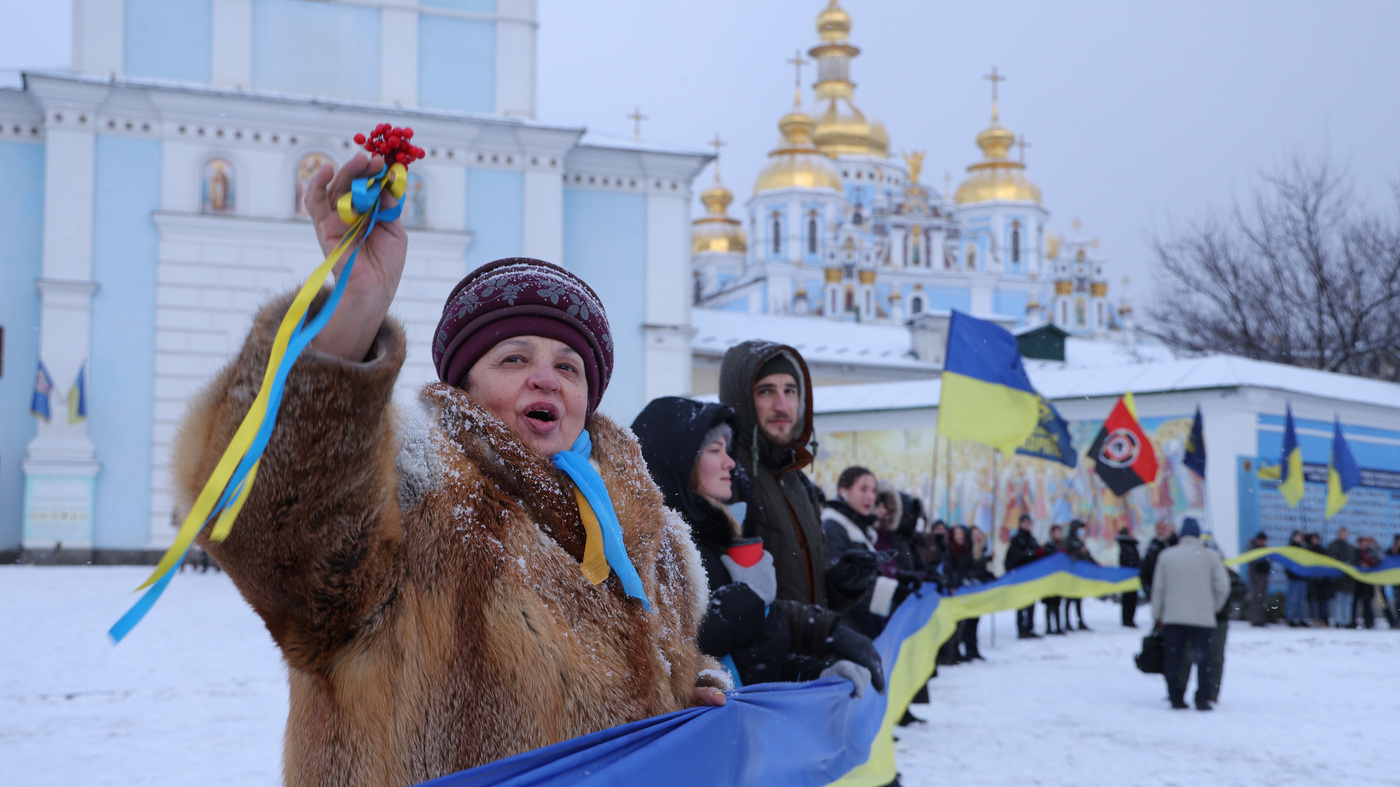 U.K. accuses Russia of plotting to install a pro-Kremlin leader in Ukraine : NPR

People rallying in patriotic support of Ukraine hold a 500 meter long ribbon in the colors of the Ukrainian flag outside St. Michael’s Golden-Domed Monastery on Unity Day on January 22, 2022 in Kyiv, Ukraine.

People rallying in patriotic support of Ukraine hold a 500 meter long ribbon in the colors of the Ukrainian flag outside St. Michael’s Golden-Domed Monastery on Unity Day on January 22, 2022 in Kyiv, Ukraine.

The situation along the Russia-Ukraine border remains tense, as Russia has amassed an estimated 100,000 troops just across the divide while Ukraine’s outnumbered military prepares to defend itself against a possible invasion.

Adding to the turmoil, the British government revealed details on Saturday of what it called an alleged Russian plot to install a pro-Kremlin leader in the Ukrainian capital of Kyiv.

The U.K. Foreign Office said it also had information that Russian intelligence services remained in contact with several former Ukrainian politicians, including an ex-prime minister.

“The information being released today shines a light on the extent of Russian activity designed to subvert Ukraine, and is an insight into Kremlin thinking,” Foreign Secretary Liz Truss said in a statement.

Russia’s Ministry of Foreign Affairs called the allegations “disinformation” and “nonsense” in a tweet on Saturday and said it was another example of Western nations escalating tensions around Ukraine.

Andrea Kendall-Taylor, a fellow at the Center for a New American Security and a former senior intelligence officer, told NPR’s Weekend Edition Sunday that it’s fair to question the details of the U.K. report, but that interfering in Ukraine’s government is consistent with what Russia appears to want to accomplish in the region.

“What Russia wants is to have some autonomy in the East that would give Russia a veto over Ukraine’s foreign policy, and they’re looking for a guarantee that Ukraine will not join NATO,” Kendall-Taylor said. Doing so would likely require toppling the government of Ukrainian President Volodymr Zelensky government, she said, “and/or securing a demanding military position that can help Russia extract those demands from Kyiv and the United States and NATO.”

NPR’s Central Europe Correspondent Rob Schmitz reports that the mood in Kyiv is one of “patient resolve,” with restaurants full and children sledding on snow-dusted hills. It’s not that citizens are naive about the possibility of a military incursion, but rather that Ukrainians have said they’ve adjusted to life under the constant threat of Russian aggression.

“We have been living in a state of war for the last seven years going on eight now,” Lesia Vasylenko, a Ukrainian member of parliament, told NPR.

“Physically, psychologically, emotionally, it would be impossible if all of us up to now would be still stressed, would be concerned 24/7 and showing signs of anxiety. You would see a different Ukraine then,” she said.

Russia has said it has no plans to invade Ukraine, but the build-up of Russian troops along the border has prompted the U.S. to provide Ukraine with increased military aid for national defense.

A nearly 200,00-pound shipment of “lethal aid” approved by President Biden, including ammunition for Ukraine’s front-line troops, arrived in the country over the weekend, the U.S. Embassy said.

Pope Francis has called for an international “day of prayer for peace” on Wednesday, urging politicians to find a nonviolent solution to the crisis and expressing concern over the security of Europe.

Meanwhile the head of the German navy has resigned after saying that Ukraine would not be able to regain the Crimean Peninsula, which Russia annexed in 2014, and suggesting that Russian President Vladimir Putin deserved “respect,” according to the Associated Press.