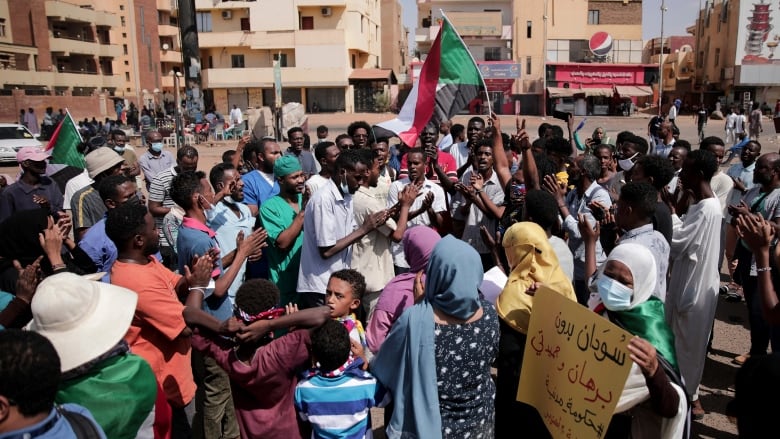 Sudanese security officials shot dead two people during a protest against a recent military coup in the country on Saturday, according to the Medical Workers’ Union. The West has repeatedly called on Sudan’s new military leaders to be patient and allow peaceful protests, but gunfire has erupted.
During the protests, thousands of Sudanese took to the streets in protest of the military coup earlier this week, chanting “revolution, revolution” to the sound of whistles and drums, threatening to disrupt the country’s transition to democracy.
Pro-democracy groups have called for mass protests across the country to demand the reinstatement of a resigned transitional government and the release of high-ranking political officials.
The United States and the United Nations have called on Sudan’s powerful leader, General Abdel Fattah al-Burhan, to exercise restraint and warn that military action against protesters is a challenge.
God has said that the transition to democracy will continue, even if it is military, and that a new technocratic government will soon be formed. Sudan’s pro-democracy movement fears that the military will appoint politicians under its control as it has no plans to weaken.

Protests on Saturday were likely to increase pressure from the United States and other Western countries on generals who are increasingly condemning the resumption of civilian-led governments.
Demonstrators are demanding a civilian government
On Saturday afternoon, crowds began to gather in Khartoum and its twin city, Omdurman. Demonstrators chanted slogans such as “Surrender, my God,” “Revolution, revolution.” Some held placards reading “No Retreat.”
The demonstration was called the Sudan Professional Association and the Resistance Committee. Both were at the forefront of the 2019 uprising that toppled longtime autocrat Omar al-Bashir and his Islamist government.

They are demanding the dissolution of the now-ruling military council, led by God, and the transfer of government to civilians. They are also seeking to disband paramilitary groups and restructure the military, intelligence and security services. They want the resignation of officers loyal to Bashir.
According to the Sudanese Medical Committee and the professional association, security forces shot dead two people in the city of Omdurman. One was shot in the head and the other in the abdomen.

Mohammed Yousef al-Mustafa, a spokesman for the Association of Professionals, said tear gas was used against protesters crossing the Manchia Bridge over the Nile to reach downtown Khartoum on Saturday.
Prior to the protests, security forces blocked major roads and bridges connecting Khartoum’s districts. Security was high outside the city center and the military headquarters, which was a major camp during the 2019 uprising.
There have been street protests every day since the military took over. At least nine people have been killed in a shooting by security forces, according to a Sudanese medical committee and activists. The United Nations says more than 170 people have been injured.

There were fears that security forces might use violence again to disperse the protesters. Since Monday’s coup, soldiers have used live ammunition, rubber bullets and tear gas against protesters. They also beat protesters with sticks and whips.
The military is under pressure and patient
Representatives of the United Nations and the United States called on the military to be patient.

On Twitter, Perthes stressed the need for peaceful demonstrations and avoidance of confrontation during talks with Dagalo.
Clement Nyaletsossi Voule, the UN special rapporteur on the right to peaceful assembly and freedom of association, also called on security forces to refrain from violence against protesters. “If too much force is used against the protesters, they will be held accountable. We are monitoring,” he warned.
God saw the growing divisions between political groups and said that it was necessary to seize power in order to prevent a civil war. However, he took office less than a month before the transfer of control of Sudan’s main decision-making body, the Independent Council, to civilians. Such a move would reduce the country’s military grip. The council included both civilians and the military.
As part of the coup, God fired the council and the transitional government, led by Prime Minister Abdullah Hamdok, who was in charge of day-to-day affairs. He also declared a state of emergency across the country and the military authorities virtually shut down internet and mobile phone services. According to the NetBlocks Internet Access Promotion Group, the internet connection was still severely disrupted on Saturday.