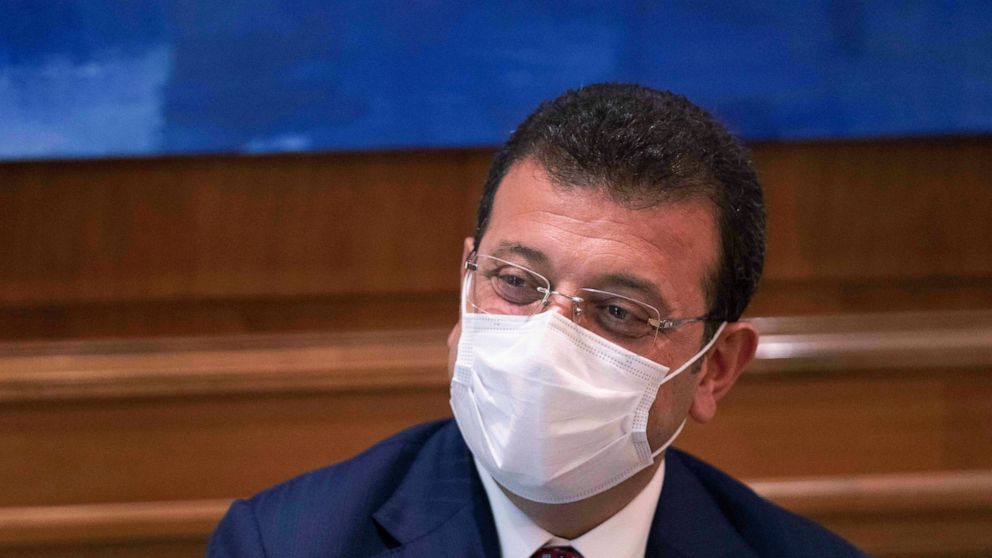 ISTANBUL — A Turkish court accepted an indictment against suspects from a religious association Thursday in a case that could have political and legal repercussions on the opposition-held Istanbul municipality.

The trial against 23 people involved with DIAYDER, which stands for Religious Scholars Mutual Aid and Solidarity Association, for purported links to outlawed Kurdish militants will begin on Feb. 18. Nine of the defendants are in pre-trial detention and some are said to work for the Istanbul municipality.

The indictment as well as an Interior Ministry probe announced Sunday against hundreds of municipal staff for alleged terror links has prompted worries that the government could be laying the groundwork for targeting popular mayor Ekrem Imamoglu, who is seen as a possible challenger to Turkish President Recep Tayyip Erdogan in elections scheduled for 2023.

Secular opposition Republican People’s Party’s Imamoglu came to power in 2019 in re-run elections after Erdogan’s ruling party contested his win, dealing a massive blow to Erdogan in Turkey’s most important city. The opposition party has recently raised its criticism of the government’s economic and political moves, calling for early elections, while Erdogan continues his openly hostile rhetoric against them as well.

The 335-page indictment, accepted Thursday, said DIAYDER followed purported instruction by Abdullah Ocalan, the jailed founder of the Kurdistan Workers’ Party or PKK, for setting up an alternative religious structure to Turkey’s official religious authority in order to garner support from religious Kurds. DIAYDER worked to endanger the territorial sovereignty of Turkey since 2013 and allegedly supported an “independent Kurdistan,” the indictment claims.

The indictment states that people with links to the association were employed as imams and bathers for the deceased in preparation for Islamic funerals by the Istanbul Metropolitan Municipality. It also says some of the suspects were handing over municipal aid to families with PKK links.

Turkey’s Interior Ministry said Sunday it has launched a “special investigation” against 557 employees of the Istanbul municipality and linked companies. They are accused of links to terror groups, including the PKK, far-left groups and the network of Muslim cleric Fethullah Gulen, who the government blames for the 2016 coup attempt. The investigation also includes municipal employees who were allegedly hired through DIAYDER references.

Minister Suleyman Soylu said they had identified people with terror links among employees and argued the move was combating terror, including in public institutions. “It’s not political, it’s a security issue,” he said.

Imamoglu, defending his 86,000 employees, called for Soylu’s resignation. He said municipality staff must present criminal records, obtained by the Justice Ministry, in order to be considered for employment and had asked the Interior Ministry to provide lists of suspects and information to investigate but had not heard back.

Last week, Erdogan accused Imamoglu of employing 45,000 people, including some with alleged terror links. The mayor, in turn, said the municipality had employed a total of 21,179 new people.

Meanwhile, other opposition mayors came out in support of Imamoglu. They said “unjust and baseless claims” aimed to create suspicions on their municipalities and were part of “dirty politics.”

Ozgur Ozel, parliamentary group leader of the Republican People’s Party, repeated calls for early elections after criticizing the indictment, which he said was based only on two secret witnesses and a convicted PKK member. He accused the ruling party of trying to replace the mayor of Istanbul with a government-appointed trustee instead of going to the polls.

The government has replaced and jailed numerous elected mayors from the pro-Kurdish Peoples’ Democratic Party, the second largest opposition in parliament, for alleged links to the PKK. The PKK, which has waged an insurgency in Turkey since 1984, is considered a terrorist group by Turkey, the United States and others. Since the 2016 failed coup attempt, tens of thousands of people have been investigated, jailed or sacked from government jobs for purported terror links.