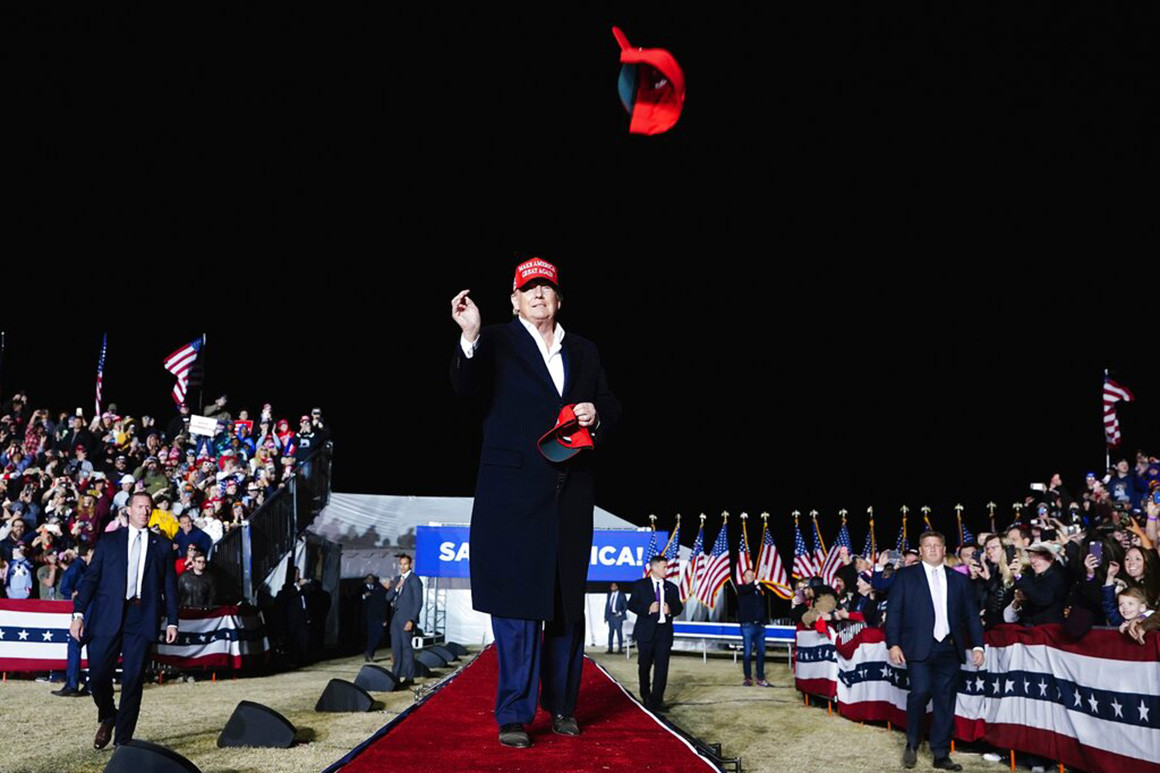 Former President Donald Trump kicked off his first midterm-year rally in Arizona — a state to watch in 2022 — still laser focused on the presidential race he lost and the politicians that supported or thwarted his efforts to overturn the election.

The Saturday evening event was positioned to be a rebuttal to President Joe Biden’s searing attacks over the former president’s role in spurring the Jan. 6 attack on the Capitol. Republicans may have caught a break when Trump canceled his planned Jan. 6 address at Mar-a-Lago, but the former president issued a blistering response to Democrats in heavily red Pinal County.

Trump, speaking at a podium emblazoned with “Save America,” opened his speech by falsely claiming “proof” that the 2020 election was “rigged.” As he vowed Republicans will take over the House and Senate in 2022, and sweep governors races across the country, an energized sea of supporters cheered at the Country Thunder festival grounds.

“The fake news and the lamestream media … they refused to talk about it,” Trump said of his false election claims. “They say, ‘well it is unsubstantiated and the big lie.’ The big lie. The big lie is a lot of bullshit. That’s what it is.”

“If an election were held today, we would trounce them so badly in a landslide in every way, just as we really did on Nov. 3. We trounced them. If we had an honest press, the election would have been much different,” Trump said, spreading more falsehoods about the election he lost by over 7 million votes.

The destination of Trump’s first rally in Florence, Ariz., wasn’t accidental. The state is home to ground zero in the “stop the steal” movement’s push to find evidence that the 2020 election was stolen from the former president. State Republican lawmakers from across the country have made the trek to Phoenix to learn more about the Arizona state Senate GOP’s partisan audit of the presidential race, which ultimately ended up affirming Trump’s loss.

House Reps. Debbie Lesko, Andy Biggs and Paul Gosar warmed up the crowd for Trump, attacking Biden and fueling election falsehoods. The crowd cheered as a Republican state senator called for the state’s election results to be decertified.

Trump’s rally was a familiar performance, as the former president attacked everything from the crisis at the southern border to the media. He bounced from inflation to supply chain problems to high crime rates, and he took a few minutes to criticize Biden’s handling of adversaries like Vladimir Putin and Kim Jong Un. He then hit the Biden administration’s withdrawal from Afghanistan and jabbed at former New York Gov. Andrew Cuomo.

Trump spent at least 10 minutes in his meandering speech addressing Covid and vaccine mandates. At one point, he said Biden has made chief medical adviser and frequent conservative target Anthony Fauci a “king,” which the crowd followed with a “lock him up” chant. The former president didn’t once mention the vaccines developed under his administration, though he slammed “gutless” politicians last week for not saying whether or not they had received a Covid booster (Trump has received three vaccine doses).

“Forcing innocent children to grow up in masks … locking people into their homes … going mandate crazy … they’re just running roughshod all over this country,” Trump said. “I say enough is enough, and we are not going to take it any more.”

Saturday’s rally is the second time Trump has put the spotlight on Arizona since leaving office, another sign of the state’s importance as Republicans look to take back both the House and Senate. Trump, who has maintained a strong grip on the GOP and is expected to run in 2024, is known for endorsements that can shape a race.

In Arizona, Trump has endorsed Kari Lake, a former news anchor who says she wouldn’t have certified the 2020 election, for governor. But he’s held off on endorsing a Senate candidate to go up against incumbent Democratic Sen. Mark Kelly. So far, state Attorney General Mark Brnovich, venture capitalist Blake Masters, solar power executive Jim Lamon and state emergency leader Mick McGuire are battling it out for the nomination, and it’s rumored Arizona Gov. Doug Ducey may join the primary, POLITICO reported this week.

Trump didn’t make any endorsements during his rally on Saturday, though he invited Lake on stage and piled on more criticism of Ducey, who he blasted in a statement late Friday over his certifying of Arizona’s election results.

“Your governor is not good. Kari’s the one. She’s going to be fantastic,” Trump said. “But Ducey has been a terrible, terrible representative of your state.”

Trump’s speech came full circle by the end, as he said the “real insurrection” happened on Election Day and blasted the House select committee’s bipartisan investigation into Jan. 6. He then jumped to Democrats’ efforts to expand voting rights and dubbed the legislation a “voting fraud bill.”

Saturday was Trump’s first of many events in 2022: The former president is expected to hold about two rallies per month leading up to the November election, according to an adviser. Trump’s next stop is Conroe, Texas, on Jan. 29.