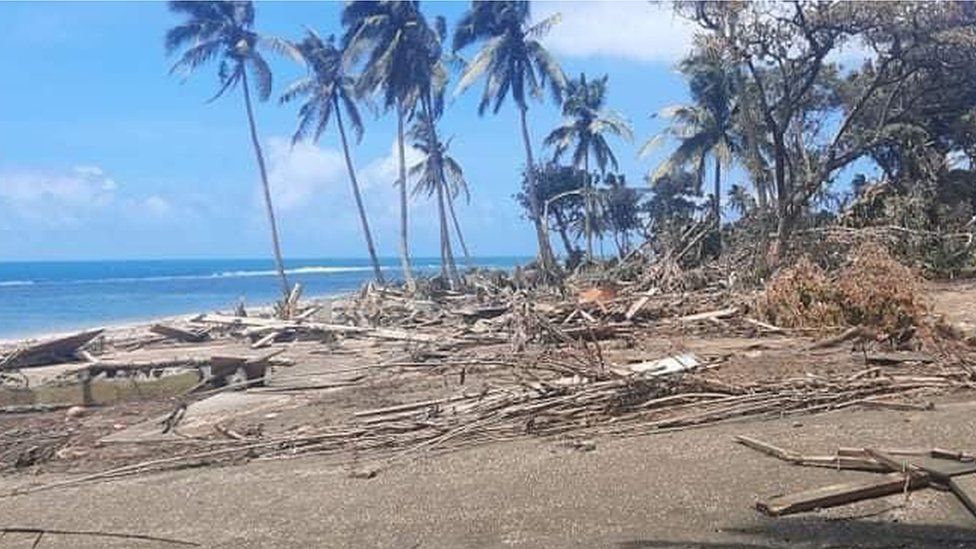 New pictures have emerged from Tonga, revealing the damage wreaked by tsunami waves triggered by an undersea volcano.

They show the Pacific islands blanketed in a layer of volcanic ash, while in coastal areas the waves have torn down trees and ripped buildings apart.

International phone links are said to have been restored but a severed undersea cable may take weeks to fix.

That means Tonga remains largely cut off from the outside world, with little known about the scale of destruction.

But the new images, released by Tonga’s consulate in the EU, show cars, roads and buildings in the capital Nuku’alofa coated in a film of ash. The dust has hampered relief planes from landing and delivering much-needed food and drinking water.

The pictures also show the aftermath of the tsunami waves, described by Tonga’s government as “an unprecedented disaster”, on coastal areas on the island. Debris is scattered across the shoreline, after waves more than a meter tall struck on Tonga.

Aerial images taken by the New Zealand Air Force, meanwhile, indicate that several villages have been wiped out on islands that have yet to be reached.

Ash hampers rescue effort
Teams have been working around the clock to get vital supplies to the region and repair the damaged undersea cable.

Telecom firm Digicel said on Wednesday that it had managed to restore international calls, though the BBC has not been able to able to reach numbers in Tonga.

Full connectivity – including the internet – could take four weeks or more to restore after the sole cable to the islands was damaged in two places.

On Wednesday morning, the Red Cross said it had “joyfully and happily” been able to make contact with its team in Tonga for the first time since the eruption.

“Unfortunately there is devastating news from Tonga overnight with the loss and destruction of homes,” its Pacific Head of Delegation Katie Greenwood told the BBC’s Newsday programme.

Ms Greenwood added that Red Cross teams were working to distribute clean water, and that a recent campaign telling people to cover their rain water tanks to protect them from ash had worked and provided a boost to bottled water supplies.

The first aid ships from New Zealand and Australia are expected to arrive on Friday.

“The most pressing matter that’s come through from the Tongan government is the need for fresh water,” he said.

But Tongan officials have also expressed concern that deliveries could result in a spread of Covid, with the country only recording its first case in October.

There have been reports of food supplies at shops running low and deliveries have been deemed a priority.

The explosion of the Hunga Tonga-Hunga Ha’apai volcano was felt as far away as the US. In Peru, two people drowned in abnormally high waves while beaches near the capital Lima were closed off following an oil spill.

2022-01-19
Previous Post: Omicron Is in Retreat: ‘What’s Next?’
Next Post: Boris Johnson: What is the ‘pork pie plot’ and what does it mean for the UK Prime Minister?