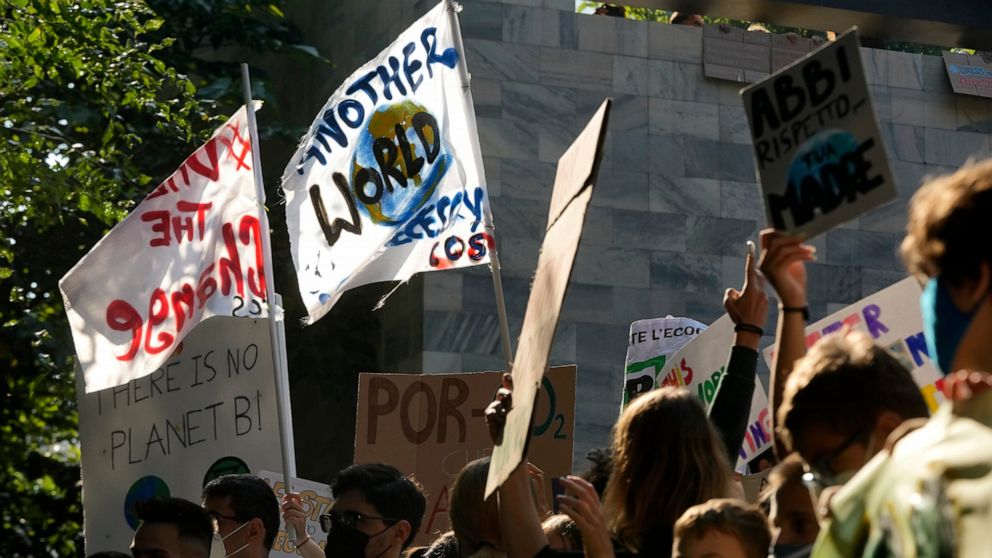 The protest outside the Reichstag in Berlin was part of a string of rallies around the world, from Japan, Indian and Nigeria to Greece, Italy and Britain — amid dire warnings that the planet faces dangerous temperature rises unless greenhouse gas emissions are cut sharply in coming years. Across Germany alone, hundreds of thousands of marchers joined similar protests in several cities and towns.

The idea for a global “climate strike” was inspired by teenage Swedish activist Greta Thunberg’s solo protest in Stockholm three years ago. It snowballed into a mass movement until the coronavirus pandemic put a stop to large gatherings. Activists have only recently started staging smaller protests again.

Thunberg, 18, addressed the Berlin rally from a stage, telling the crowd that voting is important but must be coupled with protests that put politicians under constant pressure.

“We can still turn this around,” she said, to cheers. “We demand change, and we are the change.”

Neubauer has referred to Sunday’s election as the “vote of the century,” arguing that the decisions taken by the next government will influence the country’s efforts to tackle climate change for decades to come. The issue has been a major topic during the election campaign.

Friday’s rally was a multi-generational event, drawing school-age participants as well as adults. Rene Bohrenfeldt, an IT expert at the Berlin rally, said he hoped older Germans would consider the issue when casting their votes on Sunday.

“The majority of voters are older than 50 and determine the outcome of the election,” Bohrenfeldt, 36, said. “I appeal to all grandmothers to make the right decision for the climate and for their grandchildren.”

Civics teacher Anne Kokott, cradling her infant son, Enzo, said she hoped Friday’s large turnout would signal the urgency of dealing with the climate crisis and perhaps have an impact on undecided or older voters.

“Today is important because of the election,” Kokott, 36, said.

Christiane Koetter-Lietz, who attended with her children and grandchildren, said she would be voting for Germany’s Green party, which has campaigned for tougher measures to cut the country’s greenhouse gas emissions.

“We have water catastrophes, fire catastrophes, the world is burning. This is the very last warning,” said the 69-year-old from the western town of Unna.

Across the street from the protest, two young climate activists pressed on with a hunger strike meant to draw politicians into making public commitments on climate policy.

Henning Jeschke, 21, started his fast on Aug. 30, initially as part of a group of seven, with the others having since dropped out, most this week. In their place, another hunger striker joined Jeschke. Both have said they would escalate and begin refusing liquids.

Organizers initially said Jeschke and Lea Bonasera would stop taking liquids Thursday evening, but Jeschke’s father, Eckart, said the more severe protest is to begin Saturday morning. The hunger strikers are demanding that Olaf Scholz of the Social Democrats, seen as a front-runner for becoming Germany’s next chancellor, acknowledges publicly that the country faces a climate emergency.

A German government official said pressure from young climate activists already had resulted in concrete policies in recent years, from higher carbon prices to billions of euros (dollars) being invested in greener technologies.

In Prague, the Czech Republic’s capital, hundreds of students and environment activists shouted “Now or never,” and displayed banners with slogans and statements such as “Climate justice,” and “We want a healthy planet for our children.”

Small groups of young climate protesters held demonstrations in multiple Indian cities on Friday, calling on politicians and big businesses to ramp up their ambitions for reducing global greenhouse gas emissions and to commit to a raft of climate pledges.

“Just because there is a pandemic doesn’t mean you stop working around the climate crisis,” said Srijani Datta, a youth climate activist in New Delhi.

Global warming also has been a top election issue in Iceland, where voters head to the polls for a general election on Saturday. All parties running for seats in the North Atlantic island nation’s parliament acknowledge global warming as a force of change in a sub-Arctic landscape but disagree on how to respond to it.

While many of the protests worldwide were restrained family affairs, activists in Britain blocked the country’s busiest ferry port Friday to highlight the climate crisis, as well as fuel poverty in the U.K.

Karel Janicek in Prague and Rishabh R. Jain in New Delhi, India, contributed to this report.

2022-08-08
Previous Post: Strip-Searches of Children by London Police Are Called ‘Deeply Concerning’
Next Post: Huawei CFO Held In Canada Resolves Criminal Charges In A Deal With The U.S. : NPR