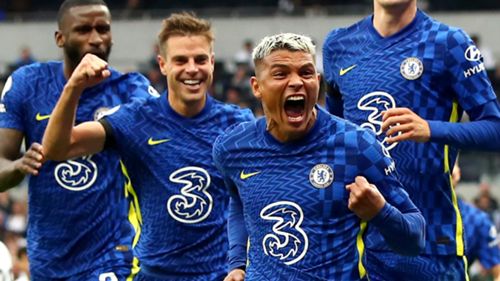 Chelsea marches on. The defending European champions registered their leatest shutout win, this time on the road in a London derby against Tottenham Hotspur, 3-0. Chelsea joins Liverpool and Manchester United atop the Premier League table on 13 points, but the Blues sit on top on a tiebreaker.

Thiago Silva scored on a corner-kick header four minutes after the halftime break and N’Golo Kante saw his shot deflected for a goal less than 10 minutes later to set the Blues on their way. The rest of the affair was an exercise in game management, which Chelsea has perfected under head coach Thomas Tuchel. And Antonio Rudiger added a third for good measure.

Tottenham opened strong and its pressure had Chelsea frazzled to start the match. Giovani Lo Celso missed an incredible early chance in the Chelsea box, Harry Kane saw a dangerous free kick blocked by the wall and Sergio Reguilon led a break which was defused by excellent Chelsea defending.

“The first half we were very good,” Tottenham manager Nuno Espirito Santo said after the match. “The first half we competed well and we were the better team pressing high and creating situations. For 50 minutes we held on. After the first goal, the game changed. It became very hard for the boys … The idea was that we clearly needed to start the match really strong and we did it with really good pressing, recovering the ball and creating situations. The plan was to score. There were chances to do it and we didn’t do it. But the first half — fantastic.”

Then at halftime, Chelsea manager Thomas Tuchel brought on N’Golo Kante, whose introduction as a third midfielder helped tip the balance of play in Chelsea’s favor after a fairly even opening stanza. As soon as the first goal hit the back of the net in the 49th minute there was a feeling that it would be enough for the visitors to see out the result. The second goal by Kante put the game away and there was no coming back for Spurs, who only had one shot on goal after going down.

Chelsea played the game without starting goalkeeper Edouard Mendy, who could not overcome the knock suffered against Zenit Saint Petersburg in the Champions League. Kepa Arrizabalaga filled in capably for him.

Final: Tottenham 0, Chelsea 3
92nd min.: Goal Chelsea! On the ensuing corner, the ball circulates to Timo Werner on the right, and his cross finds Antonio Rudiger for the low, angled finish. It’s 3-0.

91st min.: Big chance for Mateo Kovacic. But Hugo Lloris stops it for a corner.

86th min.: Romelu Lukaku nearly gets his goal. He heads an Antonio Rudiger cross on goal, but it’s right at the goalkeeper. Tottenham are no longer in this game and hasn’t been for some time.

81st min.: Werner is put through by Kante and Hugo Lloris comes off his line to block it. The ball is floated back into the box for Werner, but Lloris thwarts him again.

80th min.: Timo Werner brings down Tottenham’s Bryan Gil from behind and gets a yellow. One caution, one missed chance and one corner earned for Werner in 10 minutes.

78th min.: Lukaku leads a break and feeds Werner, who can’t get the ball off his feet and loses the chance. Lukaku’s reaction makes it clear that he was disappointed with Werner’s there. The German’s first touch failed him (again).

75th min.: Thiago Silva with another corner kick header and Hugo Lloris has to make the save. Chelsea get a couple of more corners after that.

66th min.: Tottenham spending some more time in the Chelsea half, but Thiago Silva & Co. are so tidy with their defending. Good luck to Tottenham trying to find a way through. It’s going to be tough. Striker Romelu Lukaku was even clearing a ball in his own box. This team is committed to defending.

58th min.: SUBS – And now the changes for Tottenham to try to change things up. Bryan Gil on for Giovano Lo Celso and Oliver Skipp on for Tanguy Ndombele.

58th min.: And there’s the second! N’Golo Kante receives the ball near the top of the box and he’s wide open to fire a shot that goes off Eric Dier and past Tottenham ‘keeper Hugo Lloris. It’s a cruel deflection, but Chelsea has dominated the opening of this second half.

53rd min.: Nearly a second for Chelsea! Cesar Azpilicueta gets the ball in the box and Marcos Alonso (yes, left winger Alonso!) in the center of the box puts the ball on net and Tottenham’s Eric Dier clears off the line.

49th min.: Goal Chelsea! Thiago Silva heads home a Marcos Alonso corner and he outjumps Tottenham’s Delle Alli for that ball. What timing for the Chelsea breakthrough four minutes after the break.

47th min.: What a chance for Chelsea! Long ball from Thiago Silva for Marcos Alonso, who sends a volley on goal in stride and Hugo Lloris has to parry for a corner.

46th min.: Second half is underway. Chelsea bring on N’Golo Kante for Mason Mount. Now it’s Jorginho with Kovacic and Kante on either side of him.

Halftime: Tottenham 0, Chelsea 0
Halftime: Tottenham had its chance. Spurs had Chelsea on the ropes in the opening 10-15 minutes, but then the Tottenham pressure eased as the first half progressed and Chelsea had longer periods of possession. But Chelsea could not do much with that possession and the Blues were most dangerous in moments they could counter and run at the Spurs back line. While Mason Mount and Jorginho have had the best ideas on the ball for Chelsea, Kai Havertz has been poor. That could be the first sub for manager Thomas Tuchel, in addition to bringing on N’Golo Kante. Tottenham will be happy with that first half, but we haven’t seen much from the two big stars so far: Harry Kane (Tottenham) and Romelu Lukaku (Chelsea).

45th min.: It hasn’t helped this game that Tanguy Ndombele has a contact lens issue which brought the game to a halt.

43rd min.: The match is fizzling out as it nears halftime with neither team wanting to take much of a risk before the break.

35th min.: When Tottenham is sitting back waiting for Chelsea, Spurs are defensively solid. And they look dangerous when they break through the likes of Son Heung-min. They move quickly when they win the ball back. It’s unclear how Chelsea is going to find a way through. The visitors have looked best when operating on the counter.

33rd min.: Chelsea goalkeeper Kepa comes off his line to stuff Son Heung-min who latches onto a pass into the box. It looked like it could have been offside. Kepa and Son spend some time on the ground after the collision.

26th min.: Chelsea center back Andreas Christensen shows off some fancy footwork outside the box, but his shot is off the target. Still scoreless here. Tottenham still pressing hard, but Chelsea putting more sustained attacks together.

21st min.: Tottenham break through left back Sergio Reguilon, who makes it into the box but can’t find Giovani Lo Celso. It’s an excellent play by Chelsea defender Antonio Rudiger to snuff out the danger.

20th min.: After a strong game in midweek, Tanguy Ndombele is off to a good start, pulling off some nice possession-saving moves.

15th min.: What a break by Chelsea. Lukaku holds up the ball, brings Mount into it and it launches a 3-v-2. Mount gets the final shot in the box and it’s blocked.

11th min.: What a whiff by Kai Havertz! Azpilicueta serves up the perfect ball for the volley in the box, but Havertz doesn’t make contact.

10th min.: Chelsea has yet to get settled in this match so far. Tottenham are chasing and pressing and making life tough on Chelsea. Nuno Espirito Santo promised Spurs would make it tough on the European champs.

5th min.: Harry Kane takes a free kick just outside the box and it goes off the wall for a corner. It doesn’t amount to anything.

1st min.: We’re off. Tottenham Hotspur kick it off.

11:31 a.m.: The tribute at Tottenham Hotspur stadium for Jimmy Greaves:

8:12 a.m.: Chelsea is heading to a stadium where it has been victorious before:

Son Heung-min and Eric Dier reportedly didn’t train all week, but they’re both starting, while the knocks that forced Steven Bergwijn and Lucas Moura out of Thursday’s Conference League match are enough to keep both of them out vs. Chelsea. Spurs are already without suspended defender Japhet Tanganga and Ryan Sessegnon , who’s still battling a hamstring issue.

By comparison, Chelsea is fairly healthy heading into this game with American Christian Pulisic being the only injury absence due to the ankle knock picked up with the U.S. national team. More bad news for Tottenham: All-terrain midfielder N’Golo Kante is back on the bench for the defending European champions. Starting goalkeeper Edouard Mendy will miss the match after sustaining an injury late against FC Zenit in the Champions League.

“Edu got a huge hit [in the last minute vs. FC Zenit] and we tried everything in the last days, but he wasn’t comfortable. Yesterday in training, we decided that if a miracle didn’t happen overnight that Kepa would play,” Tuchel said prior to the match.

2022-07-14
Previous Post: Mexico returns 8 bodies of migrants in Texas truck tragedy
Next Post: Some of the issues that President Biden and Israeli leaders will meet about : NPR