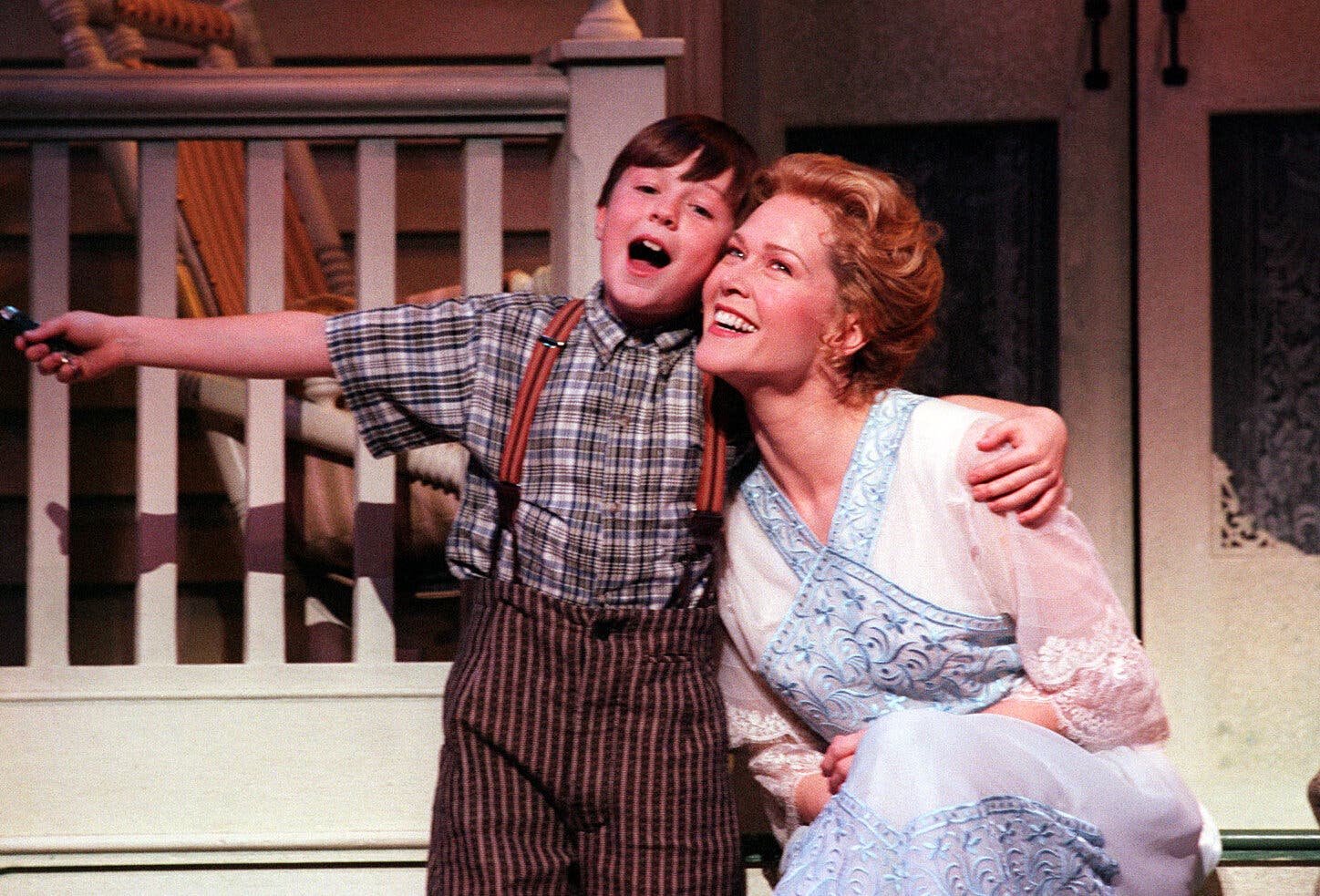 ‘The Music Man’ Once Had a Disabled Character. Then He Was Erased. – ENTERTAINMENT & ARTS NEWS – ZM NEWS CORPORATION

At the urging of producers, Meredith Willson cut a boy in a wheelchair from the early scripts for his 1957 musical. A look back shows what was lost.

Many know Meredith Willson’s 1957 Broadway musical, “The Music Man,” as a light comedy centered on a cheeky scam artist who pretends to be a musician and sells the idea of starting a boys’ band to a small town in Iowa. The show is being revived on Broadway starring Hugh Jackman and Sutton Foster, and will begin performances this month.

But several newly recognized drafts of the musical, written between 1954 and 1957, show that originally, the story focused more on the town’s persecution of a boy in a wheelchair — carrying a much more serious message than the final draft. At the time, children with disabilities were routinely institutionalized in horrid conditions and denied an education.

In the version that debuted in 1957, the only character that doesn’t fall for the scheme is Marian Paroo, a well-read single woman who has a shy younger brother with a lisp, named Winthrop. But the con man, Harold Hill, manages to charm Marian and wins her over in part by being kind to Winthrop and including him in the band.

In the earlier drafts, Marian’s younger brother was a character named Jim Paroo, a boy in a wheelchair who, in some versions of the show, has limited use of his arms and could not speak. Wherever Jim goes, townspeople want to lock him up, and in some versions, this drives him to hide and live in the school basement instead of at home.

Then, Harold comes along and challenges the community’s assumptions about Jim by bringing him into the band and finding an instrument he’s capable of playing with his limited range of motion. An early title for the show, “The Silver Triangle,” highlights Jim’s instrument of choice and contribution to the band.

“I think that Jim was very much at the heart of the show,” said Dominic Broomfield-McHugh, a musicology professor at the University of Sheffield in England who discovered many of the earlier drafts in 2013 at the Great American Songbook Foundation in Indiana. These discoveries were published in May in Broomfield-McHugh’s new book, “The Big Parade: Meredith Willson’s Musicals from ‘The Music Man’ to ‘1491.’” The book explores the musical’s journey from “The Silver Triangle” to “The Music Man” we know today — and has a chapter devoted to the various early drafts of the show.

“When you read the first draft, it feels quite thin until you get to the scenes with Jim or about Jim, and suddenly it becomes very dramatic and serious,” he said. “I still feel astonished when I look at it.”

Most of the songs and scenes in earlier drafts are also significantly different, according to Broomfield-McHugh. In one deleted song, Jim, who is nonverbal in this version of the show, starts to sing onstage alone.

“What Willson was trying to do was to sort of say, even though he can’t physically speak, he has all these thoughts and ideas going around in his head,” Broomfield-McHugh said.

Though Willson’s writing of disability was sometimes gimmicky in ways that could now be seen as offensive — in one scene, music inspires Jim to stand up for the first time — Broomfield-McHugh believes that the playwright was trying to spark a conversation about how people with disabilities were treated at the time.

He found evidence that the playwright had visited organizations for disabled children but couldn’t find any other personal reasons that Willson may have had for writing about this issue.

Just 10 months before the show opened, Willson dropped the character of Jim, replacing him with Winthrop at the urging of producers who felt there was no place for serious representations of disability onstage.

“But I sense such a frustration in him that he really, really tried for years to make it work like this,” Broomfield-McHugh said.

One memo urged Willson to change the character, stating that “physical disability in a child is impossible to view in any terms but pity and sentiment, the problem is to find some other form of disability besides physical.” The memo is undated and unsigned, but Broomfield-McHugh believes it was written in early 1957 by an employee of a producer. He found it in Wisconsin Historical Society archives, tucked in the back of a script that belonged to the producer Kermit Bloomgarden, who took over production of the show in 1957.

Another letter to Willson, written in 1955 by the playwrights Jerome Lawrence and Robert E. Lee, says, “The easy solution is to dump Jim Paroo,” but that doing so “might conceivably reduce a major work to the dimension of mere entertainment.”

Today, audiences can more regularly see disabled actors onstage thanks to efforts by small theater companies like The Apothetae, which produces works centered on the disabled experience; and Theater Breaking Through Barriers, an Off Broadway organization that regularly casts actors with disabilities.

But on Broadway, which can elevate shows into mainstream commercial hits, authentic representations of disability are still few and far between, said Talleri A. McRae, a founder of National Disability Theater.

There have been some successes. Ali Stroker made history in 2019 as the first actor in a wheelchair to win a Tony Award for her role as a flirty fiancée, Ado Annie, in ‘Oklahoma!’; Madison Ferris, who has muscular dystrophy and uses a wheelchair, played Laura in a 2017 production of “The Glass Menagerie.” There was also the casting of a disabled actor in the role of Tiny Tim in “A Christmas Carol” in 2019; a 2015 revival of “Spring Awakening” by Deaf West Theater, which featured deaf and hearing actors side by side; as well as Martyna Majok’s Pulitzer-winning 2017 Off Broadway play, “Cost of Living,” about people with disabilities.

Even with this progress, many disabled characters are not written in well-rounded ways, and actors without disabilities are often cast in these roles, McRae said.

“Look how far we haven’t come,” said Gregg Mozgala, an actor with cerebral palsy and the founder and artistic director of the Apothetae. “Or how far we have yet to go.”

Part of the problem is inaccessibility for acting training programs, said Mozgala, who is also the director of inclusion for the Queens Theater’s program Theater for All, which helps support and train disabled playwrights and actors. In his own acting program at the Boston University School for the Arts, he was the only person who identified as disabled and said many actors with disabilities have been told to sit out of certain classes, such as movement classes, because professors felt uncomfortable teaching students with disabilities.

Another barrier is the perception of audiences. Nicholas Viselli, the artistic director of Theater Breaking Through Barriers, said audiences still feel uncomfortable watching disabled actors or characters onstage. For the plays he stages, he said he often receives donations from people who say they think the work is important but don’t want to come see it.

“When you advertise disability, it becomes a turnoff,” Viselli said. “People are like, ‘I’ll feel bad for them. It will perhaps diminish my experience.’”

In the end, the version of “The Music Man” without Jim was a hit; it won five Tony Awards, including best musical, ran for 1,375 performances and was adapted into an Oscar-winning movie in 1962.

“The Music Man” has since been criticized for making light of its con artist’s problematic, predatory behavior, such as a scene in which he follows Marian home and tries multiple times to seduce her.

The legacy of “The Music Man” may have been different if Willson’s original vision had made it onto the Broadway stage in a way that authentically represented people with disabilities. Many of the stigmas and barriers it tried to confront still persist, according to Penny Pun, the managing director of the National Disability Theater.

“A lot of these works are being put down before they even see the light of day,” Pun said. “So how do we know if they have mainstream appeal? They never get a chance.”