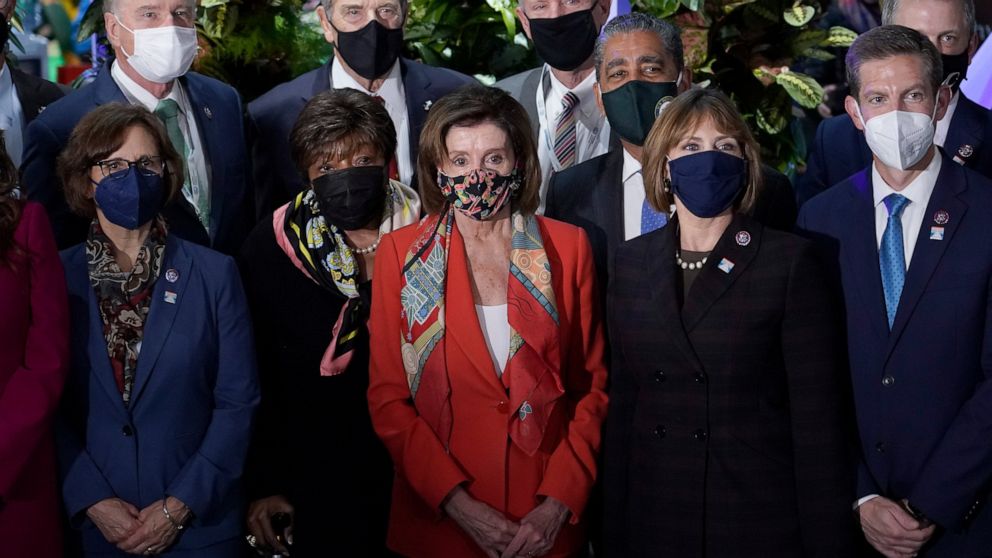 GLASGOW, Scotland — The Latest on the COP26 climate talks in Glasgow:

GLASGOW, Scotland — U.S. House speaker Nancy Pelosi has called for putting women and girls at the center of efforts to fight climate change, saying they are disproportionately affected by the impacts of a warming planet.

Pelosi is leading a delegation of congressional Democrats to the U.N. climate talks in Glasgow this week to send a message that the United States has rejoined international initiatives to curb climate change after the Trump years.

Global warming “is a threat multiplier, amplifying and accelerating existing inequities in our economies and societies,” Pelosi said during a Tuesday meeting focused on gender and climate change.

A report by the U.N. Development Program has estimated that 80% of those displaced by climate change are women.

Pelosi said a a $1.85 trillion package of measures focused on health, family and climate change reflected the Biden administration’s goal to “build back better with women.” Democratic holdouts have the bill currently stalled in Congress.

Echoing President Joe Biden, Pelosi said: “America is back together for the planet, for the women, for our children”

LONDON — The leader of one of England’s few Green Party-run local councils has apologized for taking a plane to the COP26 climate conference in Glasgow.

Phelim Mac Cafferty, who heads the Brighton and Hove City Council, flew from London to Glasgow, Scotland where he made a speech. He also attended a large Saturday protest where participants urged world leaders to act urgently to curb carbon emissions.

Brighton, a city on England’s south coast, is about 460 miles (740 kilometers) from Glasgow, or around six hours by train.

Mac Cafferty told The Argus newspaper in his home city that the decision to fly “was a major failure of my judgement which goes against my political group’s pledges and principles, and I unreservedly apologize.”

GLASGOW, Scotland — U.S. Rep. Alexandria Ocasio-Cortez brought her climate-celebrity star power to the U.N. climate talks, saying she hopes to see the United States reestablish itself as a world leader in the fight against global warming.

Asked if she had a message to young activists who have pressed governments to cut climate-damaging fossil fuel pollution, Ocasio-Cortez told reporters inside the conference site: “Well, I would say, ‘Stay in the streets. Keep pushing.’”

Ocasio-Cortez, a New York Democrat elected to Congress in 2018 on a platform of greatly ramping up U.S. efforts to cut emissions and otherwise deal with Earth’s warming, was accompanying a delegation led by House Speaker Nancy Pelosi.

Members had their first morning at the Glasgow, Scotland talks on Tuesday.

“One of the things we want to achieve is ensuring that the United States really reestablishes itself as a leader, and drives down our emissions,” Ocasio-Cortez told reporters. “And to encourage our partners to do the same.”

The investment, which will be matched with some 250 million pounds($340 million) from the private sector, comes amid hope the small modular reactors could be in use by the 2030s. Such reactors would have the potential to be less expensive and more easily moved, supporters say.

The recipient of the government funds, Rolls-Royce SMR, estimates that each small modular reactor it hopes to build could be capable of powering 1 million homes.

“This is a once in a lifetime opportunity for the U.K. to deploy more low-carbon energy than ever before and ensure greater energy independence,’’ Business and Energy Secretary Kwasi Kwarteng said.

Interest in atomic power has grown along with concerns that the world is reducing greenhouse gas emissions too slowly. But environmentalists have long eschewed nuclear power, citing the lingering issue of what to do with nuclear waste.

BERLIN — Environmental group Greenpeace says it filed a lawsuit against Volkswagen alleging that the automaker has failed to do its part to fulfill the goal of limiting global warming.

Greenpeace said it filed the suit Tuesday at the regional court in Braunschweig, Germany. It said it acted after Volkswagen late last month rejected its demand for a legal commitment to phase out vehicles with internal combustion engines by 2030.

The group said the plaintiffs are “asserting civil liability claims for the protection of their personal liberties, health and property rights.” The claims take a cue from a May ruling in which a Dutch court ordered Royal Dutch Shell to cut its carbon emissions by net 45% by 2030 compared to the 2019 level.

Greenpeace said that by suing Volkswagen, it is enforcing an April ruling by Germany’s top court that said the government must set clear goals for reducing emissions after 2030. The court said the legislation at the time risked placing too much of a burden for curbing climate change on younger generations.

LONDON — Environmental groups are pressing the British government not to approve drilling in an undersea oilfield north of Scotland, saying it threatens marine species and will add to global warming.

Siccar Point Energy, in which oil company Shell has a stake, wants to extract oil from the Cambo field, west of the Shetland Islands.

A collection of 16 marine protection and climate groups, including Greenpeace U.K., WWF U.K., the Marine Conservation Society and Friends of the Earth, are urging the British government to refuse the application.

The Environmental Law Alliance Worldwide says pipelines to export oil from the area could jeopardize hundreds of species, including rare deep-sea sponges, known and ocean quahogs, a type of clam, in a part of the ocean designated a Marine Protected Area.

Plans for new oil extraction and a proposed new coal mine in northern England are overshadowing U.K. government efforts to persuade other countries to take stronger action to cut carbon emissions at the ongoing United Nations climate conference in Glasgow.

The British government says U.K. oil and gas regulators will make the decision, after an environmental impact assessment and a public consultation.

Follow all AP stories on climate change at https://apnews.com/hub/climate.