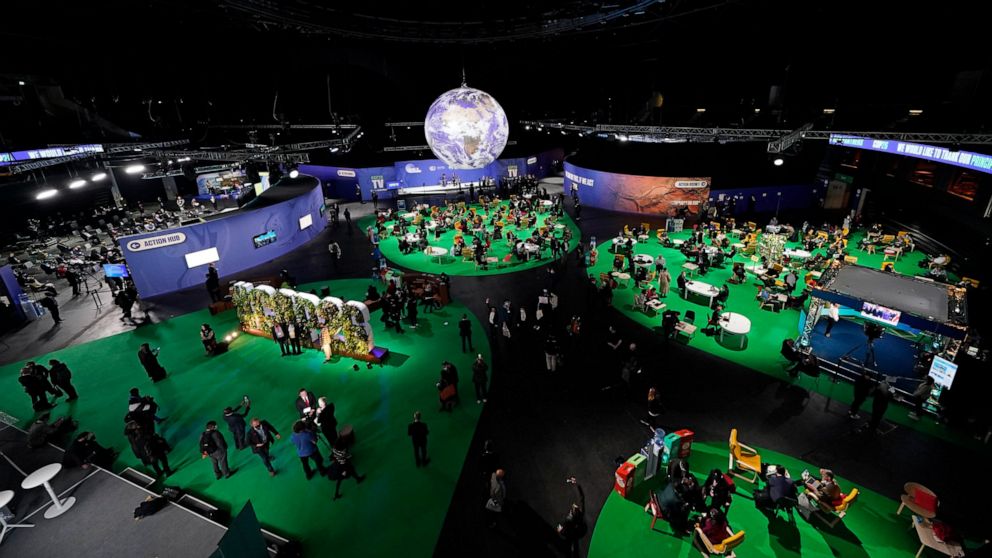 The Latest: EU nations oppose saying nuclear is climate plus

GLASGOW, Scotland — The Latest on the COP26 climate talks in Glasgow:

GLASGOW, Scotland — Five European Union countries on Thursday pushed back against efforts to define nuclear energy as a climate-friendly technology in the 27-nation bloc.

The declaration made on the sidelines of the U.N. climate conference in Glasgow was backed by Austria, Denmark, Germany, Luxembourg and Portugal.

She argued that nuclear power was too risky, too slow and not sustainable.

The five countries said adding nuclear power to the EU-approved list of climate-friendly technologies risked diverting funds from renewable energies such as wind and solar power.

France and several other EU member nations have said they want to use nuclear energy as part of their efforts to phase out fossil fuel plants that are significant sources of greenhouse gas emissions.

GLASGOW, Scotland – Denmark and Costa Rica used U.N. climate talks as the site to launch an international alliance grouping governments that have committed to move their economies away from oil and gas production.

In a statement, Denmark and Costa Rica said they were signing up other nations that were making the transition from climate-damaging oil and gas to cleaner forms of energy.

During the ongoing climate talks in Glasgow, Scotland, numerous countries, including the United States and Russia, have called for climate-saving steps while hesitating on some of the politically and economically delicate steps needed to move more quickly away from fossil fuel production themselves.

Some climate advocates welcomed the new alliance but said the wealthiest economies had to join to make the effort meaningful.

“Committing to reach net-zero emissions while continuing to extract and produce fossil fuels is an epic contradiction that must be called out once and for all,” Nafkote Dabi, a climate policy official with Oxfam, said.

The new alliance “must be led by industrialized countries that have grown rich from decades of extracting and burning fossil fuels,” Dabi said.

GLASGOW, Scotland — Pushing back against the “narrative” of trying to limit warming to 1.5C (2.7F) put forward by rich countries, a group of developing nations said that rich countries were trying to shift the burden of combating climate change onto poorer nations.

The ongoing climate talks in Glasgow were at a point Thursday where two pathways were possible, according to Bolivia’s chief negotiator, Diego Pacheco Balanz: One is good for people and the planet, and the other leads to “carbon colonialism,” he said.

“We need to fight the developed countries against the carbon colonialism,” Balanz said.

Balanz was speaking on behalf of a negotiating block of developing countries called the Like-Minded Developing Countries or LMDC and includes countries from Africa, Latin America and Asia, including China and India.

He said that rich nations were trying to impose new rules like net-zero targets for all countries without taking into account the historic responsibility that richer nations have for climate change. Balanz said poor countries would be “trapped” by such targets because only the rich nations would have the finance or technology to meet them.

GLASGOW, Scotland — The chair of this year’s U.N. climate conference called on negotiators from almost 200 countries to engage in “another gear shift” as they try to reach agreement on outstanding issues a day before the talks are scheduled to end.

British official Alok Sharma said Thursday that fresh drafts released overnight on a number of crunch topics “represent a significant step further toward the comprehensive, ambitious and balanced set of outcomes, which I hope parties will adopt by consensus at the end of tomorrow.”

Sharma said he was “under no illusion” that the texts being considered would wholly satisfy all countries at this stage but thanked negotiators for the “spirit of cooperation and civility” they had shown so far.

“We are not there yet,” he said, adding that he aimed to get a fresh draft of the overarching decision released early Friday.

“Today must represent another gear shift when negotiators finalize outstanding,” Sharma said. “The world is watching us and their willingness to work together and reach consensus. And we know that we cannot afford to fail them”

U.N. climate talks have rarely ended on time in the past.

GLASGOW, Scotland — United Nations Secretary-General Antonio Guterres says the goal of limiting global warming to 1.5 degrees Celsius (2.7 F) is “on life support” as negotiators at a U.N. conference work out the final agreement.

In an exclusive interview Thursday with The Associated Press, Guterres said the U.N. climate talks in Glasgow, Scotland “are in a crucial moment” and need to accomplish more than securing a weak deal that participating nations agree to support.

“The worst thing would be to reach an agreement at all costs by a minimum common denominator that would not respond to the huge challenges we face,” Guterres said.

That’s because the overarching goal of limiting warming since pre-industrial times to 1.5 degrees Celsius (2.7 F) by the end of the century “is still on reach but on life support,” Guterres said. The world has already warmed 1.1 degrees Celsius (2 degrees Fahrenheit), leaving less than a degree before the threshold is hit.

He told the AP that talks in Glasgow so far have not met any of the U.N.’s three goals, but he added that “until the last moment, hope should be maintained.” The conference is set to end on Friday.

A U.S.-China agreement announced Wednesday provided some hope of the negotiations yielding significant progress, he said.

GLASGOW, Scotland — China and the United States have agreed to redouble efforts to fight climate change with “concrete actions,” in a joint statement announced Wednesday in climate talks in Glasgow.

The two biggest carbon polluting countries said their deal calls for “enhanced climate action in the 2020s” using the 2015 Paris climate deal’s guidelines, including a new stronger emission cuts target in 2025. China promised to follow the U.S. lead and crack down on methane.

The agreement calls for “concrete and pragmatic’’ regulations in decarbonization, reducing methane emissions and fighting deforestation.

“Both sides recognize that there is a gap between the current effort and the Paris agreement,” China chief negotiator Xie Zhenhua said in announcing the agreement. “So we will jointly strengthen climate action and cooperation with respect to our respective national situations.”

“We both see that the challenge of climate change is an existential and severe one,’’ Xie said. “We will take our due responsibilities and work together.’’

Xie said using global carbon markets “will be highly helpful” in emission cutting, but that involves a negotiating issue that hasn’t been solved for six years and still hasn’t been settled in talks in Glasgow.

Follow all AP stories on climate change at https://apnews.com/hub/climate.