Moeen Ali propelled Birmingham Phoenix to victory in a record chase against Oval Invincibles in the men’s Hundred at Edgbaston.

Needing 173 to win, the highest chase of the tournament so far, Moeen hit a fierce 49 from 26 balls to send his side top of the table.

The Birmingham captain swung the game in his side’s favour by hitting three consecutive sixes – two off his England team-mate Tom Curran – to delight the home crowd.

That home support was silenced when Moeen fell with 35 needed from 29 balls but rookie Chris Benjamin – the 22-year-old who only made his professional debut last month – carried the Phoenix to victory with 37 not out.

In the end they won by six wickets with six balls to spare – a relatively comfortable margin given the size of their target.

Invincibles would also have topped the table with a win but were left ruing dropping Moeen twice – on three and 20.

Colin Ingram earlier smashed 81 not out, equalling the highest individual score of the men’s tournament, in Invincibles’ 172-3.

Phoenix join Trent Rockets on six points but go top courtesy of their superior net run-rate, although they have played one game more. 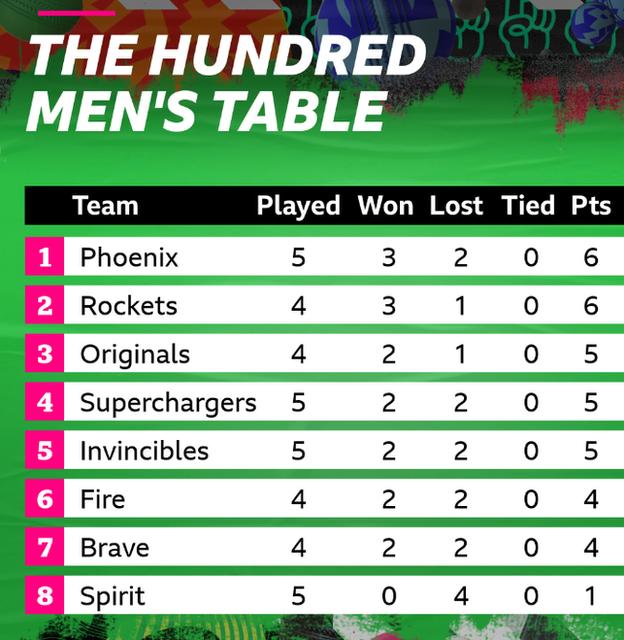 Moeen, hitting sixes, in his home city, in front of a loud Edgbaston crowd? What’s not to love?

At his best the England all-rounder is one of the finest players to watch in the world – hitting the ball with graceful and effortless power.

He came in at 45-2, the visitors firm favourites, but walked off the ground to a huge ovation after playing the decisive hand.

Curran bowled balls 61 to 65 and Moeen took 16 runs from the last three deliveries, hitting two pull shots for big sixes over the leg side. He sent West Indies spinner Sunil Narine over long-on a ball later.

He was grateful for the drops – the first of which was an embarrassing missed chance by another England team-mate, Reece Topley inexplicably spilling a high catch – but on Wednesday night Moeen truly arrived in The Hundred.

‘Diamond’ Benjamin does it again

Benjamin is quickly becoming one of the stories of The Hundred.

On 18 July he impressed on his professional debut for Warwickshire and was then called up to Birmingham’s squad as a late injury replacement.

He got them over the line in thrilling fashion in their opening game, a three-wicket win against London Phoenix. Against the Invincibles he did it again.

“He seems to love those situations that are tight tough and not many people enjoy,” Moeen said.

“We’ve unearthed a couple of diamonds.

“Chris Benjamin looks a really good finisher and Will Smeed was fantastic at the top again today.”

Smeed, Phoenix’s 19-year-old opener, got their chase off to a fast start with a thrilling 45 from 28 balls.

Invincibles should really have had enough runs to win the game. It was their bowling and, to a greater extent, their fielding that cost them.

Ingram impressed with his bruising knock which included eight fours and four sixes.

The 36-year-old South Africa international, who only had 28 runs combined across his previous innings in the tournament, equalled the highest individual score of the men’s tournament so far, set by David Willey just 24 hours earlier.

But worryingly for everyone one else, England’s Jason Roy looks to be finding form too.

He scored 52 not out in Invincibles’ previous game but he spent much of that knock struggling to find the middle of the bat.

Here he was cracking the ball around the ground almost from the start, hitting Moeen for six early in his innings.

Take their catches and Invincibles could still be a side to fear.