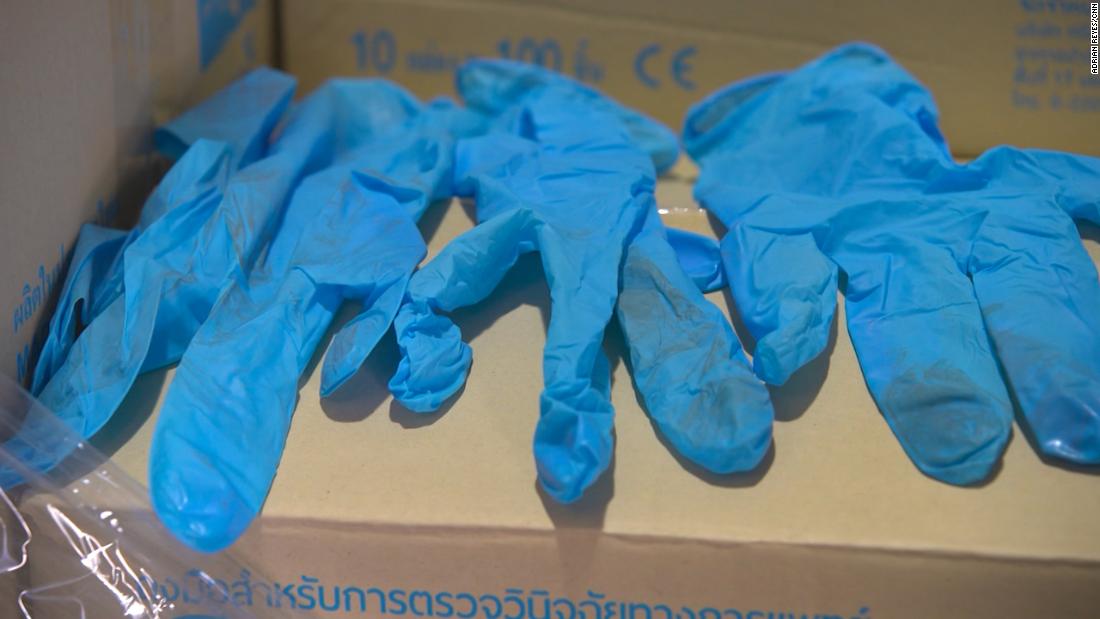 The company brokered deals with American firms to provide millions of dollars of medical grade nitrile gloves, but instead sent lower-quality vinyl or latex gloves hand-packed into boxes claiming they were medical grade. Some were even soiled and clearly second-hand.

Paddy the Room did not respond to multiple requests for comment over several months.

Thai authorities have also ordered an investigation into SkyMed, a brand run by a former Thai military officer.

Thailand’s Central Investigation Bureau (CIB) told CNN it is working closely with the FBI on the SkyMed investigation.

“The Thai government is taking this issue seriously and we are making sure to bring justice to damaged parties,” said CIB Chief Jirabhob Bhuridej.

Some of the gloves sent to people who ordered via Paddy the Room were packed into boxes bearing the SkyMed label.

CNN previously reported that Tarek Kirschen, a Miami-based businessman, had ordered about $2 million of gloves from Paddy the Room late last year. The gloves that arrived were branded SkyMed.

“These were reused gloves. They were washed, recycled,” he told CNN. “Some of them were dirty. Some of them had bloodstains … I couldn’t believe my eyes.”

“Any sub-standard gloves, could be from China, Vietnam or Malaysia. They would bring these gloves in bulk, and they would not declare them as medical gloves. Then these gloves would be repacked as SkyMed and all documents would be doctored and sent to the 3rd country,” Thai FDA Deputy Secretary-General Supattra Boonserm previously told CNN.

CNN’s investigation began months ago. SkyMed representatives initially told CNN they would agree to an interview but then stopped returning multiple calls and emails. The company contacted CNN after our report published wanting to tell its side of the story.

On Wednesday in a lengthy on-camera interview with CNN, SkyMed’s CEO Kampee Kampeerayannon denied his company was part of any repackaging operation occurring in the warehouse when it was raided.

“The owner of the warehouse, they just wanted to repack our brand and export it,” he said.

Kampeerayannon said if any gloves are exported from Thailand under the SkyMed brand, it is “not under our permission,” he told CNN.

The CEO said Paddy the Room was “one of hundreds” of SkyMed brokers which had permission to sell and promote SkyMed gloves, though he says the relationship ended over a year ago.

Speaking to CNN on Thursday, the Thai FDA’s Boonserm said it was possible, but unproven, that SkyMed was somehow a victim of counterfeiting.

One mystery is where SkyMed sources its gloves.

After giving CNN contradictory answers about the number of glove suppliers it has in Thailand, he ultimately said there was just one.

Kampeerayannon claimed SkyMed has filled orders for one hundred million boxes of gloves but would not say who had purchased them.

He told CNN that US musician Nikki Lund had helped finance an order for 144 billion boxes of SkyMed gloves — a claim that Lund emphatically denied to CNN as “not possible and ridiculous.”

That many gloves would be almost 40 times more gloves than the entire world produced last year.

“You would need 200 or 300 factories to pull that off,” said American PPE expert Douglas. Stein. “It’s just stupid.”