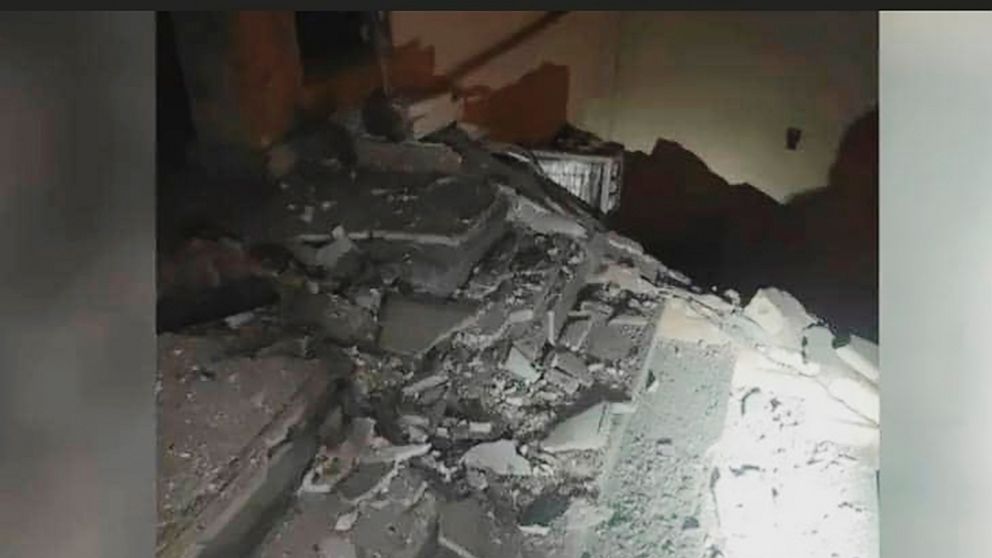 Tension rises in Iraq after failed bid to assassinate PM

BAGHDAD — The failed assassination attempt against Iraq’s prime minister at his residence on Sunday has ratcheted up tensions following last month’s parliamentary elections, in which the Iran-backed militias were the biggest losers.

Helicopters circled in the Baghdad skies throughout the day, while troops and patrols deployed around Baghdad and near the capital’s fortified Green Zone, where the overnight attack occurred.

Supporters of the Iran-backed militias held their ground in a protest camp outside the Green Zone to demand a vote recount. Leaders of the Iran-backed factions converged for the second day on a funeral tent to mourn a protester killed Friday in clashes with security. Many of the faction leaders blame the prime minister for the violence.

Prime Minister Mustafa al-Kadhimi suffered a light cut and appeared in a televised speech soon after the attack by armed drones on his residence. He appeared calm and composed, seated behind a desk in a white shirt and what appeared to be a bandage around his left wrist.

Seven of his security guards were wounded in the attack by at least two armed drones, according to two Iraqi officials. They spoke on condition of anonymity because they were not authorized to give official statements.

Secretary of State Antony Blinken talked with al-Kadhimi on Sunday to relay U.S. condemnation of the attack and to underscore that the U.S. partnership with the Iraqi government “is steadfast,” State Department spokesman Ned Price said.

A security video showed the damage to his residence: a van parked outside the residence badly mangled, a shallow crater near the stairs, cracks in the ceiling and walls of a balcony and broken parts of the building’s roof. Two unexploded rockets were filmed at the scene.

There was no claim of responsibility, but suspicion immediately fell on Iran-backed militias. They had been blamed for previous attacks on the Green Zone, which also houses foreign embassies.

The militia leaders condemned the attack, but most sought to downplay it.

It was a dramatic escalation in the already tense situation following the Oct. 10 vote and the surprising results in which Iran-backed militias lost about two-thirds of their seats.

Despite a low turnout, the results confirmed a rising wave of discontent against the militias that had been praised years before as heroes for fighting Islamic State militants.

But the militias lost popularity since 2018, when they made big election gains. Many hold them responsible for suppressing the 2019 youth-led anti-government protests, and for undermining state authority.

The attack “is to cut off the road that could lead to a second al-Kadhimi term by those who lost in the recent elections,” said Bassam al-Qizwini, a Baghdad political analyst. “They started escalating first in the street, then clashed with Iraqi Security Forces, and now this.”

On Friday, protests by supporters of the pro-Iran Shiite militias turned deadly when the demonstrators tried to enter the Green Zone where they had been camped out, demanding a recount.

Security forces used tear gas and live ammunition. There was an exchange of fire in which one protester affiliated with the militias was killed. Dozens of security forces were injured. Al-Khadimi ordered an investigation.

“The blood of martyrs is to hold you accountable,” said Qais al-Khazali, leader of the Asaib Ahl al-Haq militia, addressing al-Kadhimi in recorded comments to supporters. He blamed him for election fraud.

In the strongest criticism of the prime minister, Abu Ali al-Askari, a senior leader with one of the hardline pro-Iran militias, Kataib Hezbollah, questioned whether the assassination attempt was really al-Kadhimi’s effort to “play the role of the victim.”

“According to our confirmed information no one in Iraq has the desire to lose a drone on the residence” of al-Kadhimi, al-Askari wrote in a Twitter post. “If anyone wants to harm this Facebook creature there are many ways that are less costly and more effective to realize that.”

The escalation also reveals a level of nervousness among Iran and its allies as they realize that political results don’t always translate into control, said Joseph Bahout, a director of research at the American University of Beirut.

“This is an act depicting fear of loss of control. Al-Khadimi is being now perceived as a Trojan horse for more erosion of Iran’s grip on the country,” Bahout said.

Al-Kadhimi, 54, was Iraq’s former intelligence chief before becoming prime minister in May last year. He is considered by the militias to be close to the U.S., and has tried to balance between Iraq’s alliances with both the U.S. and Iran.

Prior to the elections, he hosted several rounds of talks between regional foes Iran and Saudi Arabia in Baghdad in a bid to ease regional tensions.

Marsin Alshamary, an Iraqi-American research fellow with the Harvard Kennedy School’s Belfer Center, said the attack resurfaced the long-term challenge of how to curb the powers of the militias without triggering a civil war.

For al-Kadhami, the stakes are now higher if he is to remain as prime minister.

“He doesn’t have a political party and so he is susceptible to direct attack with no party to negotiate or protect him,” she added.

Iraq’s election commission has yet to announce the final results. The parliament could then convene, elect a president and form a government.

The U.S., the U.N. Security Council and others have praised the election, which was mostly violence-free and without major technical glitches.

But the unsubstantiated fraud claims have cast a shadow over the vote. The standoff with the militia supporters has increased tensions among rival Shiite factions that could spill into violence and threaten Iraq’s newfound relative stability.

Influential Shiite cleric Muqtada al-Sadr, who won the largest number of parliament seats in the Oct. 10 elections, denounced the “terrorist attack,” which he said seeks to return Iraq to the lawlessness and chaos of the past. While al-Sadr maintains good relations with Iran, he publicly opposes external interference in Iraq’s affairs.

2022-11-22
Previous Post: In Indonesia, an Earthquake, Landslides and Homes ‘Flat to the Earth’
Next Post: Formula 1: Chinese GP to be cancelled because of the country’s Covid policies