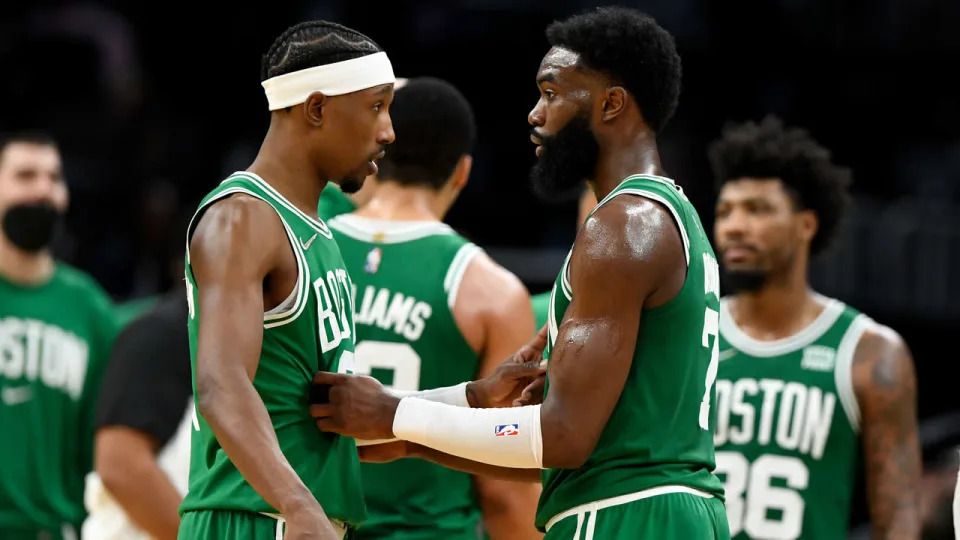 For the first time since mid-December, the Boston Celtics should have their preferred starting five on the floor when the San Antonio Spurs visit TD Garden on Wednesday evening.

Despite only eight games together this season, the combination of Marcus Smart, Jaylen Brown, Jayson Tatum, Al Horford, and Robert Williams is outscoring opponents by 20.6 points per 100 possessions, a mark that ranks fourth-best in the NBA among all five-man lineups with at least that group’s 87 minutes of floor time.

The lingering questions: Can that group maintain that production over a larger sample and would that eliminate some of Boston’s maddening inconsistencies? Maybe an even bigger question: Can that group stay healthy enough to even answer those initial queries?

While we wait for those answers, we decided to dust off the Celtics Mailbag and tackle some of your questions about these seesaw C’s. Unsurprisingly, most of the questions focused on the upcoming trade deadline and potential roster decisions ahead.

What is the most realistic trade option for the Celtics without moving Tatum, Brown, Smart or Timelord? — Jeffrey Mattson (@jmattsonjr)

Jeffrey’s question seemed like the perfect jumping off point because it underscores the predicament the Celtics find themselves in. On one hand, the numbers suggest the core of this team (and those four players in particular) has been excellent and there should be an obvious desire to keep that group together should they continue to thrive.

On the other hand, Boston is a .500 team over the past two seasons and changes to the coach, general manager and complementary pieces of the team did nothing to eliminate Boston’s infuriating inconsistencies.

So what does Brad Stevens do? Does he tinker on the edges with the goal of simply increasing flexibility and adding another impact talent this summer? Does he break off pieces of this core with the belief that a bigger move is necessary to break some of the lingering bad habits?

There are no easy answers at the moment and only a month before Stevens has to pick a path. Ideally, the core stays healthy for a couple weeks to start January and those decisions become a little easier to make.

The Celtics can generate in the neighborhood of $20 million in cap space this summer while maintaining their four-man core, but that would require getting off the final year of Horford’s deal, moving Josh Richardson, and pruning some recent draftees before it could utilize that space. The 2022 free agent class isn’t overflowing with ideal options, either. There’s a lot of hurdles to simply getting to that spot and Boston would be quite limited in filling out its future roster (though exceptions could aid that process).

Adding another impact player via trade is a less prickly route but the Celtics lack the sort of glitzy assets that might allow them to be at the front of the line for any disgruntled star. Boston either has to lean into player development in hopes that an Aaron Nesmith or Romeo Langford evolve into attractive trade chips, or Stevens has to work to restock a depleted treasure chest of draft assets.

Am I nuts to think we consider moving off Tatum? Feels like Brown plays more in the flow of the offense, and Tatum’s value would be loads higher. Could easily get another All-Star and likely more. I feel bad for even entertaining the thought! — Tom Hall (@tomhall789)

We were going to say you are indeed nuts, Tom, but …

Chris, why aren’t we talking about trading Tatum? He’s not a 1 but is your most valuable asset and can help restock the cupboard for the future. — Jim Morocco (@CoachMoroccoMHS)

Make room in the asylum! Look, we get the suggestion and we’ve said recently that nothing is off the table as the Celtics ponder the path forward. That said, Tatum is so far off the table you’d think he was levitating.

Our guess is that Tatum is the last bridge detonated if this thing doesn’t work.

In fact, it got me thinking about the order of changes before the Celtics ever elected to move on from Tatum. We figure the Celtics would trade Smart, Williams (it pains me to even type that), and Brown before even pondering a Tatum deal. They would fire Ime Udoka and Brad Stevens before exploring a Tatum deal. They would probably trade TD Garden and the Auerbach Center before exploring Tatum options.

Essentially, our guess is that Tatum is the last bridge detonated if this thing doesn’t work. And it’s far more likely that he gets to the point, further down the road, where he’s daydreaming about new scenery more than Boston desires to cash in on his value.

Who’s to blame so far in this season? The players or the coaching? — Ricky Rodriguez (@Ricarius)

Every level of the organization deserves some blame for the Celtics’ underachieving ways.

Stevens started the process of creating the flexibility that may soon deliver another impact talent but did not accumulate enough shooting last summer to accentuate the current core. Udoka is adjusting to life as a head coach and hasn’t always been able to press the right buttons, though recent history suggests that might be more on the players than the coach.
Forsberg: Celtics should embrace Jaylen Brown’s new mantra

Boston’s bench has struggled with consistency and that can’t all be blamed on COVID. As glossy as the numbers are for the core of this team, their late-game struggles and inability to put together 48 minutes of consistent effort is a monster reason for the team’s sub-.500 record.

We’ve long quibbled with the way Boston coaches have struggled to prioritize player development — at least via in-game reps — over the past few seasons. We can’t sit here and lament missed opportunities (Desmond Bane! Saddiq Bey!) when we can’t help but wonder if Langford and Nesmith would be further along if they had been put into those other situations (conversely, Bane and Bey could be wasting away on the bench here if picks were altered).

All that said, Grant Williams has blossomed enough this year that we’re left wondering if he deserves starter consideration. Horford has been excellent but his shot has been off and Williams could provide spacing that the first unit needs to fully thrive. Is Grant Williams the long-term answer at the four? We think there could be other stretch four options that might be even better depending on how Boston splurges on its next impact talent. But Grant Williams can help this team in any variety of roles.

Langford will earn $5.6 million next season and needs to be more available to command that price tag. Nesmith and Pritchard are important to whatever is next because they’re on favorable rookie pacts but they could also just as likely be trade fodder in any big-splash move.

We’re left yearning for Udoka to carve out consistent time for that Langford/Pritchard/Nesmith trio regardless of how this season unfolds. That’s no easy chore when healthy and trying to win. But moving out Dennis Schroder before the deadline could open time and the younger players need to force the issue with their performance when they do get opportunities.

How long are we going to continue to give excuse after excuse for this mediocre team with the same problems year after year? — christine SS (@ccsilva32)

This is a harsh but fair query. A lot of Boston’s problems are not exclusive to the 2021-22 campaign, especially the team’s issues with consistency. The Celtics changed the coach, general manager, and the complementary pieces over the summer and it wasn’t enough to stop their roller coaster ways. So it does make you wonder if tinkering on the fringes is enough to get this team back to being a legitimate contender.

That’s why the next couple weeks feel so important. There is an absolute danger in putting too much stock in a small sample, especially considering the upcoming level of competition. But the eyeball test should matter more than wins and losses. Do the Celtics play to a level that truly inspires confidence about where this team can be in four months? Or is it clear something more drastic needs to change?

2022-01-05
Previous Post: Macron says he wants to ‘piss off’ the unvaccinated
Next Post: KFC to launch plant-based fried chicken made with Beyond Meat nationwide