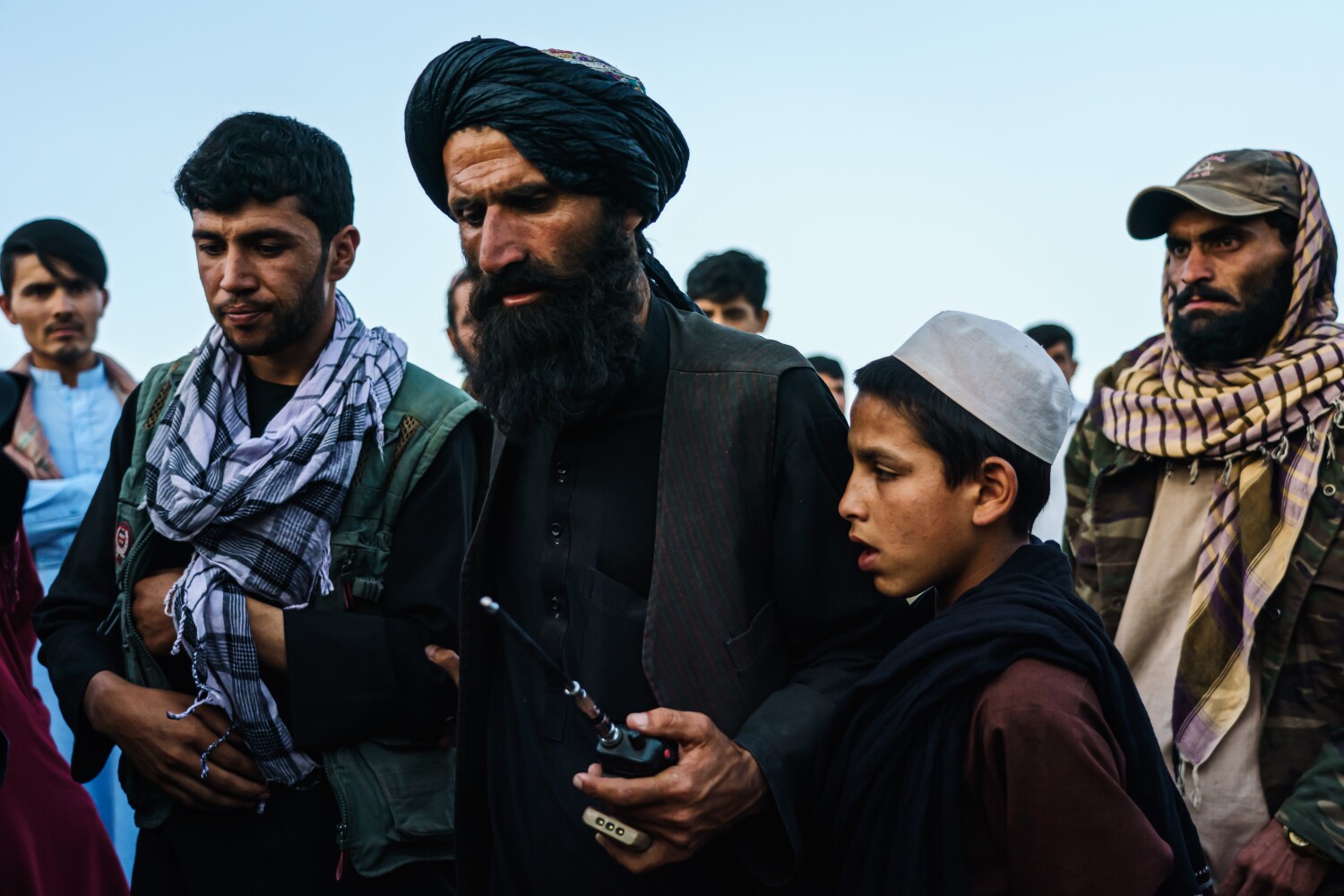 The Taliban, seeking to dispel fears of a return to the group’s repressive rule of two decades ago, promised Tuesday to respect the rights of Afghan women and refrain from seeking vengeance against former foes.

But tens of thousands of compatriots, some enduring bloody beatings at the hands of Taliban fighters, pressed ahead with a desperate quest for places on a now-restarted U.S. airlift ferrying American citizens and Afghan allies out of the country.

The militant movement’s top leader, Mullah Abdul Ghani Baradar, made a triumphal return to Kandahar, the birthplace of the Taliban, amid growing signs that the group — which routed government forces across Afghanistan in little more than a week — was making preparations to formalize a new government.

Two days after its fighters swept into the capital, Kabul, the Taliban issued a series of conciliatory declarations and statements, even holding the first news conference by its main spokesman, seemingly seeking to present a more moderate face to the world.

Its promises drew a skeptical reaction from many inside and outside the country who were mindful of the medieval cruelty and subjugation of women that marked the Taliban rule a generation ago.

Still, there were signs that the United States — which led a vast two-decade military mission that propped up successive pro-Western governments after the Taliban was toppled in 2001 — was willing to deal with the group on at least a limited practical level.

The Pentagon said U.S. military officials at the Kabul airport, the last patch of American-held territory in the country, were in communication with local Taliban commanders in the capital to avert any conflict at the airport, as arriving U.S. forces worked to speed up the airlift of Americans and Afghan allies.

A day earlier, that evacuation was suspended for hours after Afghans thronged the tarmac, with some clinging to the fuselage of a U.S. transport plane as it took flight — indelible images of despair and chaos that were beamed around the world.

A hail of criticism over the plight of Afghans who assisted the U.S. military or worked for American media or civil society organizations has put the Biden administration on the defensive. State Department spokesman Ned Price said U.S. forces and officials were “working around the clock” to transport Americans, Afghans with special visas and other vulnerable Afghans out of the country.

The U.S. securing of the airport, however, appeared to have changed the venue for turmoil and unrest. Outside its gates, where hundreds of Afghans were held back in a barbed-wire enclosure, Taliban fighters lashed out at those trying to make their way to the terminal.

As the scorching afternoon sun beat down and a dust storm approached, the militants struck people with sticks, rubber hoses and knotted ropes. About a dozen were wounded, including a woman and child who were left covered in blood. Those around them — men, women and children alike — screamed and cried.

At the Pentagon, Army Maj. Gen. William Taylor said the airlift resumed overnight, with nine Air Force C-17 transport planes arriving with about 1,000 U.S. military personnel aboard. Seven C-17s left with between 700 and 800 civilians, 165 of them Americans and the rest Afghans and third-party nationals, he said.

Taylor said that by Wednesday, the military hoped to be flying out one plane an hour, with the eventual aim of getting up to 9,000 people per day onto departing flights. But the planned end of the U.S. military presence is just two weeks away, and the Biden administration has not signaled any change in the timetable.

Despite the momentous events of recent days, there has been no formal transfer of power in this country of 38 million people. But an ad hoc group of Afghan figures has been discussing the transition in Kabul with Taliban representatives, and Baradar’s arrival in Kandahar was seen as a possible prelude to an announcement soon.

In the capital, the group’s main spokesman, Zabihullah Mujahid — long the voice of the Taliban on social media, often thought to be a composite rather than an individual — said at a news conference that under the new order, women’s rights would be respected, but within the parameters of sharia, or Islamic law.

Women, he said, would be able to work and pursue their education and “be very active in society, but within the framework of Islam.”

That echoed a statement earlier on state television by an official in the Taliban’s cultural commission, Enamullah Samangani, who declared that the Islamic Emirate of Afghanistan — the Taliban’s name for the country — “doesn’t want women to be victims.”

The promise to allow women to participate in society was already being put to the test Tuesday as women journalists with the Afghan Tolo news network continued to appear on television. One female presenter even engaged in a debate with a Taliban official — a scene that would have been unfathomable in the previous era of Taliban rule between 1996 and 2001.

On the streets of the capital, women were still out in public, only some of them wearing the burqa, the full body covering the Taliban had made compulsory for women during its previous rule.

In their appearances Tuesday, both Samangani and Mujahid also promised that former government officials, as well as people who worked with foreign militaries and nongovernmental organizations, would not be harmed. “We don’t want any internal or external enemies,” Mujahid said.

International officials said it remained to be seen whether the Taliban was really prepared to move away from the harsh practices for which it was notorious during its prior incarnation as Afghanistan’s ruling power.

“Understandably, given their past history, these declarations have been greeted with some skepticism,” United Nations human rights office spokesman Rupert Colville said in Geneva. “Nevertheless, the promises have been made, and whether or not they are honored or broken will be closely scrutinized.”

Price, the State Department spokesman, indicated that any future relationship with the Taliban would be “predicated on deeds.”

“Words can reassure,” he said. “But we will be looking for the follow-through.”

Many Afghans, fearing the worst, are still intent on trying to exit the country, a process still fraught with difficulty and danger. Taliban guards roamed the street outside the airport gate, some firing automatic weapons into the air to disperse the crowds.

Inside the airport, a semblance of order had been restored, with troops from the U.S. Army’s 82nd Airborne deployed to clear the tarmac of people. But commercial flights to and from Kabul remained suspended until further notice, even though military flights were arriving and departing.

In the capital’s Shar-e-Naw district, shops, bakeries and a few restaurants were open, though more upscale establishments and a shoe store remained closed. Foot traffic was lighter than usual, with many Afghans hunkering down in their homes to gauge the new situation.

In a sign of at least temporary continuity, some officials, including Kabul’s mayor and the acting national health minister, remained in their posts and resumed work Tuesday.

The Taliban is “not in a hurry to replace everybody,” said one advisor to former Afghan President Ashraf Ghani, who asked to not be identified to avoid any reprisals. Ghani fled the country as the Taliban advanced to the capital.

“Once you get into these technical matters — projects, construction, dams, roads, the civil service — it’s a more complicated system and operation than they have ever been involved in,” the advisor said, “and they’ll be held accountable and will have scrutiny.”