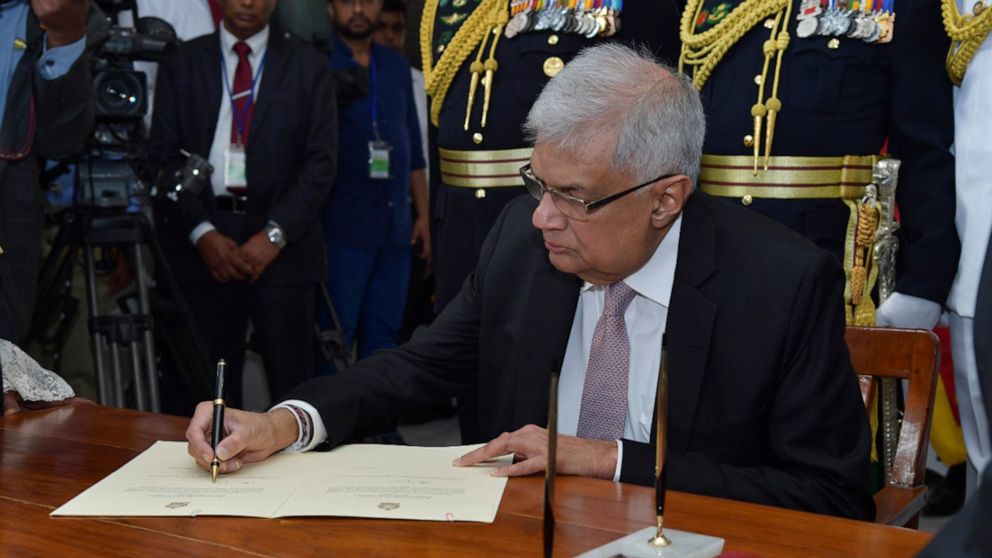 COLOMBO, Sri Lanka — Veteran politician Ranil Wickremesinghe was sworn in as Sri Lanka’s new president Thursday to take charge of a nation bitterly angry that he will remain in power amid an unprecedented economic crisis.

Sri Lankans have taken to the streets for months to demand their top leaders step down to take responsibility for economic chaos that has left the nation’s 22 million people struggling with shortages of essentials, including medicine, fuel and food. While the protesters have focused on the Rajapaksa political dynasty, Wickremesinghe has also drawn their ire as a perceived Rajapaksa surrogate.

The six-time prime minister has never held the top job. But he easily won the secret ballot of lawmakers Wednesday to finish the term of former President Gotabaya Rajapaksa, who fled the country after protesters stormed his residence last week and resigned.

His appointment received mixed reactions, with some supporters lighting firecrackers while protesters continued to demand that he resign.

Wickremesinghe, 73, has wide experience in diplomatic and international affairs and has been overseeing bailout talks with the International Monetary Fund. He won the support of 134 members in the 225-member Parliament.

Lawmakers apparently considered him the safer hands to lead the nation through the crisis, despite public anger at Wickremesinghe as an example of the nation’s problematic political establishment. During demonstrations last week, crowds set his personal residence on fire and occupied his office.

After Wednesday’s vote, Wickremesinghe called for politicians to work together and pleaded for the country to move on. But protesters flocked to the presidential office instead, chanting, “Ranil, go home!”

Protest leaders told reporters Wednesday that they don’t accept Wickremesinghe’s appointment and urged him to step down immediately.

Parliament’s selection goes against the “will of the people,” said Jeewantha Peiris, a protest leader and Catholic priest, adding that demonstrations against Wickremesinghe would continue.

“We are the people who sent Gotabaya home, and it’s not a difficult task for us to send you (Wickremesinghe) home,” said Tampitiye Sugathananda, a Buddhist monk and protest leader who was outside the presidential office.

Late Thursday, police and Sri Lankan soldiers dismantled structures near the protest site where demonstrators have gathered for the past 104 days.

A large number of army and police personnel arrived in trucks and buses around midnight, removing tents and arresting some protesters. They blocked off roads leading to the site and carried long poles. Protesters said on social media that they were beaten up, but the allegations could not be independently verified.

Wickremesinghe took his oath as the country’s eighth executive president Thursday morning at a ceremony held in Parliament in the capital, Colombo. He now can choose a new prime minister.

In an example of the troubles caused by the economic crisis, a power outage hampered live coverage of the swearing-in ceremony.

In some areas, Wickremesinghe’s supporters lit firecrackers and distributed sweets to celebrate his appointment as president, local media reported.

The U.S. ambassador to Sri Lanka, Julie Chung, wrote on Twitter that she looks forward to working with Wickremesinghe. She added: “In these challenging times, it will be essential for all parties to redouble efforts to work together to tackle the economic crisis, uphold democracy & accountability, and build a stable & secure future for all Sri Lankans.”

Wickremesinghe said Monday that the negotiations with the IMF were near a conclusion and talks on help from other countries had also progressed. He also said the government has taken steps to resolve shortages of fuel and cooking gas.

On Monday, in his role as acting president, Wickremesinghe declared a state of emergency that gave him broad authority to act in the interest of public security and order. Authorities can carry out searches and detain people, and Wickremesinghe can also change or suspend any law. Parliament can regularly review the law and it will expire without its approval.

Presidents in Sri Lanka are normally elected by the public. The responsibility falls to Parliament only if the presidency becomes vacant before the term officially ends. It has happened once before, in 1993, when then-Prime Minister Dingiri Banda Wijetunga was chosen by Parliament uncontested after former President Ranasinghe Premadasa, father of the current opposition leader, was assassinated.