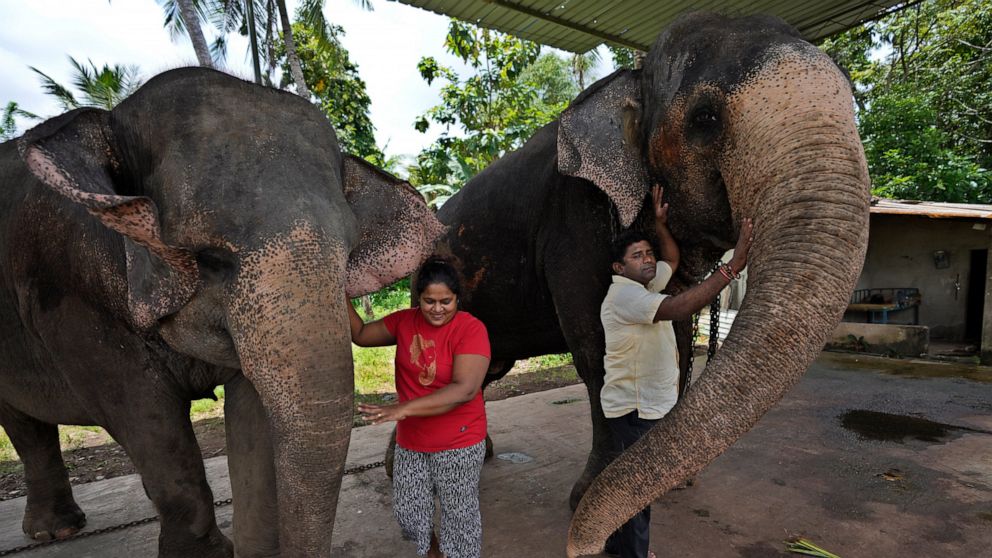 COLOMBO, Sri Lanka — Environmentalists in Sri Lanka are challenging a court order issued earlier this month that would allow the return of 14 illegally captured wild elephants to people accused of buying them from traffickers.

Rights groups and lawyers say the Sept. 6 court order is based on a government decree that violates Sri Lankan environmental laws. They fear the order could encourage a resurgence of trafficking of wild elephants, putting them at risk.

A motion filed by lawyer Ravindranath Dabare to reverse the court order is to be heard on Thursday.

Elephants are revered because they have been an essential part of religious and cultural festivals in Sri Lanka for many centuries. They are especially sacred for Buddhists, who account for 70% of the country’s 22 million people, because they are believed to be servants of Buddha and a previous incarnation of Buddha himself.

An elephant in the backyard has also long been a sign of wealth, power and privilege. Though capturing wild elephants has been banned for decades, government records indicate there are 219 elephants in captivity — 132 held by private owners and the rest under the care of the government.

The illegal capture of baby elephants dates to at least 2007. But things boiled over in 2015, when wildlife officials seized 38 baby elephants that were allegedly caught in the wild and sold to affluent people, including a Buddhist monk and a judge.

Six years later, the issue is back in the news after a court in Colombo ordered the return of 14 of the elephants to their alleged owners. The order is based on a government decree in August that provides guidelines on how to register elephants as pets, deploy them for work and religious festivals, and provide food and safety for the animals. Activists fear it threatens the elephants’ well-being, and experts have said the decree weakens legal recourse in the event of animal abuse.

The court ruling last week came after lawyer Ajith Pathirana, who represented the elephant owners, requested the court to release them. He said the government — through the decree — allows the owners to register their animals within three months.

Rukshan Jayawardene, a conservationist, said the order will lead to a revival of trafficking. “Elephants are going to be captured again, the same way they were captured previously,” he said.

Environment activist Sajeewa Chamikara said the decree came on the heels of years of pressure on the government by elephant owners to implement a method to register the animals that were captured illegally.

Under the previous regulations, owners had to submit the pedigree of the elephant in order to register it with the wildlife department, said Chamikara. But the new regulations bypass this, allowing owners to register elephants without proof of pedigree, which will allow them to give legal status even to those that may have been captured illegally, he added.

Authorities have rejected the criticism, saying the regulations follow the law.

“If anyone thinks these (the court order and decree) are illegal, they can go to higher courts. If it’s illegal, they must prove it,” State Minister of Wildlife Protection Wimalaweera Dissanayake said.

Out of the 38 elephants, the court has ordered the release of 14 to their alleged owners. Another 21 are in state custody because their supposed owners are in the middle of legal proceedings after being accused of submitting false permits to prove ownership. Two elephants were released previously and one died earlier.

According to the wildlife department, some owners paid as much as $200,000 for captured animals.

One alleged owner, Niraj Roshan Samarakkody, was accused of elephant smuggling and kidnapping and was detained for months over allegations related to permits before being released on bail. He denies the accusations. Officials seized five elephants from him during the larger crackdown in 2015.

In an interview, Samarakkody welcomed the August decree, calling it a “positive move” that would return elephants to their owners. The five elephants are yet to be released to him.

Critics of the decree say they will continue their fight. “We are now preparing to go before the highest courts,” said Dabare, the lawyer.

Elephants are considered endangered in Sri Lanka, with experts saying they are extremely vulnerable to habitat loss and degradation. In the 19th century, Sri Lanka is believed to have been home to up to 14,000 elephants. In 2011, the country’s first elephant census found the population to be about 6,000.