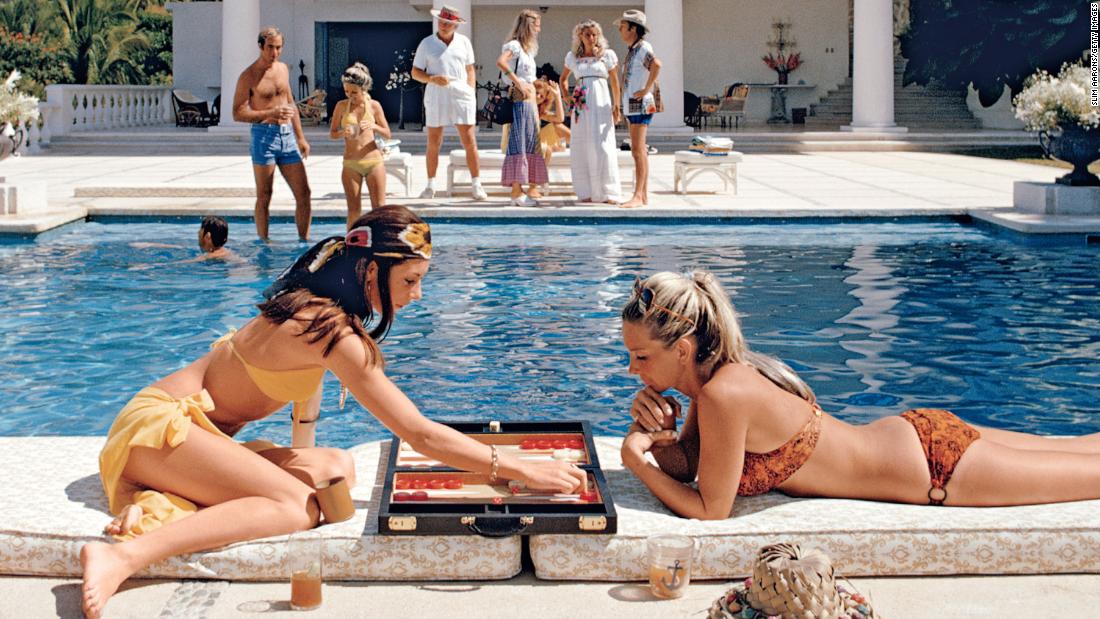 Slim Aarons, the photographer who captured high society at play

Slim Aarons built a career documenting the lives of the rich and beautiful.

Working for publications like Town & Country, Harper’s Bazaar and Life magazine, the late photographer spent five decades taking unapologetically glamorous pictures of aristocrats and socialites. Whether lounging in Italian villas, boating off the coast of Monaco or foxhunting in the English countryside, his globetrotting subjects epitomized high society — and old money.

But according to the author of a new book on Aarons’ work, the photographer’s motive was neither to celebrate nor critique the opulence he encountered. He was driven by a journalistic curiosity about how the world’s most privileged people lived, said Shawn Waldron, who co-wrote “Slim Aarons: Style.”

“He was a reporter,” Waldron said over the phone from New York. “You have to think that so many of these pictures are created on assignment. He was sent somewhere to record what was happening at that particular place.”

The photo agency Getty Images acquired Aarons’ entire archive in 1997, several years after his retirement. Waldron, who also works as a Getty curator, said that only 6,000 of the approximately 750,000 images have been digitized so far.

At the time of the purchase, Aarons was “sort of forgotten about” and “a little bit out of favor,” Waldron added. But now, some 15 years after his death, experts and audiences are revisiting and reinterpreting the photographer’s vast body of work. With social media giving today’s jet-setters close control over how their private lives are depicted, his oeuvre offers a refreshingly candid glimpse into a past era.

And while Aarons moved with ease through the society’s most exclusive circles, he retained his objectivity and remained “very grounded,” Waldron said.

“He obviously became close to some of these people,” he added. “He photographed subjects as they came up through society and then photographed their children decades later. These are long-term relationships… but he was also very (much) of a fly on the wall and always kept that professional distance.

“He was constantly going from place to place, but he always came home to his little farmhouse in Westchester County, New York.”

Aarons may have spent half a century surrounded by affluence, but his fixation on glamour may have been rooted in experiences of poverty and war.

Though the photographer always claimed to be an orphan from New Hampshire, a documentary produced after his death revealed that he hailed from an immigrant Jewish family in New York City’s Lower East Side. With an absent father and his mother in a psychiatric hospital, Aarons was “passed between family members,” Waldron said.

Still using his birth name George Allen Aarons, rather than his later moniker Slim, he escaped poverty by joining the army as a photographer in his early 20s. Serving during World War II, he honed his craft not at polo matches or pool parties, but in military maneuvers including the Allies’ ill-fated assaults against Italy in the Battle of Monte Cassino. The photographer later “made light” of his experiences, but they stayed with him, Waldron said.

“A lot of people who were photographers in the war, either army photographers or war correspondents … just kind of stuck with it. And Slim said, ‘No, I’ve seen enough,'” Waldron said, referencing Aarons’ famous response to the suggestion he might also document the Korean War. (“I’ll only do a beach if it has a blonde on it,” the photographer reportedly said.)

Kleenex heir Jim Kimberly (far left, in orange) talks with friends on the shores of Lake Worth, Florida in 1968. Credit: Slim Aarons/Getty Images

Waldron’s new title is the latest in a series of thematic books on the photographer, published in recent years. Focusing on the photographer’s interactions with the fashion world, its 180 photographs feature a host of style icons, including Gianni Versace on Lake Como and model Veruschka von Lehndorff doing the limbo in Acapulco.

The photos also chart luxury fashion’s evolution through the decades, from the formality of the postwar years to 1990s patterned ski jackets. But while Aarons did some conventional fashion shoots in his early career, he eschewed the genre’s norms. Never using a stylist, and often carrying little more than a camera and a tripod, he did not identify with the fantasy attached to fashion photography, Waldron said.

“Fashion photography is about creating a story and a typology and acting it out … but Slim didn’t want to do that,” Waldron said. “He was interested in the real person — not only what they were wearing, but what they were driving, where they’d go to dinner afterward. It’s about all the different parts that make personal style. That’s what he really connected with.”

Herein lies what Waldron described as the difference between fashion and style — between the transient and the timeless. Indeed, Aarons appeared unconcerned about his subjects’ wardrobes or the trends of the day.

“I didn’t do fashion,” the photographer once said. “I did the people in their clothes that became the fashion.”