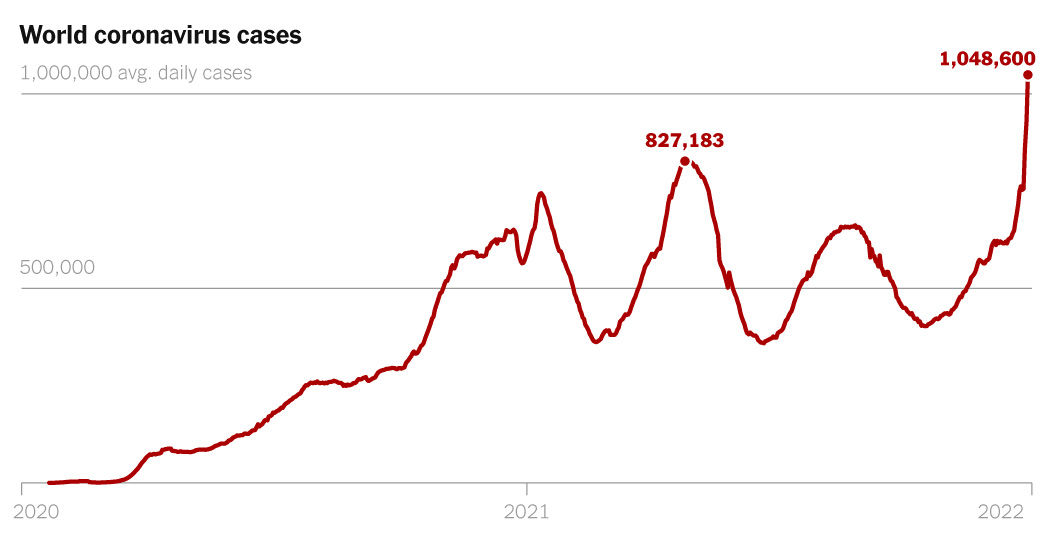 As the Omicron variant sweeps across the planet, the global tally of new coronavirus cases has for the first time passed one million per day on average. The previous global case record set last April has already been broken three times this week.

The United States, Canada and much of Western Europe are leading the surge, with both regions seeing record-breaking levels of new coronavirus cases. The daily average number of new cases in the United States on Tuesday was more than 267,000, exceeding the previous all-time peak set in January; Wednesday’s average was higher still, at more than 300,000.

As dramatic as these case counts are, they are also likely an undercount because of asymptomatic cases, reporting lags due to the holiday season, lack of test availability in many places and at-home tests whose results may not be reported.

In the United States, where Omicron is spreading quickly, 16 states and Puerto Rico are at their all-time case records. These include states with comparatively high vaccination rates: Maryland, Massachusetts, New Jersey, New York and Rhode Island, all of which are at least 70 percent fully vaccinated. In addition to being more transmissible generally, Omicron also appears to give rise to more breakthrough infections.

Similarly, some of the European countries currently facing serious surges have among the world’s highest vaccination rates. In Portugal, where 88 percent of the population is fully vaccinated, cases are up more than 200 percent in the past two weeks. Spain, where new cases have more than quintupled in the past three weeks, is 80 percent fully vaccinated.

So far, overall hospitalization and death rates have not come close to reaching previous peak levels, though some places are struggling. About 78,000 people in the United States are hospitalized with the virus, compared with over 130,000 at the height of last winter’s peak. The average daily rate of deaths across much of the world also remains lower than the record rates seen earlier in the pandemic.

A combination of immunity from vaccines, booster shots and previous infections is most likely at least partially responsible for lower hospitalization and mortality. Encouraging early data also suggests the Omicron variant may be less virulent than previous strains of the virus.

The recent surges in all these places, however, have been fast and steep, and severe outcomes usually lag case spikes by at least a few weeks, so hospitalizations and death rates may rise in the coming days.

“This is and will continue to put immense pressure on exhausted health workers and health systems on the brink of collapse and again disrupting lives and livelihoods,” Dr. Tedros Adhanom Ghebreyesus, the director general of the World Health Organization, said at a news conference on Wednesday.

Case rates in South America, Asia and much of Africa have so far remained relatively low. And at least some countries that saw record case loads this month may be turning a corner. In southern Africa, where scientists first reported the Omicron variant to the World Health Organization, cases remain higher than on the rest of the continent but appear to be abating.

On Wednesday, U.S. health officials continued to stress the importance of vaccination and booster doses. In a White House news briefing, Dr. Rochelle Walensky, the director of the Centers for Disease Control and Prevention, said that people eligible for a booster shot who have not yet gotten one “do have some protection against severe disease and death,” though she added that “they do have quite a bit of waning with regard to protection against infection.”

That group with waning immunity comprises those who completed a Moderna or Pfizer two-dose series six months ago or more, or received a Johnson & Johnson shot at least two months ago.

Although Dr. Anthony Fauci, the top infectious disease expert in the United States, discouraged large New Year’s Eve parties, his advice in the news conference Wednesday was more measured when it came to small gatherings of vaccinated people.

“Although the risk is never zero in anything, the risk is low enough that we feel you should continue to go through with those plans of having a home-related, vaccinated, boosted gathering with family and close friends who are also vaccinated and boosted,” he said.