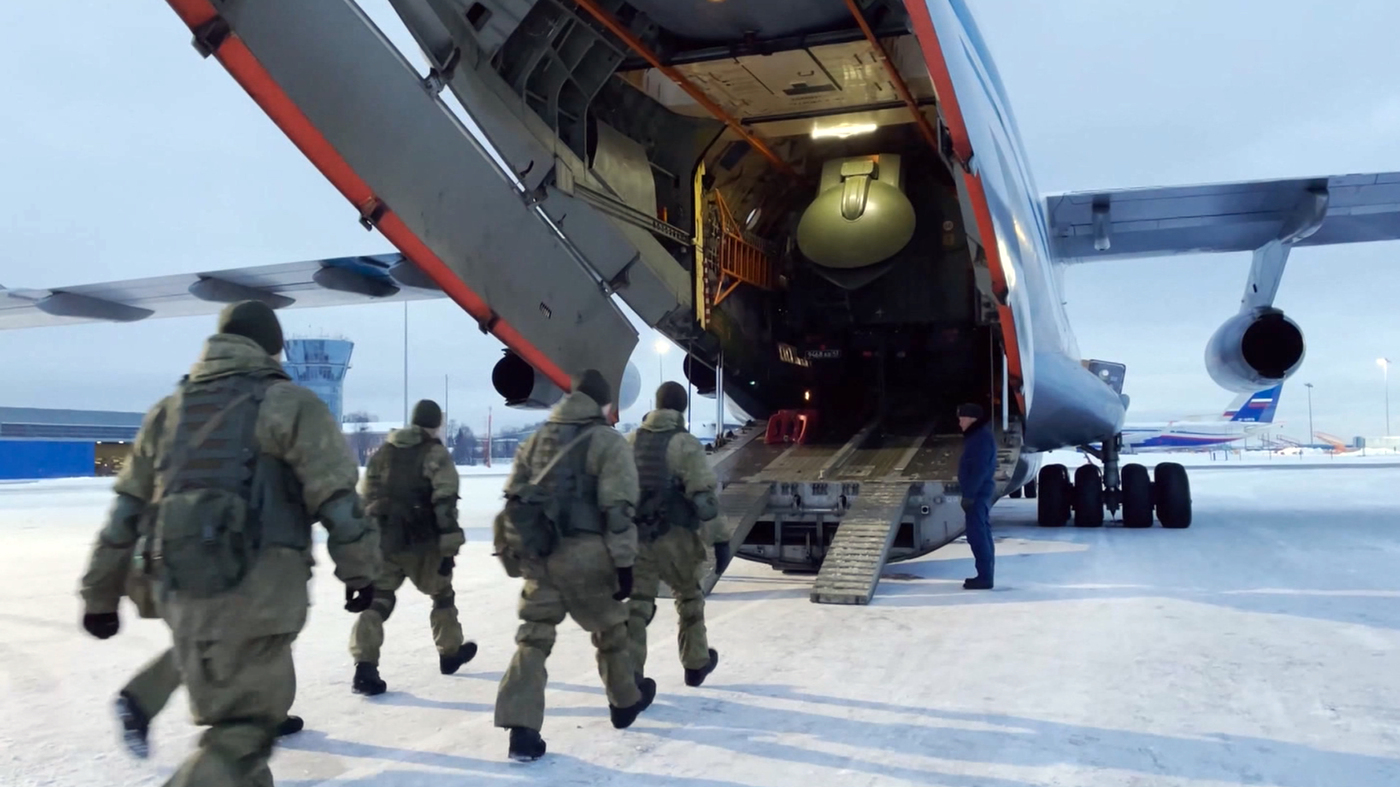 In this photo taken from video released by the Russian Defense Ministry Press Service, Russian peacekeepers board on a Russian military plane at an airfield outside Moscow, in Russia to fly to Kazakhstan Thursday. A Russia-led military alliance, the Collective Security Treaty Organization, said early Thursday that it would send peacekeeper troops to Kazakhstan.

In this photo taken from video released by the Russian Defense Ministry Press Service, Russian peacekeepers board on a Russian military plane at an airfield outside Moscow, in Russia to fly to Kazakhstan Thursday. A Russia-led military alliance, the Collective Security Treaty Organization, said early Thursday that it would send peacekeeper troops to Kazakhstan.

Russia-led alliance troops arrived in Kazakhstan on Thursday after increasingly chaotic and violent protests rocked the nation for days and resulted in dozens of people killed and hundreds injured, according to authorities.

The troops were deployed as part of a “peace-keeping” force from the Collective Security Treaty Organization, a Russia-led Eurasian military alliance akin to NATO. The CSTO, composed of Russia, Armenia, Belarus, Kazakhstan, Kyrgyzstan and Tajikstan, announced early Thursday that units had arrived and would be conducting operations “stabilizing” the country and protecting “important state and military facilities.”

Kazakhstan’s president Kassym-Jomart Tokayev requested CSTO’s assistance late Wednesday evening, describing protesters as “a band of international terrorists.” Nikol Pashinyan, the Prime Minister of Armenia and the chairman of CSTO’s Security Council, announced later that evening that the organization had accepted Tokayev’s request and that forces would intervene “for a limited period of time.” Pashinyan echoed Tokayev’s rhetoric characterizing protests “as a result of external intervention.”

The CSTO has not said how many troops are or will be in Kazakhstan.

The current protests began Sunday in Western Kazakhstan after the government removed a price cap on liquefied petroleum gas (LPG) – the primary fuel used for vehicles in the country — causing prices to immediately double. On Tuesday, Tokayev announced that the government would institute a new price cap for 180 days, rolling back LPG prices to the 2021 level, but by then protests had spread across the country.

Clashes between protestors and Kazakh authorities broke out across the country throughout the week, with numerous protests escalating in Almaty, Kazakhstan’s largest city. On Wednesday, demonstrators attempted to take over government buildings, police headquarters, and district police offices in Almaty, and set fire to the prosecutor’s and mayor’s offices there, The New York Times reported. Demonstrators briefly took control of the airport in Almaty, though officials and Russian news agencies have said it has since been cleared.

Police spokeswoman Saltanat Azirbek said “dozens of attackers were liquidated” in clashes with police, during an interview on state news channel Khabar-24.

Almaty police said 353 police and security personnel were injured in clashes and 12 killed.

“It is an undermining of the integrity of the state and most importantly it is an attack on our citizens who are asking me… to help them urgently,” Tokayev said in a televised address Wednesday night.

“Almaty was attacked, destroyed, vandalised, the residents of Almaty became victims of attacks by terrorists, bandits. Therefore it is our duty… to take all possible actions to protect our state.”

However, by late Wednesday, with protests escalating, the government announced a national state of emergency until Jan. 19, with an overnight curfew. The internet was subsequently shut down nationwide, according to Netblocks, a watchdog organization that monitors internet freedom.

While the protests were sparked by fuel prices, many activists and protestors have said the discontent runs much deeper, citing economic precarity, the pandemic, and a lack of democratic outlets for redress.

Mukhtar Umbetov, a rights activist, told the Times that the government “has removed all legal ways to participate in politics” and that people lack representation to solve problems.

Much ire has been directed towards Nazarbayev, who despite stepping down in 2019 still wields considerable influence in Kazakhstan. Videos posted to social media depicted protestors tearing down a statue of Nazarbayev while shouting “Old man, leave!”

“Nazarbayev and his family have monopolised all sectors, from banking to roads to gas. These protests are about corruption,” Zauresh Shekenova, a 55-year-old protestor in southeast Kazakhstan, told The Guardian.

“It all started with the increase in gas prices but the real cause of the protests is poor living conditions of people, high prices, joblessness, corruption.”