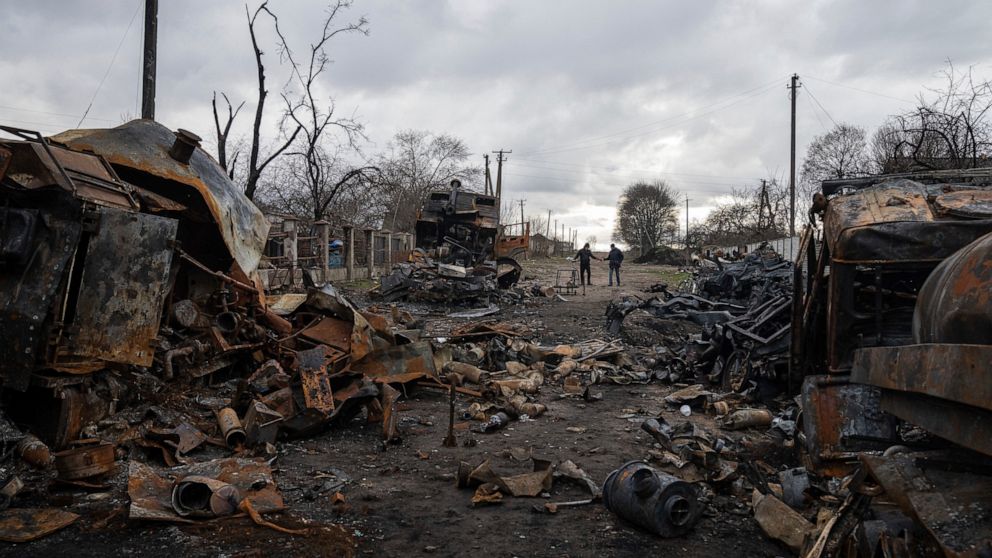 LVIV, Ukraine — Russian forces launched missile attacks on the western city of Lviv and pounded a multitude of other targets across Ukraine on Monday in what appeared to be an intensified bid to grind down the country’s defenses ahead of an all-out assault on the east.

At least seven people were reported killed in Lviv, where plumes of black smoke rose over a city that has seen only sporadic attacks during almost two months of war and has become a haven for civilians fleeing the fighting elsewhere. To the Kremlin’s increasing anger, Lviv has also become a major conduit for NATO-supplied weapons and foreign fighters joining the Ukrainian cause.

In other developments, a few thousand Ukrainian troops, by Russia’s estimate, remained holed up at a mammoth steel mill in Mariupol, the last known pocket of resistance in the devastated southern port city after seven weeks of bombardment. The holdouts ignored a surrender ultimatum from the Russians on Sunday.

And Ukrainian President Volodymyr Zelenskyy submitted a filled-out questionnaire in the first step toward obtaining accelerated membership in the European Union — a desire that has been a source of irritation to Russia for years. Zelenskyy, though, has offered to drop any effort to join NATO, one of the Kremlin’s key demands.

The Russian missile strikes on Lviv hit three military infrastructure facilities and an auto mechanic shop, according to the region’s governor, Maksym Kozytskyy. He said the wounded included a child.

Lviv, the biggest city and a major transportation hub in western Ukraine, is about 80 kilometers (50 miles) from Poland, a NATO member.

Russia has strongly complained about the increasing flow of Western weapons to Ukraine. On Russian state media, some anchors have charged that the supplies amount to direct Western engagement in the fight against Russia.

Lviv has also been seen as a relatively safe place for the elderly, mothers and children trying to escape the war. A hotel sheltering Ukrainians who had fled fighting in other parts of the country was among the buildings badly damaged, Mayor Andriy Sadovyi said.

“The nightmare of war has caught up with us even in Lviv,” said Lyudmila Turchak, who fled with two children from the eastern city of Kharkiv. “There is no longer anywhere in Ukraine where we can feel safe.”

A powerful explosion also rocked Vasylkiv, a town south of the capital of Kyiv that is home to a military air base, according to residents. It was not immediately clear what was hit.

Kharkiv, Ukraine’s second-largest city, was hit by shelling that killed at least three people, according to Associated Press journalists on the scene. One of the dead was a woman who appeared to be going out to collect water in the rain. She was found lying with a water canister and an umbrella by her side.

Military analysts say Russia is increasing its strikes on weapons factories, railways and other infrastructure targets across Ukraine to wear down the country’s ability to resist a major ground offensive in the Donbas, Ukraine’s mostly Russian-speaking eastern industrial heartland.

The Russian military said its missiles struck more than 20 military targets in eastern and central Ukraine in the past day, including ammunition depots, command headquarters and groups of troops and vehicles.

It also reported that its artillery hit an additional 315 Ukrainian targets and that warplanes conducted 108 strikes on Ukrainian troops and military equipment. The claims could not be independently verified.

Gen. Richard Dannatt, a former head of the British Army, told Sky News that Russia is waging a “softening-up” campaign ahead of the offensive in the Donbas, whose capture has become the Kremlin’s main goal since its attempt to storm Kyiv failed.

“We are doing everything to ensure the defense” of eastern Ukraine, Zelenskyy said in his nightly address to the nation on Sunday.

Ukraine halted civilian evacuations for a second day on Monday, saying Russian forces were shelling and blocking the humanitarian corridors.

Deputy Prime Minister Iryna Vereshchuk said Ukraine had been negotiating safe passage from cities and towns in eastern and southeastern Ukraine, including Mariupol and other areas in the Donbas. The government of the Luhansk region in the Donbas said four civilians trying to flee were shot and killed by Russian forces.

Vereshchuk warned Russia on social media: “Your refusal to open these humanitarian corridors will in the future be a reason to prosecute all involved for war crimes.”

The Russians, in turn, accused “neo-Nazi nationalists” in Mariupol of hampering the evacuation.

The capture of Mariupol, where Ukrainians estimate 21,000 people have been killed, is seen as a key step in preparations for any eastern assault since it would free Russian troops up for that new campaign.

A pro-Russian Ukrainian politician who was arrested last week on a treason charge appeared in a video offering himself in exchange for the evacuation of Mariupol’s trapped defenders and civilians. Ukraine’s state security services posted the video of Viktor Medvedchuk, the former leader of a pro-Russian opposition party with personal ties to Russian President Vladimir Putin.

It was not clear whether Medvedchuk was speaking under duress.

Putin, meanwhile, repeated his insistence that the Western sanctions “blitz” against Russia has failed.

He said the West has not managed to “provoke panic in the markets, the collapse of the banking system and shortages in stores,” though he acknowledged a sharp increase in consumer prices in Russia, saying they rose 17.5%.

This story has been updated to correct the attribution on the first partial quote about fighting to the end to Ukraine’s prime minister, not president.

Associated Press journalists Nico Maounis and Philip Crowther in Lviv, Ukraine, and Adam Schreck in Vasylkiv, Ukraine, contributed to this report, as did other AP staff members around the world.