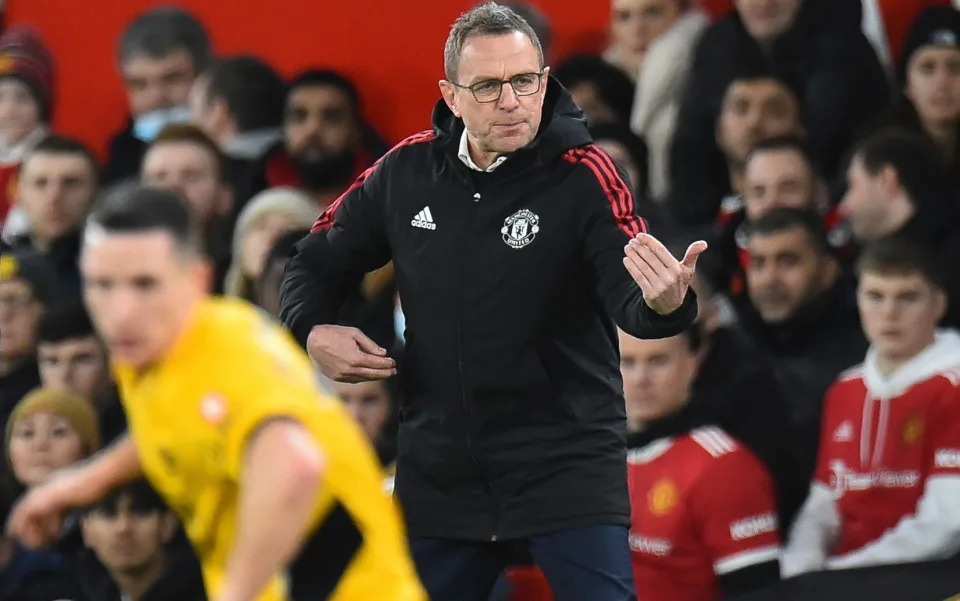 Ralf Rangnick’s tactical revolution is not working at Manchester United – this is why, News Soccer – Maxi News Today

Ralf Rangnick’s strong tactical ideology makes him different to the archetypal interim manager but Manchester United are struggling to grasp and execute his concepts after five attempts in the Premier League.

United have won a reasonable tally of 10 points from these games, but suffered a first defeat under Rangnick at home to Wolves on Monday after riding their luck to win and draw at relegation candidates Norwich and Newcastle. Many were forecasting maximum points from a soft batch of fixtures.

Changing the ethos and philosophy of a team takes time, but that is the one commodity an interim coach does not have.

Most worrying perhaps, has been Rangnick’s habitual post-match comments about body language, intensity and physicality. Effort, in short. Luke Shaw ventured into similar territory when he described United as ‘not together’ on the pitch against Wolves.

Aside from a positioning his players in a 4-2-2-2, why is Rangnick struggling to leave his mark on United’s football?
Little evidence of famed high-pressing

While some coaches are coy about discussing their preferences in public, little detective work is needed to deduce what Rangnick wants from his team. He has acquired a reputation as the architect of the fast-paced, vertical, transition-heavy German school of football exemplified by Jurgen Klopp, Julian Nagelsmann and to an extent Thomas Tuchel.

Asked about pressing, Rangnick told the Coaches’ Voice: “It’s about putting the other team under pressure, no matter how high up [the pitch]. The higher up the better, but wherever the ball is, we try to win the ball back.”

Asked about United’s pressing post-Wolves, Rangnick said: “We didn’t press at all. We tried but we were not able to get into those pressing situations.”

The complete absence of such a fundamental tenet of Rangnick’s football is perplexing. If United were pressing badly, or unable to sustain the approach across 90 minutes, that would at least be understandable. So what is going on? There are three potential explanations.

The first is physical and a question of general conditioning, and on this point Rangnick has inherited a difficult situation. United’s pre-season was constructed by a different regime with different methods, and shifting to a more intense approach is not like flicking a switch. There is little time to train between games over the festive period in England, and a potential window to work with the players was taken away when the training ground closed due to Covid.

The second is that pressing cannot be completely separated from how a team plays with the ball. A team will not be in the right structure to contract if they are gifting the ball away within a few passes of regaining possession. United are woefully inaccurate, in almost every department. Pressing relies on players being close together, and if you are hacking the ball downfield for strikers to chase or forcing your defence to drop off because you have coughed the ball up again, you are strung out.

The final and most contentious question is whether United’s forwards have the inclination to press, with Cristiano Ronaldo the thorniest case. Michael Carrick took the step of dropping Ronaldo for a game at Chelsea but, despite the fact they look an awkward marriage, Rangnick has started him in every game. He is not alone, but Ronaldo’s defensive work does not exactly scream “push up behind me” to his team-mates. Why would you step up when the opposition have easy passes on?

In the first half against Wolves, United’s front four – Sancho (25), Greenwood (11), Cavani (21) and Ronaldo (7) – made just three ball recoveries and one successful tackle in the opposition half. The tackle is the green triangle on the right wing with United attacking from left to right:

Wolves were able to complete 77 of 85 passes in their own defensive third at Old Trafford, playing out under little stress.

“The way they press, we prepared to try and understand, when we have the ball we try to understand which men will be free,” manager Bruno Lage said.
Not-so-perfect 10s and the Fernandes problem

A feature of Rangnick’s 4-2-2-2 system is role of the ‘double 10s’, players who start in wide midfield when the team is defending in shape and then occupy pockets of space behind the strikers in possession.

With Paul Pogba out, who would be a prime candidate to play the left-sided 10, United have a shortage of players who are comfortable with the defensive and offensive demands of these roles. Juan Mata would be perfect, but sadly it is not 2012.

United’s squad is too heavy on strikers. Edinson Cavani, Ronaldo, Marcus Rashford and Mason Greenwood would all prefer to be part of the two up front. That means starting two of those players on the bench, something Rangnick seems reluctant to do in part due to a lack of options. Greenwood and Rashford (on form, at least) are more than competent with ball at feet, but their primary skill is not collecting the ball between the lines and stitching things together. They want to be on the last line of defence, closer to the goal, rather than standing in withdrawn positions in the half-spaces.

United’s shape at Newcastle when they played 4-2-2-2 throughout. Note the positions of Rashford (10) and Fernandes (18) in the narrow, ‘double 10’ positions (attacking right to left):

One player who does want the ball in those spaces is United’s chief creator Bruno Fernandes, left out of the XI against Burnley and Wolves. Despite a dip in form and his slightly scatter-gun pass and shot selection, Fernandes is still one of the most productive players in the league. However, in Rangnick’s system, playing as a No 10 also involves dropping back into a wide-left role when the team is defending. It is not like Fernandes’ central role in the 4-2-3-1 United played under Ole Gunnar Solskjaer.

United’s best spell against Wolves came after they changed system to play with a back three and wing-backs, with Fernandes floating behind two strikers and hitting the bar with their best chance.
Full-backs exposed to opposition width

Rather like its close relation the diamond, Rangnick’s 4-2-2-2 is vulnerable to quick switches of play and teams with adventurous full-backs or wing-backs. As Lage made clear after the match, Wolves planned to release wing-backs Marcal and Nelson Semedo quickly whenever United’s two No 10s stayed narrow.

Lage said: “If you look in the first half, when they are defending and trying to block – I saw it from the bench – they have [Edinson] Cavani trying to block Ruben, Cristiano Ronaldo trying to control [Conor] Coady and the wingers inside.

“So the space is outside. That’s why Semedo and Marcal had a lot of chances and a lot of ball in the first half and the boys found those spaces.”

Wolves’ most successful pass combination was from central midfielder Ruben Neves to Semedo, with Neves’ right foot finding his wing-back 13 times. All but two of those passes were in the United half.

2022-01-05
Previous Post: CDC says a test to get out of COVID isolation is not needed : NPR
Next Post: Hong Kong Covid-19: This is what happens when you test positive