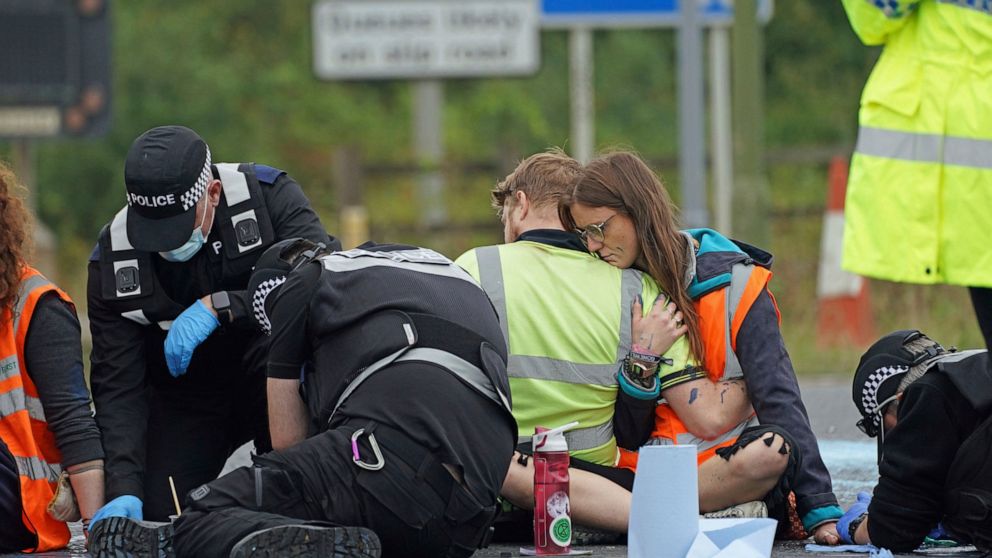 The “Insulate Britain” protesters have targeted the M25, one of the country’s busiest highways, blocking entry roads by gluing themselves to the road and painting the name of their group on the road as well as a blue heart.

Although dozens of protesters have been arrested over the four demonstrations, police are being urged to take swifter action to end the protests.

“And no, I don’t think these people do any favors to their cause. I think that what they do is detract from a very important moral mission that is widely shared now by the people of this country,” he added.

Insulate Britain said Monday that it will keep up the protests.

“Actions will continue until the government makes a meaningful commitment to insulate all of Britain’s 29 million leaky homes by 2030, and all social housing by 2025,” it said in a statement.

Chief Superintendent Nick Caveney from the Hertfordshire Constabulary, which made a further 29 arrests Monday for a total of 76 overall, warned of more disruptions ahead and said police were doing everything they can to stop the protests before they cause traffic chaos.

Other police forces around the 117-mile (188-kilometer) ring road have also made dozens of arrests.

Kent Police said Monday that a dozen protesters were arrested at the Dartford River Crossing, east of the British capital, on suspicion of conspiracy to cause a public nuisance before they were able to gain access to the road.

Follow all AP stories about climate change issues at https://apnews.com/hub/climate.