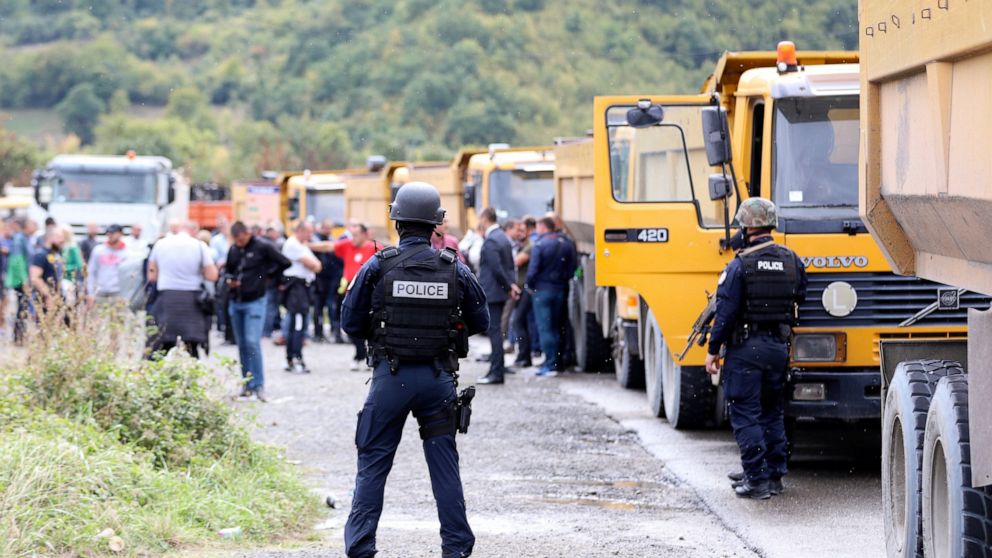 Trucks have blocked the road to the Jarinje and Brnjak border crossing where small groups of Serbs spent the night in tents. An Associated Press photographer wasn’t let onto the road. Other people crossed the border on foot.

Tensions soared Monday when Kosovo special police with armored vehicles were sent to the border to impose a rule on temporarily replacing Serb license plates from cars while they drive in Kosovo.

Kosovo authorities said a 2016 deal reached in European Union-mediated talks had expired and only proper Kosovo symbols are now valid.

Serbian police have for years been taking off registration plates from Kosovo-registered cars entering Serbia.

Hundreds of Kosovo Serbs drove to the border in their cars and trucks, blocking roads leading to the crossing points. Kosovo police fired tear gas at the protesters, but they continued to remain there and keep the road blocked.

Serbia doesn’t recognize its former province of Kosovo as a separate state and considers the mutual border only as an “administrative” and temporary boundary.

Thousands of people were killed and more than 1 million were left homeless after a 1998-1999 bloody crackdown by Serbian troops against Kosovo Albanian separatists. The war ended only after NATO intervened. Kosovo then declared independence in 2008. It has been recognized by the U.S. and other Western nations, but not by Serbia and its allies Russia and China.

Thousands of NATO-led peacekeepers, including U.S. troops, are still deployed in Kosovo, trying to stave off lingering ethnic tensions between majority Kosovo Albanians and Kosovo Serbs.

The EU and U.S. urged Kosovo and Serbia to “immediately, without any delay” exercise restraint and refrain from unilateral actions.

But tension was high Monday with Serbia’s populist president, Aleksandar Vucic, calling the move by Kosovo police as “a brutal attack” and appealing for NATO troops to protect Serbs.

Kosovo Prime Minister Albin Kurti said that as long as Serbia changes the license plates of Kosovo cars when entering there, the same would be applied to Serb cars entering Kosovo.