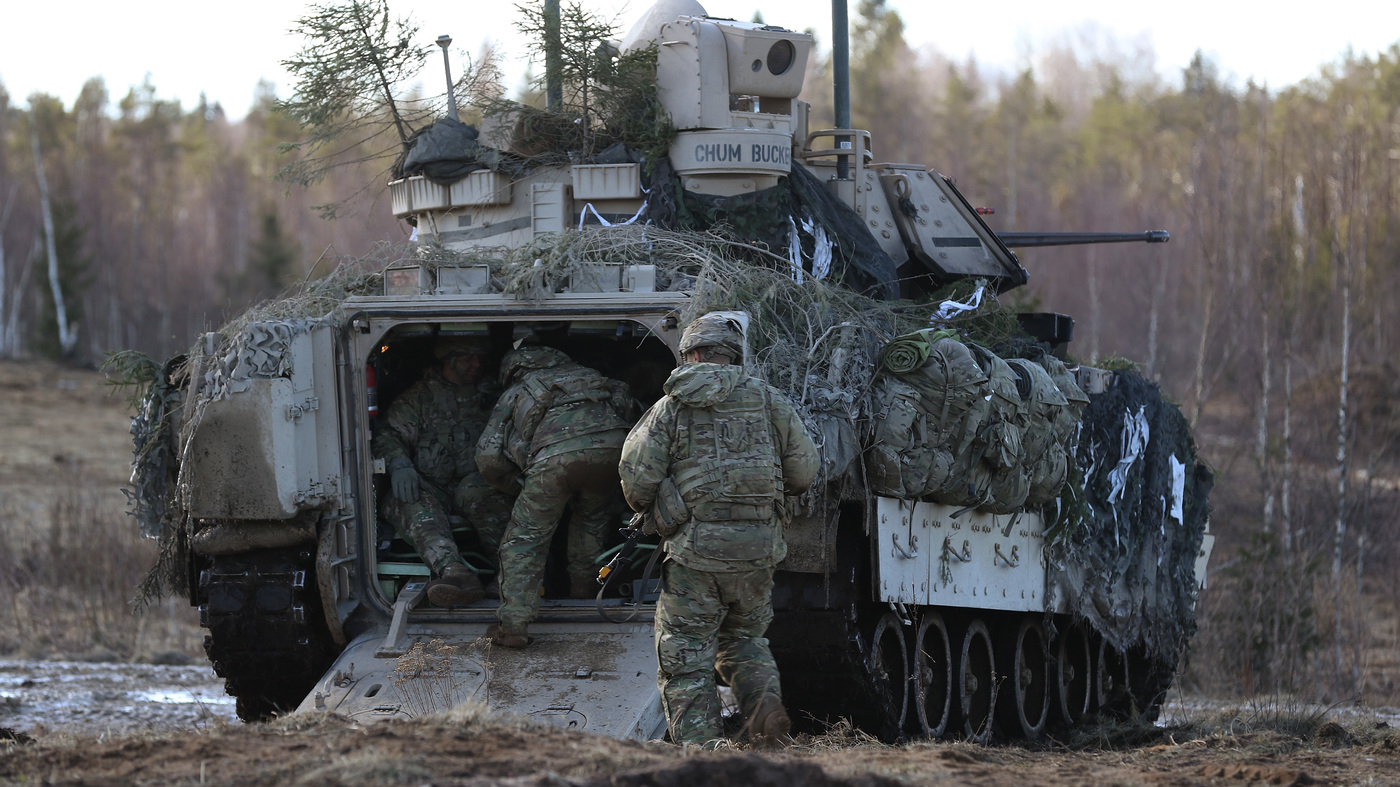 U.S. soldiers take part in a joint military combat exercise with Estonian soldiers in 2017 near Tapa, Estonia. The U.S. is readying 8,500 troops to possibly deploy to Eastern Europe.

U.S. soldiers take part in a joint military combat exercise with Estonian soldiers in 2017 near Tapa, Estonia. The U.S. is readying 8,500 troops to possibly deploy to Eastern Europe.

The Pentagon is placing about 8,500 U.S. troops on heightened alert to possibly deploy to Eastern Europe as Russian forces stand poised for a possible invasion of Ukraine.

Pentagon spokesperson John Kirby said on Monday that the decision to deploy troops has not been made.

Defense Secretary Lloyd Austin “has placed a range of units in the United States on a heightened preparedness to deploy, which increases our readiness to provide forces if NATO should activate the [NATO Response Force] or if other situations develop,” Kirby said.

The NATO Response Force is a multinational force of roughly 40,000 troops that can deploy quickly as needed. The force would be deployed at NATO’s request, Kirby said.

Some U.S. forces are already on heightened alert; Austin heightened their status further, Kirby said, by shortening the number of days it would take to deploy from 10 to five.

“It’s very clear that the Russians have no intention right now of de-escalating,” Kirby said, adding that Austin wanted to give U.S. forces time to “prepare to be on a shorter tether … just in case.”

The countries where the U.S. troops could be sent has not been determined, Kirby said, though he indicated they could be sent to Eastern Europe. Possible destinations include Poland, Romania, Bulgaria or Hungary. The New York Times reported that the Baltic countries — Estonia, Latvia and Lithuania — were also under consideration.

“This is really about reassuring the eastern flank of NATO,” Kirby said.

President Biden has said he has no intention to send U.S. forces to Ukraine itself, but has signaled he is prepared to impose strict economic sanctions on Russia in the event of an invasion. Following a call Monday with European leaders, Biden said the group had reached “total unanimity” on responding to Russia.

The White House said the leaders discussed “preparations to impose massive consequences and severe economic costs on Russia” if it were to invade. They also called for more diplomacy.

Russia has 100,000 troops on the border with Ukraine

Russia has amassed an estimated 100,000 troops across the border from Ukraine at different locations. Moscow has denied it intends to invade, though U.S. officials fear an offensive could be imminent.

The U.S. already has hundreds of military advisers and trainers in Ukraine who have regularly rotated in since 2015.

The U.S. has also sent Ukraine military aid, most recently a shipment of 200,000 pounds of “lethal aid” including ammunition that arrived on Friday. The U.S. sent 30 Javelin anti-tank guided missile systems in October and has also sent radar systems, anti-tank weapons and equipment to take out drones over the past several years.

Other NATO members are pledging to send ships or jets to Eastern Europe. NATO Secretary General Jens Stoltenberg said on Monday that Denmark, France, the Netherlands and Spain were sending or considering sending military support to Lithuania, Romania or Bulgaria or to either the Black Sea or the Baltic Sea.

“We will always do what is necessary to protect and defend all our allies. And I welcome that allies are stepping up,” Stoltenberg said.

Stoltenberg called for more diplomacy to deescalate tensions. U.S. Secretary of State Antony Blinken has been holding meetings with Russian Foreign Minister Sergey Lavrov, but the two have not achieved any breakthroughs. They most recently met on Friday in Geneva, where they agreed to keep talking.

The U.S., meanwhile, ordered family members of personnel at its embassy in Kyiv to leave Ukraine over the weekend and authorized the voluntary departure of some staff over security concerns. The U.K. on Monday said it was withdrawing some staff from its embassy while Australia told its citizens in Ukraine to leave.