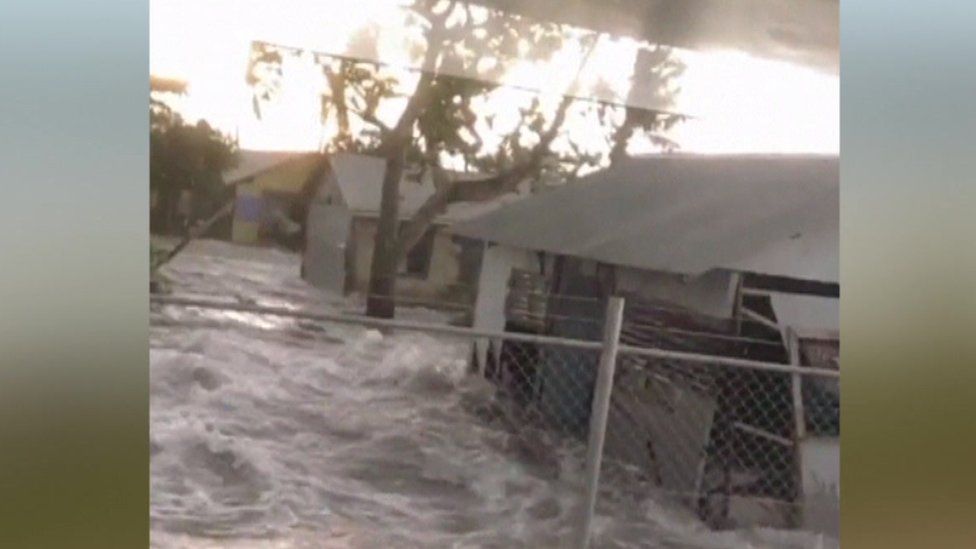 Pacific volcano: Ash-covered Tonga is like a moonscape say residents

A massive volcanic eruption in Tonga that triggered tsunami waves has smothered the Pacific islands in ash, cut power and severed communications.

Information from Tonga is scarce but no deaths have been reported so far.

Locals say Tonga looks “like a moonscape” after being coated in a layer of volcanic ash.

Aid charities said the ash and smoke had prompted authorities to tell people to drink bottled water and wear face masks to protect their lungs.

The underwater volcano erupted on Saturday, sending a plume of ash into the sky and triggering warnings of 1.2m (4ft) waves reaching Tonga. The eruption was so loud it could be heard in New Zealand, some 2,383km (1,481mi) from Tonga.

Ms Ardern said power was being restored to some parts of the island and mobile phones were slowly starting to work again. But the situation in some coastal areas remained unknown.

Unable to speak to their friends and family, many Tongans in Australia and New Zealand have grown concerned for their safety.

Fatima said she had not heard anything from her colleague who runs a seafront restaurant in Tonga’s capital Nuku’alofa.

“It’s all very sad, we are hoping for the best,” she told the BBC. “This will hit them so hard as they have been in lockdown a long time with no tourists visiting and now this.”

New Zealand and Australia are sending surveillance flights to assess the extent of the damage.

Satellite images suggest some outlying islands have been completely submerged by seawater.

Experts say the eruption of the Hunga-Tonga-Hunga-Ha’apai volcano is one of the most violent in the region in decades.

It triggered tsunami warnings in several countries, including Japan and the US, where flooding hit some coastal parts of California and Alaska.

UK Foreign Office minister Zac Goldsmith called the situation in Tonga “shocking” and said Britain stood “ready to help and support our Commonwealth friend and partner in any way we can”.

Scientists got their first look at Hunga Tonga Hunga Ha’apai post-eruption on Saturday when the EU’s Sentinel-1A satellite flew overhead.

This spacecraft is a radar platform and can see through obscuring cloud and ash to the surface below.

It showed clearly that much of the crater rim that stood above the ocean waters had been destroyed – a testament to the ferocity of the blast.

Researchers will be keen to understand the cause of a tsunami that produced waves not just on nearby islands but at beaches right around the Pacific.

To what extent was the explosion itself responsible? Pressure waves can make what are termed “meteotsunami”. Or perhaps the displacement of water was the result of an unseen collapse of part of the volcano below the ocean surface.

More data in the coming days and weeks will establish the facts.

2022-01-16
Previous Post: Pharma boss barred from industry for life over price gouging
Next Post: Ex-leader Poroshenko to go to Ukraine to face charges