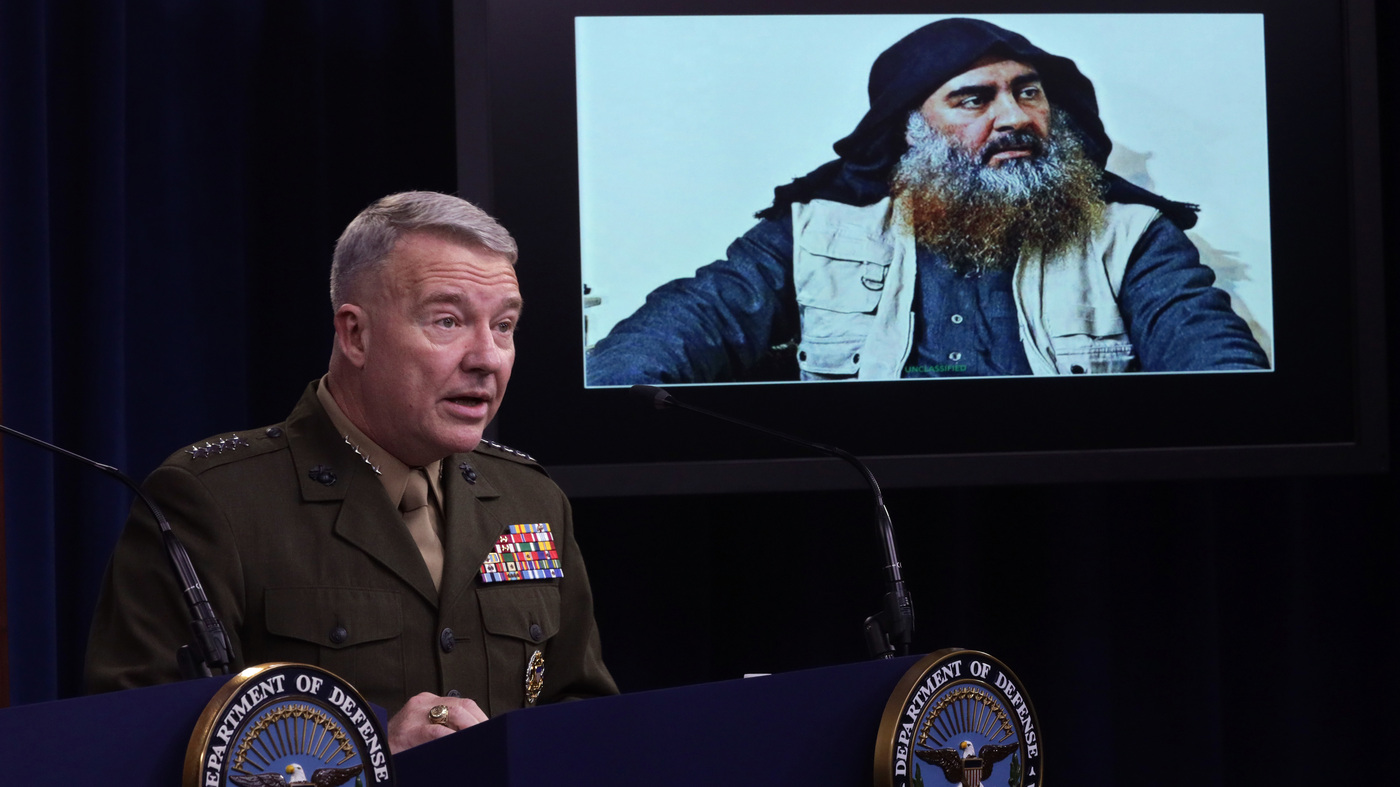 Marine Corps Gen. Kenneth McKenzie, commander of U.S. Central Command, speaks as a picture of Abu Bakr al-Baghdadi is displayed during a news briefing on Oct. 30, 2019, at the Pentagon in Arlington, Virginia. McKenzie spoke to reporters to provide an update on the special operations raid that targeted the Islamic State leader in Idlib province, Syria.

Marine Corps Gen. Kenneth McKenzie, commander of U.S. Central Command, speaks as a picture of Abu Bakr al-Baghdadi is displayed during a news briefing on Oct. 30, 2019, at the Pentagon in Arlington, Virginia. McKenzie spoke to reporters to provide an update on the special operations raid that targeted the Islamic State leader in Idlib province, Syria.

NPR has sued the U.S. Defense Department to make it release documents regarding possible civilian casualties during the October 2019 military raid in Syria that resulted in the death of Islamic State leader Abu Bakr al-Baghdadi.

In late 2019, NPR reported claims that U.S. helicopter fire killed two Syrian civilians and blew the arm off another civilian during the raid, prompting U.S. Central Command to investigate. Last year, the Pentagon cleared troops of wrongdoing, classifying the Syrian victims as enemy combatants and ruling that their families were ineligible for funds the U.S. grants to civilians killed by U.S. attacks abroad.

But the Pentagon’s account of events offered no evidence the three men were combatants or intended to threaten troops, raising the question of whether the U.S. mischaracterized innocent civilians to protect a celebrated operation against the leader of the Islamic State.

NPR petitioned Central Command to release documentation relating to the operation and the investigation, including military footage of the operation, Pentagon assessments of whether the victims’ families were eligible for payment and any communications by top Defense Department officials discussing the possibility that civilians were killed and maimed.

“We hope that the truth will come out and that the United States will admit that it committed a mistake against civilians,” said Mustafa Shaaban, a relative and close friend of Barakat Barakat, the Syrian man who says he lost his right arm and the use of most of his fingers on his left hand in the attack.

Release of the records could shed light on the circumstances of the attack and whether the Pentagon covered up evidence of civilian casualties or failed to thoroughly investigate the claims. The Pentagon says it investigates allegations of civilian harm and allocates money for condolence payments to families of civilian victims.

NPR filed its lawsuit Wednesday in the U.S. District Court for the Southern District of New York. The suit alleges the Pentagon failed to comply with its legal obligation to provide documents or respond in a timely manner to NPR’s requests under the Freedom of Information Act.

“The records regarding civilian harm sought by the Requests are essential for ensuring transparency and accountability for the actions taken by the U.S. government. The public interest at stake in the release of these documents is of the utmost importance,” the lawsuit states.

A Pentagon spokesman did not immediately respond to a request for comment about the suit.

The Pentagon has come under scrutiny over its role in recent civilian casualties in Afghanistan and Syria.

U.S. Central Command initially said its 2021 drone strike targeting members of the Islamic State’s Afghanistan affiliate was “a righteous strike,” but later called it a “tragic mistake” after media including The New York Times and The Washington Post reported on civilian casualties. A separate Times investigation alleged that military officials attempted to cover up a 2019 airstrike in Syria that is believed to have killed several dozen civilians.

“U.S. Central Command has a documented history of overlooking civilian deaths and injuries until challenged by the media,” NPR’s lawsuit says. “The records sought in this Request, which pertain to yet another air strike where CENTCOM may have undercounted civilian deaths, are of vital public importance.”