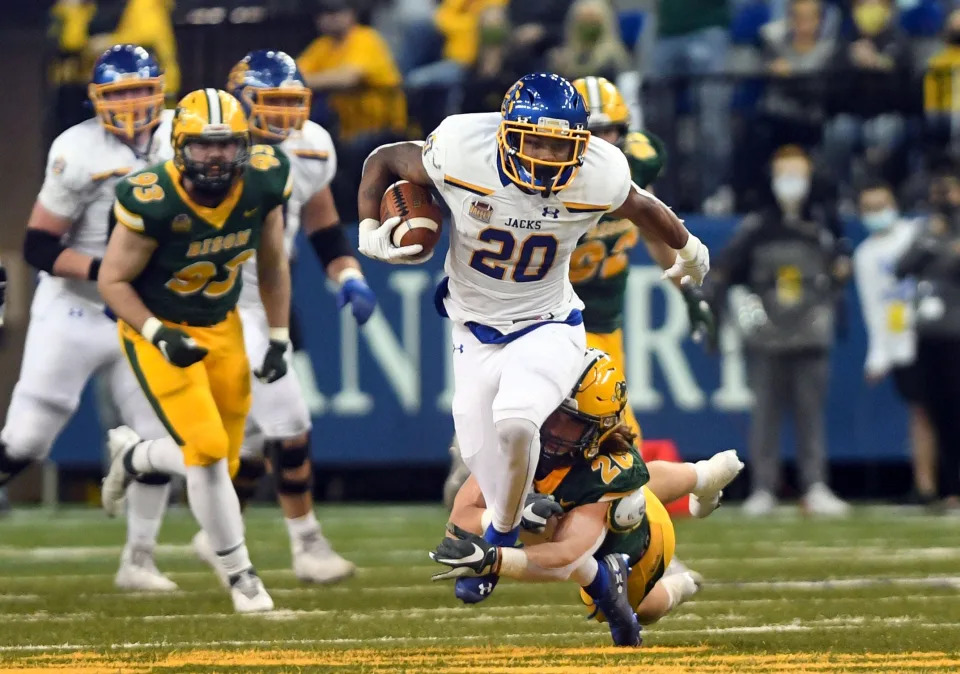 The Unpacking Future Packers Countdown is a countdown of 100 prospects that could be selected by the Green Bay Packers in the 2022 NFL Draft.

The Green Bay Packers had one of the best running back duos in the NFL this season. Both Aaron Jones and A.J. Dillon had over 1,000 yards from scrimmage.

With those two in place for next season, the running back position won’t be high on the priority list this offseason.

However, there is some uncertainty behind Jones and Dillon. Kylin Hill showed promise before suffering a season-ending knee injury. How will the Mississippi State product look coming back from that injury?

In a meaningless game against the Detroit Lions, Patrick Taylor flashed No. 3 running back potential. The former Memphis running back rushed for 53 yards and scored a touchdown.

With the potential that Hill and Taylor showed this past season, the Packers may not even have a running back on their draft board.

Although, if the opportunity presents itself for the Packers to add a dynamic playmaker on day three of the 2022 NFL Draft, Gutekunst could opt to add another horse to an already impressive stable.

A player that may catch the attention of Green Bay’s general manager is Pierre Strong Jr. The South Dakota State University running back checks in at No. 93 in the Unpacking Future Packers countdown.

Strong earned Missouri Valley Conference Freshman of the Year in 2018. The Arkansas native rushed for 1,116 yards and 11 touchdowns. Over the last six games of the season, Strong averaged 152.6 yards per game and had five 100-yard games. On the season Strong averaged nearly 10-yards per attempt (9.5).

In 2019, Strong rushed for 1,018 yards and eight touchdowns. He also added one receiving touchdown.

During nine games in the spring of 2020, Strong rushed for 707 yards and three touchdowns. He added one receiving touchdown, which was the game-winner during the season opener against Northern Iowa.

This past season, Strong led the FBS in rushing yards (1,686). Strong added 18 rushing touchdowns and also had four pass touchdowns.

“After rushing for over 1,000 yards in each of his first two seasons, Strong was banged up his junior year and wasn’t as effective,” Matt Zimmer, the SDSU reporter for The Argus Leader, said. “While it would be a stretch to say he lost his spot as the team’s No. 1 back, Isaiah Davis did usurp him at times and ended up leading the team in rushing in the 2021 spring season.

Strong got healthy and worked hard over the offseason to improve his diet, flexibility, and speed and it paid immediate dividends. He was faster, more explosive, and carried a heavy load when Davis suffered a serious injury. It was by far his best season as a Jackrabbit.”

Strong checks all the boxes. He has the tools (vision, balance, velvet feet) to be a three-down running back at the next level.

“A combination of all the skills you’d want,” Zimmer said. “Foot speed, vision, balance, and durability. He had a tremendous offensive line that often created huge holes that led to explosive runs that added to his at times ridiculous yards per carry average.”

First and foremost, Strong has excellent vision. He’s a patient runner that sets up his blocks and has quick eyes to locate the cutback lane.

“I think his vision and instincts are probably his greatest strength,” Zimmer said. “He’s fast but not a burner. Tough but not a battering ram. But he has an uncanny ability to find a tiny crease and get through it, and he got better during his career at finding the hole before it opened. That ability coincided with improving at getting north and south and not spending too much time dancing or waiting for a hole.”

Strong has big-play ability. During his career in Brookings, he averaged 7.1 yards per carry. He has fancy footwork to make sharp lateral cuts and has the quickness to win the corner.

Strong rarely goes down on first contact and does a great job of creating yards after contact. He’s an elusive runner due to his balance, footwork and he is able to move well laterally without slowing down.

“His balance is probably his biggest strength in helping him create yards after contact,” Zimmer said. “He didn’t often run people over but he was difficult to tackle solo in the open field because he’s slippery and will often stay on his feet after initial contact.”

As a pass-catcher, Strong possesses soft hands. He finished his Jackrabbit career with 56 receptions.

Strong will be competing in the Shrine Bowl in Las Vegas. It will be interesting to see how he looks in pass protection during practice.

“He’s a reliable pass catcher and while it remains to be seen if he can hold up in pass pro against NFL defenders it was a skill coaches often mentioned he took seriously and worked to improve on,” Zimmer said. “His career pass totals are worth noting, too: 9-for-9 with six TDs.”
Fit with the Packers

The Packers have a two-headed monster at running back with Jones and Dillon. It would be absolutely shocking to see them spend a premium pick on a running back.

Strong is a day-three pick that has an exciting skillset that reminds me a bit of Darren McFadden, with his fancy footwork and ability to hit the cutback lane to bust off a big run.

“He’s a low risk, high reward guy in the middle to late rounds,” Zimmer said. “He may not be ready to carry the load for an NFL offense but on a team with a good offensive line and passing attack he’d have a chance to be a productive back in the pro game.”

Gutekunst has already shown that he’s not afraid to add a running back to an already talented running back room. He selected Dillon in the second round when the Packers had Jones and Jamaal Williams in place.

The next year Dillon replaced Williams as the team’s number two back at 1265 Lombardi Avenue.

There is a potential out in Jones’ contract following next season. It’s possible that Gutekunst selects a running back with the thought of potentially replacing Jones if they decide to move on from the dynamic back.

Either way, selecting Strong would give the Packers another dynamic back that could help improve Green Bay’s return game.

Fun Fact: The last time an SDSU running back got drafted was in 1962, when the Packers Joe Thurne.