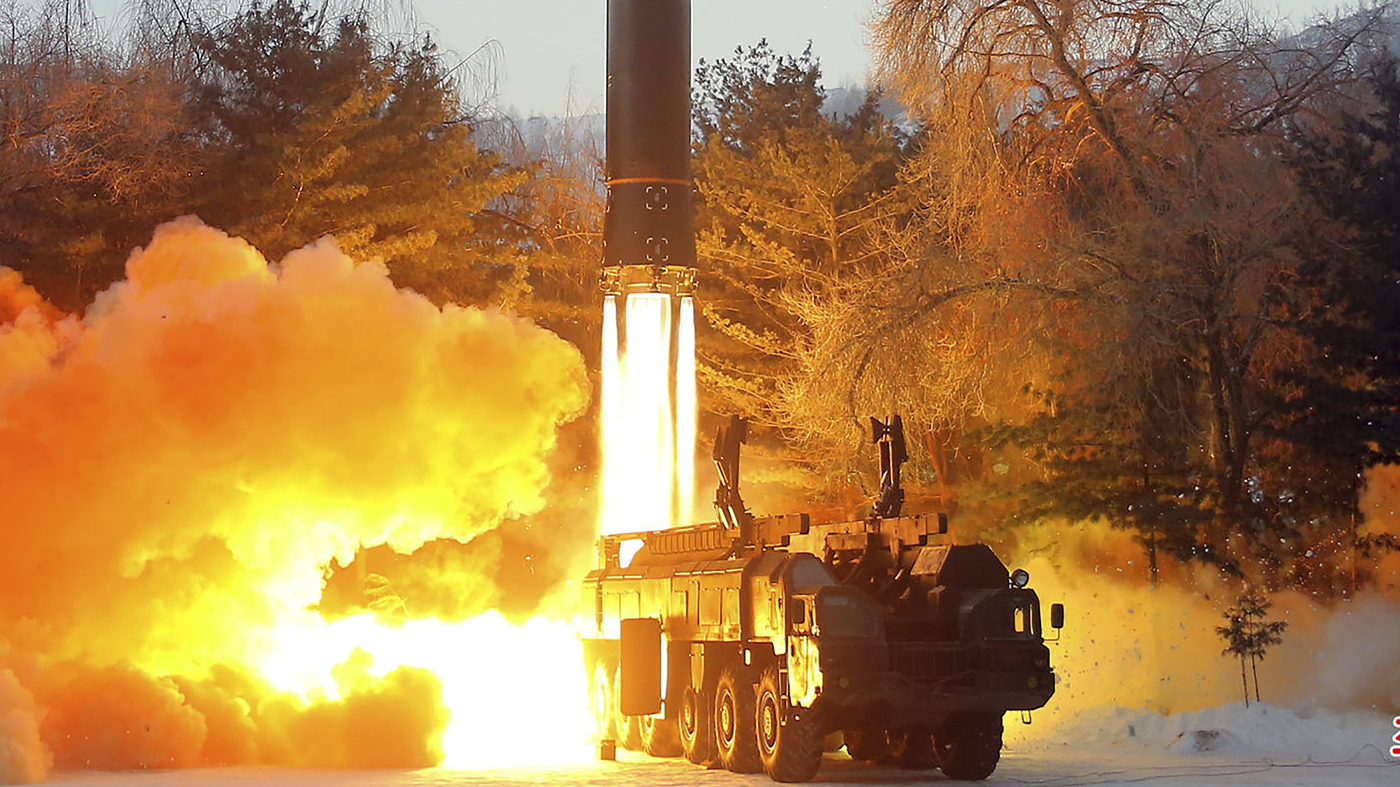 This photo provided by the North Korean government shows what it says was a test launch of a hypersonic missile in North Korea Wednesday, Jan. 5, 2022.

This photo provided by the North Korean government shows what it says was a test launch of a hypersonic missile in North Korea Wednesday, Jan. 5, 2022.

Wednesday’s launch, the North’s first known weapons test in about two months, indicates the country will press ahead with plans to modernize its nuclear and missile arsenals rather than return to disarmament talks anytime soon.

The official Korean Central News Agency said the Central Committee of the ruling Workers’ Party expressed “great satisfaction” at the results of the missile test, which was observed by leading weapons officials.

Hypersonic weapons, which fly at speeds in excess of Mach 5, or five times the speed of sound, could pose crucial challenges to missile defense systems because of their speed and maneuverability. It’s unclear whether and how soon North Korea could manufacture such a high-tech missile, but it was among a wish-list of sophisticated military assets that Kim disclosed early last year, along with a multi-warhead missile, spy satellites, solid-fueled long-range missiles and underwater-launched nuclear missiles.

Wednesday’s test was the second of its kind since North Korea first launched a hypersonic missile last September.

“The successive successes in the test launches in the hypersonic missile sector have strategic significance in that they hasten a task for modernizing strategic armed force of the state,” a KCNA dispatch said.

The word “strategic” implies the missile is being developed to deliver nuclear weapons.

KCNA said the missile made a 120-kilometer-long (75 mile) lateral movement before hitting a target 700 kilometers (435 miles) away. It said the test reconfirmed the flight control and stability of the missile and verified its fuel capsule under the winter weather conditions.

While North Korea appears to have made progress in the development of a hypersonic missile, it still needs more test flights to determine whether it meets its tactical objectives or how advanced a hypersonic weapon it could develop, said Lee Choon Geun, an expert and honorary research fellow at South Korea’s Science and Technology Policy Institute.

A photo of the launch shows that the upper parts of the missiles launched in September and this week have different shapes. Lee said this suggests that North Korea is testing two versions of warheads for a missile still under development or it is actually developing two different types of hypersonic missiles.

He said the missile’s reported lateral movement would provide the weapon with a greater maneuverability to evade enemy missile defense systems.

Kim Dong-yub, a professor at the University of North Korean Studies in Seoul, said North Korea will likely go ahead with its arms build-up plans without being affected by external factors like the Beijing Olympics in February, the South Korean presidential election in March and a possible change in the Biden administration’s North Korea policy.

“Given the U.S. has decided on a diplomatic boycott of the Beijing Olympics, North Korea doesn’t have to worry about what China would think when it conducts” weapons tests, Kim said.

China is North Korea’s last major ally and aid benefactor. Some experts earlier predicted that North Korea would not launch any provocations until the Beijing Olympics ended.

Tae Yongho, a former North Korean diplomat who now serves as a lawmaker in South Korea, wrote on Facebook that Pyongyang is keeping its borders shut due to fears about the pandemic. But he said Pyongyang is still working to perfect its missile technology to boost its position in any future negotiations.

The North’s latest launch was first detected by its neighbors.

The U.S. military called it a ballistic missile launch that “highlights the destabilizing impact of (North Korea’s) illicit weapons program,” while South Korea and Japan expressed concerns or regrets over the launch. China, for its part, called for dialogue and said that “all parties concerned should keep in mind the big picture (and) be cautious with their words and actions.”

U.S.-led diplomacy on North Korea’s nuclear program remains stalled since 2019 due to disputes over international sanctions on the North. The Biden administration has repeatedly called for resuming the nuclear diplomacy “anywhere and at any time” without preconditions, but North Korea has argued the U.S. must first withdraw its hostility against it before any talks can restart.

During last week’s plenary meeting of the Central Committee of the ruling Workers’ Party, Kim Jong Un repeated his vow to expand his country’s military capabilities without publicly presenting any new positions on Washington and Seoul.

The North’s advancing nuclear arsenal is the core of Kim’s rule, and he’s called it “a powerful treasured sword” that thwarts potential U.S. aggressions. During his 10-year rule, he’s conducted an unusually large number of weapons tests to acquire an ability to launch nuclear strikes on the American mainland. But his country’s economy has faltered severely in the past two years due to the COVID-19 pandemic, the sanctions and his government’s own mismanagement.

2022-01-06
Previous Post: Communist-era judge wanted by Poland dies in Sweden at 91
Next Post: As coronavirus cases rise, so do political risks