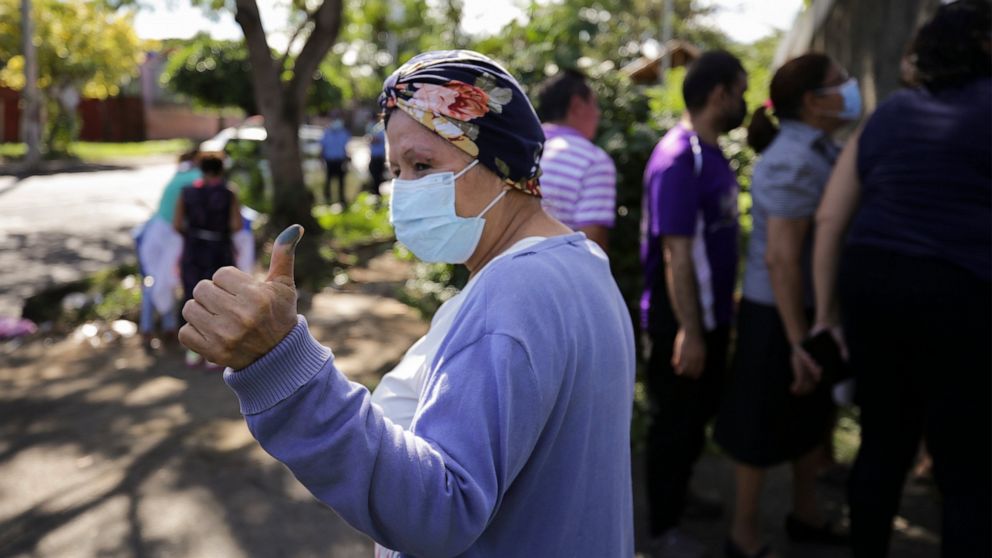 MANAGUA, Nicaragua — Nicaraguan President Daniel Ortega sought a fourth consecutive term in elections Sunday against a field of little-known candidates while those who could have given him a real challenge sat in jail.

More than 13,000 polling places opened Sunday morning even as the opposition denounced more arrests of its leaders in activists around the county in the hours leading up to the vote and Ortega railed against alleged interference from the United States.

The opposition called on Nicaraguans to stay home in protest of an electoral process that has been roundly criticized as not credible by foreign powers.

The election will determine who holds the presidency for the next five years, as well as 90 of the 92 seats in the congress and Nicaragua’s representation in the Central American Parliament. More than 4.4 million Nicaraguan age 16 and above were eligible to vote.

Ortega’s Sandinista Front and its allies control the congress and all government institutions. Ortega first served as president from 1985 to 1990, before returning to power in 2007. He recently declared his wife, Vice President Rosario Murillo, his “co-president.”

In June, police arrested seven potential presidential challengers on charges that essentially amount to treason. They remained in detention on election day. Some two dozen other opposition leaders were also swept up ahead of the elections.

The other contenders on Sunday’s ballot were little known politicians from minor parties seen as friendly with Ortega’s Sandinista Front.

On Saturday, the Blue and White National Union, an opposition alliance, issued an alert after at least eight of its leaders were “abducted by the regime in illegal raids” Saturday afternoon and evening.

The Civic Alliance, another opposition coalition, reported “harassment, surveillance, intimidation, assault, attacks, illegal and arbitrary detentions” of some of its leaders around Nicaragua.

The National Police had not confirmed nor denied the opposition reports.

Voting through the morning appeared to be calm and without long lines.

Around midday, Ortega spoke live on television after voting — he held up his inked finger.

He blasted the United States for interference in Nicaragua, noted there had been alleged fraud in the last U.S. election, reminded that those who stormed the U.S. Capitol were called terrorists and remain jailed. He repeated his claim that the U.S. government supported huge protests in Nicaragua in April 2018, which he has called an attempted coup.

“The immense majority of Nicaraguans are voting for peace and not for war and not for terrorism,” he said.

One of the first to vote Sunday was Foreign Minister Denis Moncada at a secondary school in the capital. “The majority of Nicaraguans are going to elect today Commander Daniel (Ortega), comrade Rosario (Murillo) and the deputies,” Moncada said to pro-government news outlets.

He said the peaceful vote sends a message to the world powers that “Nicaraguans are dignified patriots and we are not going to bend to their threats, sanctions and non-recognition of the elections.”

Presidential candidate Guillermo Osorno of the small Christian Path party voted early Sunday. He promised that if he defeated Ortega he would “change the electoral system” and allow election observers.

Meanwhile in Costa Rica, hundreds of Nicaraguans living in exile there protested against Ortega’s government, calling Sunday’s vote an “electoral circus” and demanding the release of political prisoners.

“We are protesting against the fraud and asking for justice for those killed,” said Kevin Monzón, a young influencer who fled to Costa Rica in late September after receiving threats.

With little doubt as to the presidential election result, focus is already turning to what the international response will be as Ortega seeks to tighten his grip on power.

The United States and European Union have imposed sanctions against those in Ortega’s inner circle, but Ortega responded only by arresting more of his opponents.

On Friday, a senior U.S. State Department official, who spoke with reporters on the condition of anonymity, said the U.S. government was willing to consider additional targeted sanctions, but had tried to avoid measures that would more broadly impact the Nicaraguan people.

“It is very hard when you have a government that has very minimal goals that include remaining in power at any cost and disregarding the will of their own citizens or the needs of the citizens to retain that power,” the official said.

The Organization of American States has condemned Nicaragua’s holding of political prisoners and unwillingness to hold free and fair elections, but Ortega’s government has only railed against foreign interference.

The regional body will hold its annual general assembly in Guatemala later this week. Guatemala, Honduras and Mexico were among seven countries that abstained from a vote on a resolution last month in the OAS condemning the repression in Nicaragua.

In Nicaragua, polls were scheduled to close at 6 p.m. Sunday and the Supreme Electoral Council said the first partial results would be released around midnight. Provisional vote totals are expected Monday.

Some 30,000 police and soldiers were deployed to secure voting, according to the government.

Gerardo Berthin, director of Latin American and Caribbean programs for the democracy promotion organization Freedom House, said Sunday the vote was going as scripted by Ortega.

“This is what they want in terms of showing people voting, even though we know that they have lists actually of people who work for the government and they are checking who’s going and who is not,” Berthin said.

He said he hoped the international community would present a more unified front and increase pressure on Ortega, including through international lending institutions that have kept his government afloat.

Freedom House monitors civil rights in countries around the world. Berthin said Nicaragua is one of the countries where fundamental rights have deteriorated the most in the past 15 years.