By: Melanie Mason
In: Uncategorized
With: 0 Comments 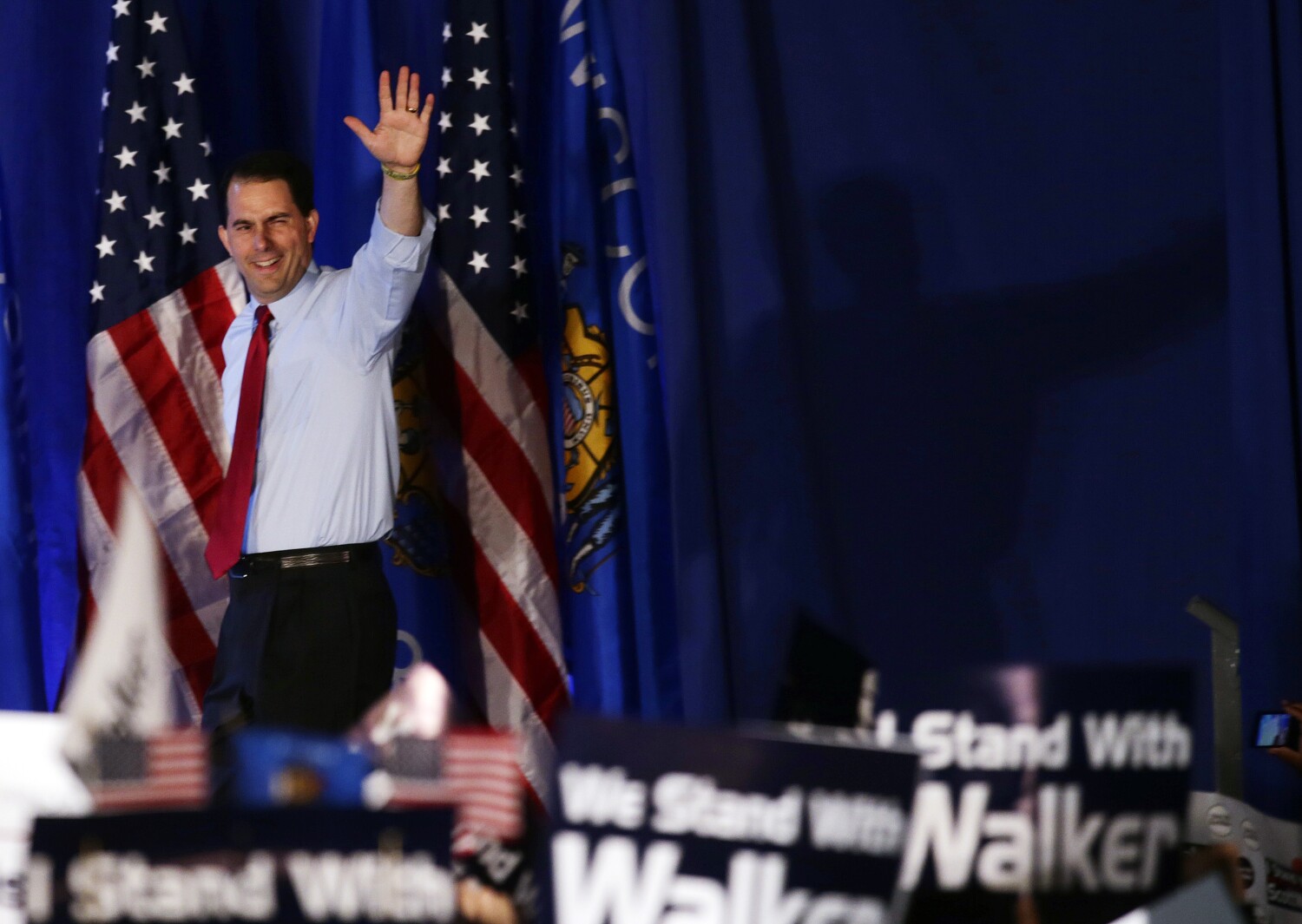 In his fight to keep his political life afloat, Gov. Gavin Newsom has staked his future on how well he can emulate a budget-slashing tea party darling: former Wisconsin Gov. Scott Walker.

Walker may seem an unlikely role model for the liberal Californian, but he has notched one big accomplishment that Newsom now covets. The Republican is the only governor in American history to successfully beat back a recall. He did so in 2012 by pivoting from playing defense on his record, namely a highly polarizing measure to clamp down on organized labor, to going on offense against those trying to remove him.

“We made it about union bosses,” Walker said in an interview, “and eventually [Tom] Barrett,” the Democrat who ultimately ran against him.

Newsom, a close labor ally, would almost certainly not endorse the sentiment, but his campaign has adopted an identical strategy. In his case, the foils are Republicans, whom Newsom never fails to connect to the recall.

His official campaign committee is named “Stop the Republican Recall.” The word “Republican” appears more than 10 times in his official voter guide submission, along with phrases like “power grab” and “takeover of our state.” His television ads make a point of referring to former President Trump.

In a state where there are nearly 5 million more registered Democrats than Republicans, Newsom’s team hopes running against the GOP is enough to save him from suffering the same fate as Gray Davis, California’s Democratic governor who was ousted in 2003, 11 months after he was elected to a second term.

This year’s recall “in every way has been far more similar to Walker’s,” said Sean Clegg, a top Newsom strategist. “The big thing Gray failed to do was make a coherent case about who was bringing the recall and why. That’s been our theory of the case since day one. It’s why we branded it a ‘Republican recall.’”

For Newsom, whose national image has been bruised by the seriousness of the recall effort against him, there is plenty of inspiration to be found in Walker’s win. In 2012, the Wisconsin governor emerged from his recall attempt with new strength that powered his reelection campaign two years later and, briefly, a buzzy presidential bid.

But although Walker may offer a road map for a Newsom victory, a close look at the Wisconsin race also underscores the challenges, both procedural and political, facing the California governor that may complicate his dreams of resurgence.

Ten years ago, it was Walker whose political future appeared shaky. Just one month after the Republican took office as governor, he pushed through a measure to dramatically curtail collective bargaining rights and hobble the power of labor unions. In Wisconsin, a state with a deep tradition of organized labor, the measure was immediately a flashpoint. Crowds as large as 100,000 protested at the state Capitol in Madison, and calls for Walker’s recall were a popular rallying cry, often broadcast on the cable news networks that breathlessly covered the developments.

“That was the height of my opposition’s support and the low point for me,” said Walker, recalling how Time magazine mused if he was “Dead Man Walker.”

But he had a lucky break. Wisconsin’s election laws require that a politician serve at least one year in office before a recall can be initiated. By the time Walker would actually face the voters in 2012, the delay had tempered the outrage around the bill, known as Act 10. In the meantime, Walker sold himself as a governor who got things done, even if they were unpopular, a pitch that even Democrats conceded worked with swing voters.

The campaign also found an effective boogeyman in labor leaders. The attack diverted attention from more politically sympathetic rank-and-file workers, such as teachers who had been highly visible in the protests.

Union leaders were “the ones that exerted undue influence, getting governors and legislatures to approve contracts and benefits that were out of line with the private sector and ability of state and local governments to pay,” said Keith Gilkes, Walker’s campaign manager. “They were the villains in this.”

Wisconsin Democrats saw the tactic as class warfare. Regardless, Walker’s message offered voters someone to blame as the economy shakily emerged from the Great Recession.

The strategy echoes that of Newsom’s today. His closing theme paints Republicans, particularly front-runner Larry Elder, the radio host, as resistant to vaccines and mask mandates. The clear hope is voters take out their frustration over the protracted pandemic on the recall proponents.

“It’s a matter of life and death,” one recent Newsom ad intoned. “Stop the spread…. Protect California by voting no on the Republican recall.”

Whether it’s highlighting Elder or anti-immigrant and extremist connections among the recall’s original group of signature collectors, the overall message has been to portray the recall as a conservative effort that is at odds with California’s liberal tilt.

California Democrats “see this recall for what it is — a Republican-led effort to grab power using the recall process because they can’t win any other way,” said Nathan Click, a spokesman for Newsom’s campaign.

Walker said it was logical that Newsom would follow his example, adding that making the race about Republicans was “not a bad strategy to begin with.”

But the former governor, who now leads the conservative Young America’s Foundation, said it may not be so simple for Newsom to follow his successful formula. He noted that it’s hard to run against Trump, who is not in office anymore, or the state Republican Party, which has not won a statewide campaign since 2003.

And although Walker benefited from the timing of the recall in Wisconsin, Newsom’s political atmosphere is far more challenging, as the Delta variant of the coronavirus threatens the governor’s claim that California is on the rebound.

“Act 10 was a political decision instigated by Gov. Walker. He created a wave and he was able to ride it successfully,” said Paul Maslin, a Democratic strategist and veteran of the Davis and Walker recalls. “COVID is a wave that is breaking all over the place … and poor Gavin Newsom is out in the middle of the ocean trying to get to shore.”

For much of his first 18 months in office, Walker considered the recall to be a major threat. His opponents collected more than 1 million signatures to qualify for the ballot, nearly twice as many as they needed. But the GOP found its voters equally engaged.

“We didn’t have to light up the base. The base was lit red hot from day one,” Gilkes said.

Walker capitalized on the widespread attention to his race, including outsize interest and money pouring in from out-of-state labor unions and conservative advocacy groups that saw the state as a proxy war for labor rights broadly.

Enthusiasm among Republicans became clear about a month before the recall contest. (In Wisconsin, a governor facing a recall runs directly against an opponent, another key procedural difference from California, where the ballot is split into two questions on whether Newsom should be recalled, and if so, who would replace him. )

Democrats had a semi-competitive primary and selected Milwaukee Mayor Tom Barrett, whom Walker had beat in the 2010 governor’s race. Walker in effect ran unopposed in the GOP contest — but received nearly as many votes as all of the Democratic candidates combined.

“We realized our voters were not showing up and protesting. They weren’t out getting signatures. But they were pissed off,” Walker said.

For those wanting to oust Walker, the primary was “a pit-in-the-stomach moment,” said Mike Tate, then the chairman of the Wisconsin Democratic Party.

When the recall vote was held in June, Walker won by 7 percentage points — slightly exceeding his margin from two years earlier — and cemented his political stature.

“There’s no question that Walker emerged stronger,” Tate said. “It sure as hell emboldened him and his team. It set them on a trajectory that made it much harder in 2014 [to beat him] than it already would’ve been.”

As Californians now weigh in on Newsom, there is more uncertainty about whether he has galvanized the Democratic base as successfully as Walker did. Early polling showed opposition to the recall far outpacing support, but the race appeared to tighten because Republicans were far more enthused about the election than Democrats.

“Apathy is the real opponent here,” said Clegg, Newsom’s strategist. “What do you have to do? You have to activate those partisan cues. You have to lay out a compelling case to people of what are the stakes if this thing really happens.”

Newsom’s team says the focus on Republicans, and increasing national attention on the race, has helped juice enthusiasm among his base. His campaign notes that so far Democrats are outpacing the GOP in sending in their mail-in ballots — an imprecise metric given that there’s no indication how those Democrats voted and Republicans are expected to turn out in higher numbers on election day.

The best-case scenario, his advisors envision, is a victory in September sparking a political turnaround like that of Walker, who used the recall as a jumping-off point for his national ambitions. (In the end, Walker’s presidential bid lasted less than three months in 2015 and he narrowly lost the 2018 governor’s race.)

“Republicans with this really partisan recall against Gavin Newsom — I think at the end of the day they will have created a comeback vehicle for this governor,” Clegg said. “Everyone loves a comeback story.”

True, said Walker, but it may not be enough for Newsom to simply survive the recall, given how he appeared poised to beat it handily earlier this year.

“Most people nationally are shocked that he’s even got a race,” Walker said. “He’s got to win by a whole lot for it to be a net positive.”

Newsom may not much appreciate the setting of high expectations, or the fact that Walker hopes that after Sept. 14, he’ll remain the only American governor to have ever defeated a recall. But the California Democrat probably has little to quibble with when it comes to the Wisconsin Republican’s view of the procedure overall.

“Recalls should be for what other states might use impeachment for — malfeasance in office, or a crime committed,” Walker said. Other than that, he added, “I’m not a fan of recalls, in any state.”