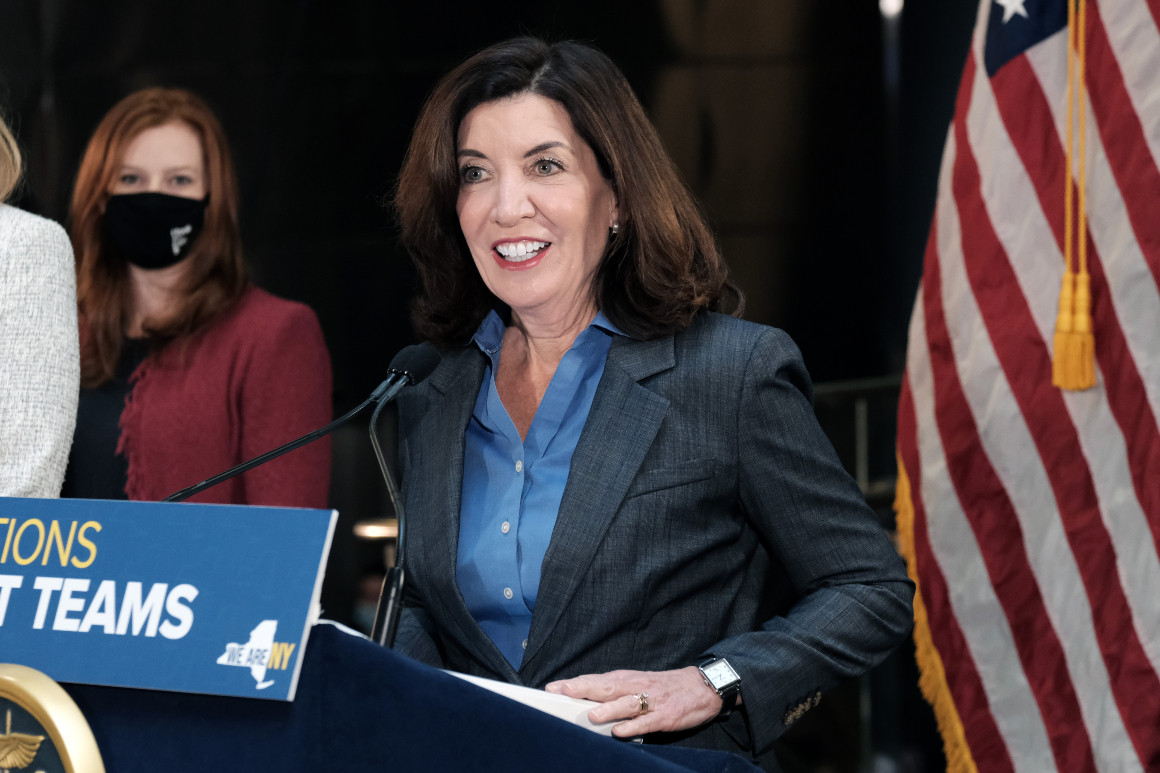 Hochul’s rise in New York, a hotbed of progressivism, offers a new test of the idea that moderates are the future of the Democratic Party — not the left.

ALBANY, N.Y. — New York Gov. Kathy Hochul, with less than six months on the job, turned Tuesday into a tour de force of her political and government prowess.

In one day, the moderate Democrat reported shattering campaign fundraising records, saw one of her biggest potential primary opponents bow out and released a state budget packed with goodies for residents and special interest groups.

And a statewide poll shows her crushing her foes.

All of it comes just months after she succeeded Andrew Cuomo, who resigned amid a sexual harassment scandal after nearly three terms in office, and suggests Hochul is quickly replacing the former governor as the most powerful person in New York politics.

If she wins, Hochul would be the first woman elected governor in New York history.

“She’s a tough chick from Buffalo,” said state Sen. Diane Savino (D-Staten Island), who endorsed her last year. “I always said — from day one, when people assumed she would just be there temporarily and as a placeholder for [Attorney General] Tish James or someone else — I said, ‘don’t underestimate her.‘”

Hochul’s rise in New York, a hotbed of progressivism, offers a new test of the idea that moderates are the future of the Democratic Party — not the left.

Hochul’s early victories come as she’s running as a middle-of-the-road Democrat from upstate New York, which hasn’t had an elected governor from the region since the 1920s, and after the pro-business former cop Eric Adams ran and won the mayorship as a moderate in heavily blue New York City last year.

Hochul, who took conservative positions when she was a local official and a congresswoman, now appears poised to follow Adams to securing a full term.

“She’s got a big lead and then she’s winning the money race, and she’s certainly winning the exposure raise,” said Douglas Muzzio, a political science professor at Baruch College in Manhattan. “She starting to look like a juggernaut.”

Hochul had already scared off her biggest political threat ahead of the June gubernatorial primary: James, a star Democrat who had declared her candidacy in October, only to drop out less than two months later. James had been garnering support on the left.

Then, on Tuesday, a Siena College poll showed Hochul with a 34 percentage-point lead over former New York City Mayor Bill de Blasio, who had been contemplating a run.

Just hours later, de Blasio said he would not enter the race as many expected he would do. De Blasio, a progressive who ended his second term as mayor in December, had already moved to create a new political committee and hired half a dozen nationally-known operatives to aide him in a potential bid.

“I am not going to be running for Governor of New York State, but I am going to devote every fiber of my being to fighting inequality in the state of New York,” de Blasio wrote on Twitter.

Then Hochul’s campaign said she had already raised a whopping $21.9 million to support her bid, shattering any previous record over a six-month period in New York.

By mid-morning, she had released a $216.3 billion state budget proposal that would leverage a massive revenue surplus to increase spending and provide record aid to schools and tax breaks to homeowners this fall, around the same time as the general election.

The state doesn’t expect an annual budget deficit until at least 2027, giving Hochul plenty of money to spread around.

“Kathy Hochul is doing a great job, and that’s reflected in great poll numbers and in her fundraising, as well as endorsements by labor unions and elected officials,” state Democratic Chair Jay Jacobs, who has endorsed her, said Tuesday. “People are coalescing around her, and that’s obvious today.”

Hochul’s path to a full four-year term is not without potential pitfalls. Another spike in Covid or an economic downturn could hurt her political fortunes.

She also has to win a June primary against two remaining Democratic foes: Long Island Rep. Tom Suozzi, a moderate who has more than $5 million in his campaign account, and progressive firebrand Jumaane Williams, the New York City public advocate. Williams was unsuccessful four years ago when he ran against Hochul for lieutenant governor.

Also, Hochul will look to win the election amid what is expected to be a strong year for Republicans nationwide. Her likely general election opponent is Rep. Lee Zeldin, a Long Island Republican who has knocked Hochul for her Covid response and not being tougher on crime.

He has also sought to tie Hochul to the Cuomo administration, where she was not particularly close to the governor or his top aides despite being his running mate.

Zeldin said in a statement on Jan. 4 that Hochul was in the Cuomo administration when thousands of seniors died in nursing homes, “the scores of women and others who suffered abuse during the Cuomo-Hochul Administration and the lives that were destroyed thanks to fear, intimidation and rampant corruption.”

But for now, Hochul has hold of governor’s office and much of the Democratic apparatus in New York, and she vowed to use the next six months of the legislative session to help New Yorkers out of the pandemic, starting with her budget due April 1.

“This is a moment of great possibility, a once in a generation chance to reconsider what is possible for our state,” Hochul said in her budget address.

“And this really is the beginning of New York’s next great comeback.”