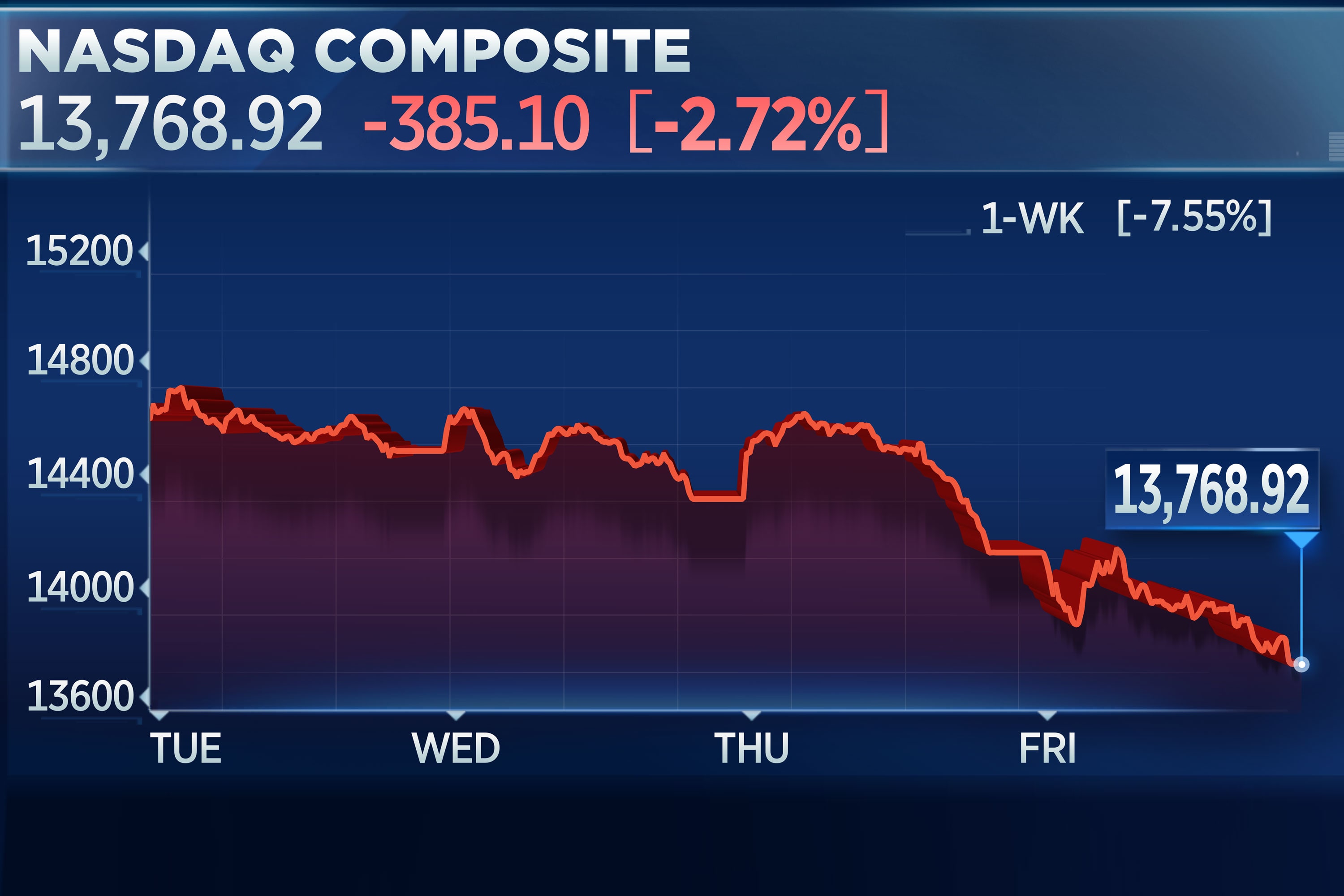 U.S. stocks tumbled on Friday, closing out a losing week and continuing a rough start to 2022. The Nasdaq Composite was hit the hardest with Friday’s selling sending the tech-heavy index to its worst week since 2020.

The Nasdaq posted a 7.6% loss for the week, its worst since October 2020, and now sits more than 14% below its November record close. Both the Dow and S&P 500 closed out their third straight week of losses and their worst weeks since 2020. The S&P 500 is off more than 8% from its record close.

Netflix‘s disappointing quarterly report is the latest setback for technology investors. Shares of the streaming giant tumbled 21.8% on Friday after the company’s fourth-quarter earnings report showed a slowdown in subscriber growth. Its competitors’ shares also declined, with Dow component Disney, which operates the Disney+ streaming service, off 6.9%.

Netflix is the first major tech stock to report earnings this season, with Apple and Tesla slated to post earnings next week. Tesla lost 5.3% on Friday. Other tech names like Amazon and Meta Platforms fell 6% and 4.2%, respectively.

The Nasdaq is off to its worst start to a year, through the first 14 trading days, since 2008.

“Given the emotional decline in the stock market of the last few days, fundamentals have been suspended as market action is entirely tied to technical support levels,” said Jim Paulsen, chief investment strategist at Leuthold Group.

“Until a level is reached in this collapse… fundamentals like bond yields, economic reports and even earnings releases will not likely have much impact. Fear now must be extinguished by some stock market stability before traders and investors again start to consider fundamental drivers,” added Paulsen.

The Nasdaq Composite’s struggle is largely due to a surge in government bond rates this week. The U.S. 10-year Treasury hit as high as 1.9% on Wednesday as investors focused on the Federal Reserve’s timeline for raising interest rates and broadly tightening monetary policy. However, bond yields retreated on Friday.

Investors will now be turning their attention to the Federal Reserve’s January two-day policy meeting, set to start on Tuesday.

“While a handful of rate hikes over the next year or two would represent a shift in Fed policy, we wouldn’t consider policy restrictive and we don’t expect the initial rate increase to derail the economic recovery,” said Scott Wren, senior global market strategist at Wells Fargo Investment Institute. However, he added that rate hikes will inject volatility into the market.

Friday’s selling intensified into the close, continuing a troubling pattern to start the year. The S&P 500, on average, has fallen 0.16 percentage points in the final hour of trading in January, according to Bespoke Investment Group analysis through Wednesday. That average last-hour performance places January in the bottom 1% of all months and third-worst since 2000, Bespoke found.

Small caps have also been hit hard this week. The Russell 2000 secured its worst week since June 2020. The index fell 1.8% on Friday.

Bitcoin was also hit hard on Friday as investors brace for the Fed and dump riskier assets with higher rates ahead. The digital asset fell more than 10% to around $38,233 on Friday.