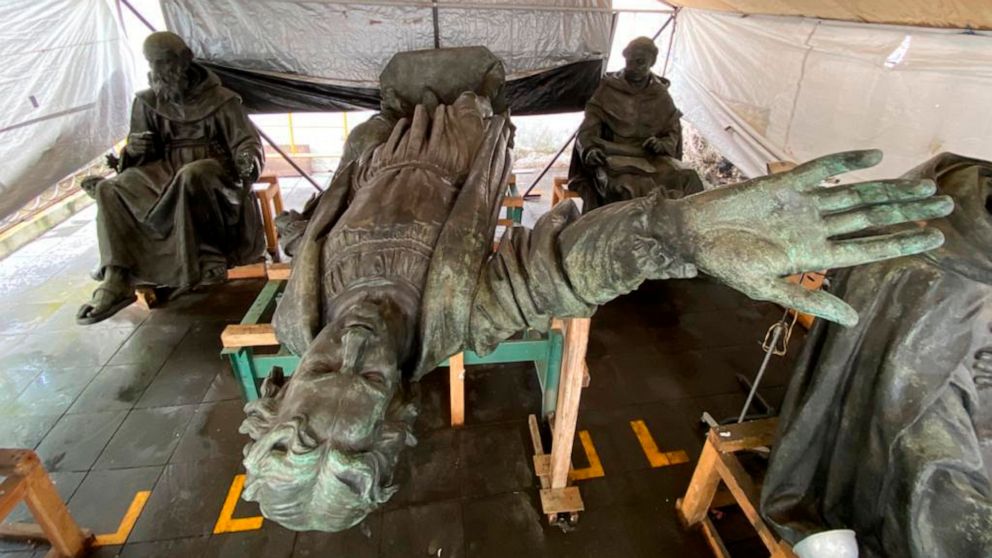 MEXICO CITY — A statue of Christopher Columbus that was taken down from Mexico City’s central boulevard won’t be going back up for months.

Restorers say that years of protest graffiti and weather have taken their toll on the 1877 statuary and it will not be ready for reinstallation until the first half of 2022, and when it does go back up it will be at a less prominent and sensitive location.

It was removed last year supposedly for restoration, shortly before Oct. 12, which Americans know as Columbus Day but Mexicans call “Dia de la Raza,” or “Day of the Race” — the anniversary of Columbus’ arrival in the Americas in 1492. Protesters frequently targeted the Columbus statue for graffiti.

City authorities announced this week that Columbus and the four missionaries who surround him will be reinstalled in a park in an upscale Mexico City neighborhood. The prime site on the city’s iconic Reforma boulevard will be given to a statue representing an Indigenous woman, but a replacement hasn’t been picked yet.

The decision to replace him has raised hackles in Mexico City, just as the presence of the Italian explorer had angered supporters of Indigenous rights. They say Columbus didn’t “discover” the Americas — Indigenous people had long lived here — and that he only ushered in a colonial era of theft, displacement and death.

Diego Jáuregui is the restorer heading up a team from the National Institute of Anthropology and History that has been given the task of restoring the standing figure of Columbus, and the seated figure of the monks around him.

Jáuregui tries not to get into the politics of it all.

“The only thing I can say is that we do not have any control over what meaning people ascribe to the historical monuments or cultural patrimony,” said Jáuregui.

“Culture and society are changing and we cannot avoid things happening,” he said, in a apparent reference to red paint that demonstrators doused Columbus with, to protest the treatment of Indigenous people.

“What we can do, however, is to fulfill our duty to protect, safeguard and transmit to future (generations) these historical monuments, beyond whatever meanings or controversies,” he said.

Mexico City Mayor Claudia Sheinbaum said the spot on a traffic circle on Reforma boulevard should be given to an Indigenous woman because “to them we owe … the history of our country, of our fatherland.”

Sheinbaum said the function of statues is to communicate history, and the fact that Columbus appeared in a heroic pose in such a prominent spot had the effect of silencing the other part of the story. Replacing him at the spot “is an act against historical silence,” she said.

Sheinbaum appeared happy with a decision by a city committee to put the explorer in a quiet park in the ritzy Polanco neighborhood, where protests seldom occur. She has called him “a great international personage.”

But opposition to what critics call ‘erasing history’ has also sprung up. A petition posted on the Change.org site calling for Columbus to be returned to his original spot has garnered over 31,000 signatures.

“We Mexicans, and particularly residents of the capital feel indignant and offended by the removal of our historical patrimony,” the petition states.

“We think this is a populist decision by the mayor that represents only a minority of the population who agrees with her revisionist version of history, without taking into account that the statue has nothing to do with ideology,” it reads.

Most Mexicans have some Indigenous ancestry and are well aware that millions of Indigenous people died from violence and disease during and after the conquest.

City authorities had originally proposed that a modernist head of an Indigenous woman, a sculpture known as “Tlali,” would go on the spot. But now they say a decision has yet to be made.

Mexico City is not the only metropolis that has had problems. Columbus statues have been attacked and even toppled in Chile, Colombia and the United States. In 2013, the city government of Buenos Aires, Argentina decided to replace a Columbus statue near government headquarters with one of Independence hero and part-Indigenous Juana Azurduy.

Jáuregui works on restoring the bronze Columbus statue in a protected, tent-covered area. The layers of paint and graffiti reflect all the Oct. 12s it has lived through.

“As it became a recurrent phenomenon, you just see it as part of your work, as something inevitable that happens,” he says of the damage.