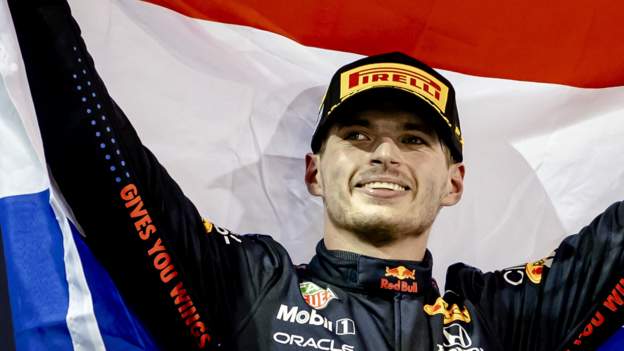 Red Bull’s Max Verstappen snatched his first Formula 1 world title by beating Lewis Hamilton in a thrilling finale to the season in Abu Dhabi – but only after the Briton’s Mercedes team had two protests against the result rejected by stewards.

Hamilton had appeared in control of the race and on course for the title himself, despite controversy on the first lap, until a late safety car.

The race was restarted with one lap to go with Verstappen on fresh tyres and Hamilton on old ones and the Dutchman swept by to win the race.

It was in many ways a fitting end to one of the greatest and most contentious seasons in Formula 1 history – and the arguments over right and wrong will rage for some time to come.

At the end of the race, while Verstappen screamed with delight and Red Bull celebrated, Briton Hamilton sat in his Mercedes for several minutes, disbelieving at the way events had turned against him in the final minutes.

However, Mercedes launched two protests – one for Verstappen overtaking Hamilton under safety car conditions just before the restart, and one over what they believe was officials not correctly following the rules on safety car procedures – both of which were rejected after several hours and meetings between the two teams.

How a historic title decider unfolded

The race had appeared to surrender to Hamilton after he was controversially allowed to keep the lead he had earned with a better start than Verstappen, despite going off track to retain his position when the Dutchman tried to pass him at the end of the first back straight.

Red Bull and Verstappen were exasperated and disbelieving about it, but Hamilton was imperious from then on, through a pit stop and a virtual safety car, until Nicholas Latifi crashed his Williams with five laps to go.

Mercedes felt they could not afford to pit Hamilton because to do so would have been surrendering the lead if Verstappen did not do the same – and he may well not have done because his tyres were relatively fresh after a second stop.

But when Hamilton did not stop for fresh tyres, Verstappen did and that was the decisive call.

There was more controversy as race director Michael Masi initially said lapped cars between Hamilton and Verstappen would not be allowed to un-lap themselves, as is normal practice.

Red Bull complained and Masi changed his mind, allowing the lapped cars between the title contenders past Hamilton, which put Verstappen right behind Hamilton for the one remaining lap of racing.

Verstappen passed Hamilton into Turn Five and held off his attempts to re-pass down the two straights that followed and completed the lap before erupting with joy.

Yet whatever anyone’s view of the various incidents in the race, few would begrudge Verstappen the title after a season in which he and Hamilton have gone toe-to-toe throughout in one of the most remarkable F1 seasons there has ever been.

Hamilton, meanwhile, will have to console himself with Mercedes’ victory in the constructors’ championship – for an unprecedented eighth consecutive year.

At the same time, it was a fitting way to end a season that has been characterised by on-track clashes and off-track arguments between Hamilton, Verstappen and their teams.

The race unfolded as the season has, with Hamilton and Verstappen in a race and league of their own, and for a long time the year’s destiny appeared to be heading towards Hamilton.

There was drama from the opening lap, after Verstappen made a poor start from pole position, Hamilton an electric one from second on the grid, and the Mercedes was ahead before the first corner.

Verstappen tracked him through the first few corners, slipstreamed him down the long, first back straight and dived for the inside into the chicane at Turns Six and Seven.

Verstappen got down the inside of Hamilton but went in deep to the corner, his speed carrying him to the outside kerb long before the second right-handed part of the corner.

Hamilton avoided him, as he has so many times this season, and cut across the chicane, retaining the lead.

He slowed a little over the rest of the lap to give back the advantage he considered himself to have gained, and the arguments started on the pit wall.

Verstappen said over the radio: “He has to give it back.”

Red Bull radioed race director Michael Masi to insist that Verstappen was “ahead and stays on track”.

Masi replied: “He has forced him off. All the advantage was given back before the end of the first lap.”

The officials decided that no investigation was necessary and when Verstappen was told of the decision he said: “That is incredible. What are they doing there?”

The recriminations will doubtless continue for some time, especially as Verstappen came into the weekend complaining that he was being treated differently than other drivers by the stewards after the controversial Saudi Arabian Grand Prix last weekend, and Red Bull have been ratcheting the tension between the teams with a series of controversial claims in the media.

Hamilton had the race – until luck intervened

On track, though, the fundamental truth for much of the race was that once Hamilton had got by, he and Mercedes simply had too much pace for Red Bull and Verstappen, as they have for the past four races.

Red Bull threw everything they could at Hamilton.

After Hamilton and Verstappen pitted for fresh tyres, they left Perez out and ordered him to hold Hamilton back.

Hamilton passed Perez down to Turn Six on lap 20, but was then repassed down the next straight.

Perez was then ordered to “back him up” through the marina section of the track, and Verstappen closed what had been an 8.7-second deficit to 1.7 by the time Hamilton finally passed Perez a lap later.

But Hamilton eased away again, until a virtual safety car deployed to clear the stranded Alfa Romeo of Antonio Giovinazzi gave Red Bull an opportunity.

They pitted Verstappen for fresh tyres, hoping to come back at Hamilton over the final 20 laps.

But so strong was Hamilton that Verstappen was able to make only minimal inroads into his lead, and the race appeared to be over until the late drama snatched it – and what would have been his eighth world title – from Hamilton’s grasp.

If you are viewing this page on the BBC News app please click here to vote.

2021-12-12
Previous Post: Crypto exchanges and software keep getting hacked. Here’s what you should know
Next Post: More than 80 killed in Kentucky after deadly tornadoes rip across several states