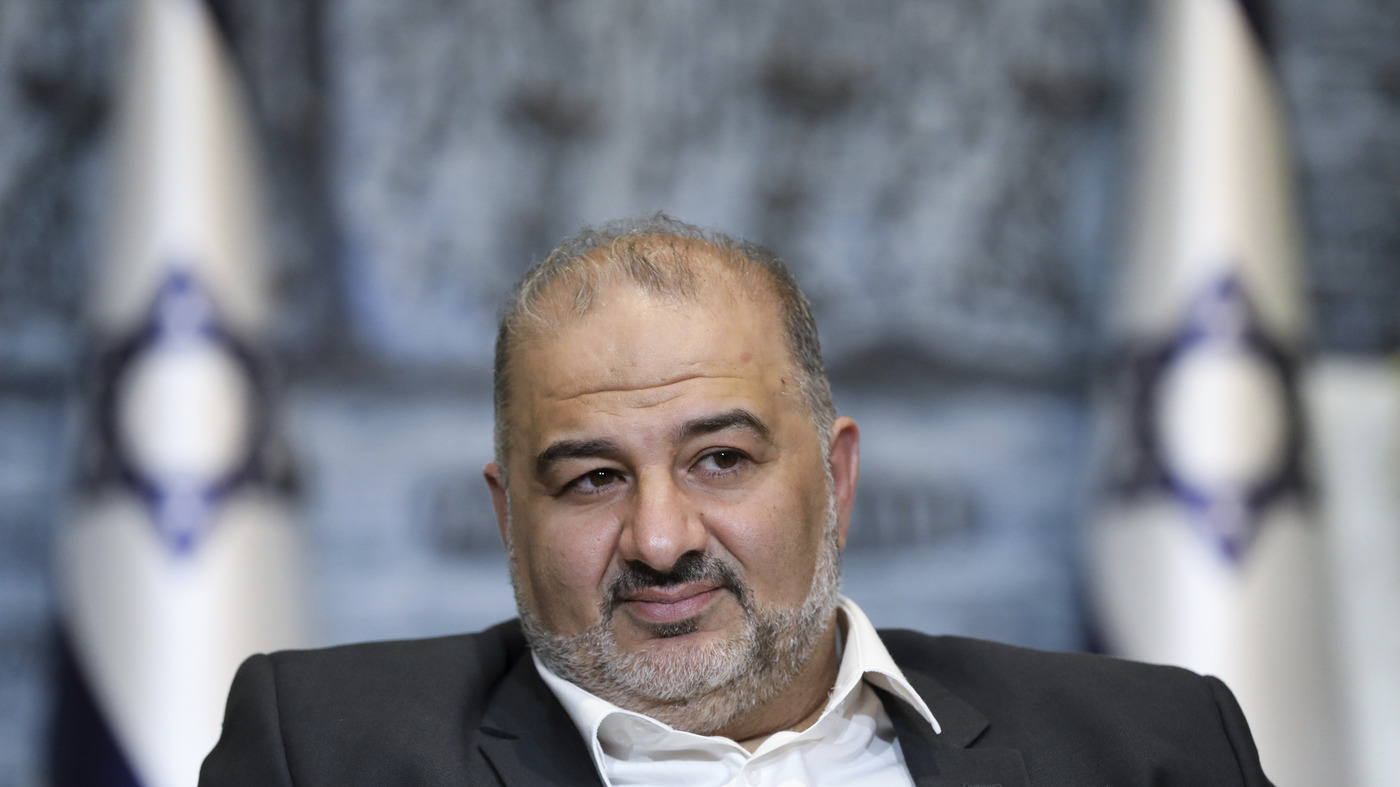 Israeli Arab politician, leader of the United Arab list, Mansour Abbas, discusses with President Reuven Rivlin on who might form the next coalition government, at the president’s residence in Jerusalem, April 5, 2021.

Israeli Arab politician, leader of the United Arab list, Mansour Abbas, discusses with President Reuven Rivlin on who might form the next coalition government, at the president’s residence in Jerusalem, April 5, 2021.

Abbas, a once obscure politician, is the linchpin of the shaky union, securing hefty budgets and favorable policies for his constituents and even winning an audience with the king of Jordan.

“We are equal partners the whole way, part of the coalition, for the first time in the state of Israel,” Abbas recently told the Israeli news site Ynet. “We are compromising to solve the Arab society’s problems.”

Abbas’ pragmatic approach has secured funding for housing, electricity and crime-fighting in Israel’s traditionally neglected Arab sector. He also has not been afraid to confront his partners to get what he needs.

But he also is being forced to perform a delicate balancing act between the desires of his Arab voters and his Jewish coalition partners. His every move is being watched by his constituents, whose stake in the country’s democracy could falter if he fails to bring long-term changes.

“The fact that Arabs are sitting around the table in government is no small matter,” said Nasreen Haddad Haj-Yahya, director of the Arab Society in Israel program at the Israel Democracy Institute, a Jerusalem think tank. “The question is will this political power translate to actions that citizens feel in their day-to-day lives?”

Abbas made history last June when his small Islamist party became the first Arab faction to join an Israeli coalition. Through Israel’s 73-year history, Arab parties have remained in the opposition, slamming the government and wanting no part in policies against their Palestinian brethren in the West Bank and Gaza Strip. Their Jewish counterparts have often viewed them as potential security threats and enemies from within.

Palestinian citizens of Israel make up a fifth of Israel’s 9.4 million people. While many are integrated into Israeli society, the community is generally poorer and less educated than Jews and has long faced discrimination and questions about its loyalty. Arab voter turnout has typically been lower than Jews and reached a nadir in elections last year.

The coalition, made up of 61 lawmakers out of Israel’s 120-seat Knesset, now relies on Abbas’ four party members to pass legislation, approve a budget and keep the government afloat.

Abbas, 47, heads the Ra’am party, a moderate conservative Islamist party with ties to the Muslim Brotherhood. Ra’am’s constituents are predominantly Bedouin Arabs, who are among the country’s poorest citizens.

A dentist by education, Abbas has led Ra’am in the Knesset since 2019, taking on membership in various parliamentary committees but hardly registering in mainstream Israeli politics.

As Israel descended into a protracted political logjam, with four elections in the span of two years, Abbas emerged as the antidote to the chaos.

Ahead of elections in March 2021, Abbas broke Ra’am off from a union of Arab parties and hinted the faction would sit in a coalition under the right terms, no matter who was leading it.

Former Prime Minister Benjamin Netanyahu held unprecedented talks with Abbas on joining forces, reportedly promising him a list of policies that would deal with rampant crime and housing issues in the Arab community. But Netanyahu’s ultra-nationalist allies opposed cooperation with Abbas and the talks collapsed.

When legislator Yair Lapid was then asked to form a government, he picked up where Netanyahu left off and Ra’am became a key member of the current coalition.

Made up of eight parties that run the gamut from nationalist factions to dovish parties that support Palestinian statehood, the unwieldy coalition headed by former West Bank settler leader Naftali Bennett promised to put divisive issues aside. It has focused instead on subjects that wouldn’t rattle the coalition’s stability, including the pandemic and the economy.

The Palestinian issue, traditionally of central importance to Arab parties, has been largely ignored.

Abbas has insisted he is not ignoring long-standing Palestinian aspirations for statehood in the West Bank, Gaza and east Jerusalem, territories Israel captured in the 1967 Mideast war. Family ties bind the Palestinian citizens of Israel and those living in the occupied lands.

Abbas told a podcast after the coalition was formed, “Ra’am wants to focus on the pressing issues in Arab society.” His office declined interview requests.

Ra’am has pushed ahead with its priorities from inside the coalition. It secured an unprecedented multibillion-dollar budget for the Arab community, aiming to improve living conditions and minimize record-breaking crime rates. At Ra’am’s behest, the government has moved to authorize some unrecognized Bedouin villages in the southern Negev desert and connect thousands of illegally built homes to electricity.

“Governments of Israel over time neglected the Negev and didn’t deal with the root problems,” said Faiz Abu Sahiban, the mayor of the Bedouin city of Rahat and an Abbas supporter. “It’s the first time the state of Israel is hearing from the Bedouin.”

The diverse opinions have inevitably clashed. Last week, Abbas threatened to withhold his party’s votes in the parliament in protest against tree planting on land claimed by Bedouin in the Negev, a crisis that led to the forestry project being suspended. Ra’am has also pushed back on efforts by nationalist coalition elements to extend a law that prevents Palestinians who marry Israeli citizens from obtaining residency rights.

Abbas is repeatedly labeled a terrorist sympathizer by opposition ultra-nationalist lawmakers. A social conservative, he also opposes pro-LGBT legislation in a coalition with an openly gay minister.

He has also faced criticism from Palestinian citizens of Israel. Recently, he caused an uproar in the Arab public when he recognized Israel as a Jewish state at a business conference.

Right-wing Israeli leaders have repeatedly called on Palestinians to recognize Israel’s Jewish character, and the predominantly Jewish audience erupted in applause to the remarks.

“If the Arab public sees that what Mansour Abbas did is effective and brought a change, I have no doubt that voter turnout will increase dramatically,” said Mohammad Magadli, a political analyst with the Arabic language Nas Radio and Israeli Channel 12 TV.

“It would mean that Israel would become a real democracy.”