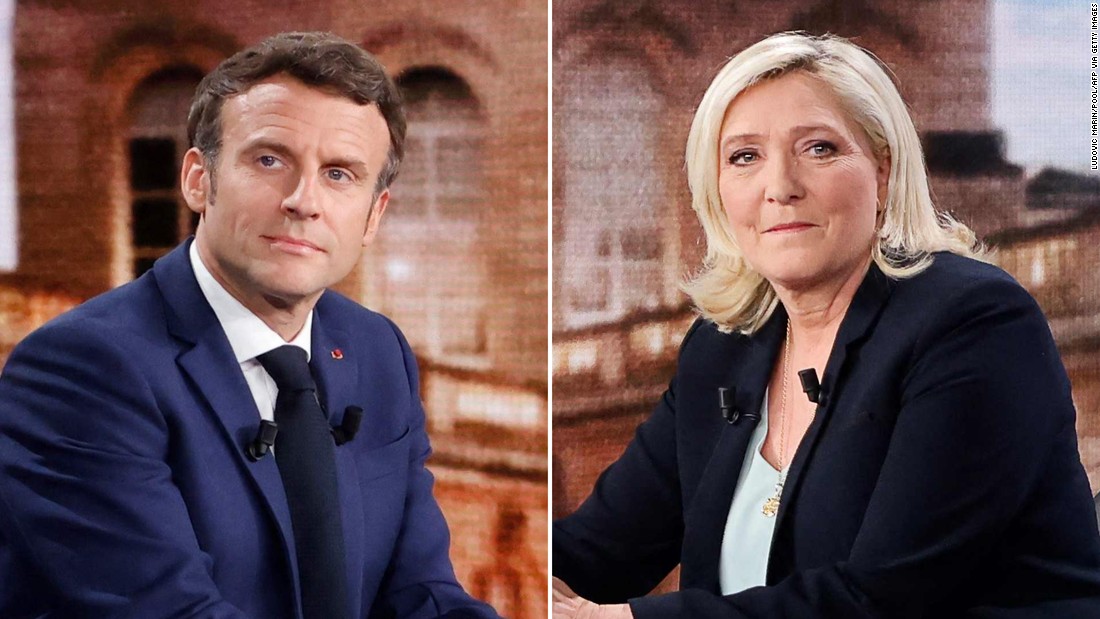 The centrist incumbent beat a familiar tune of heavy investment in French industry and an uncompromising commitment to the European Union. Le Pen, the leader of the far-right National Rally party, cast herself as the voice of a public struggling with a cost-of-living crisis.

Le Pen, who lost to Macron in the 2017 runoff, said she was “obliged to be the spokesperson of the people” and promised to be “the president of sovereignty.”

“My absolute priority of the next five years is to give French people back their money,” she said, repeating her campaign pledge to lower the VAT (value-added tax) on energy and fuel.

The candidates’ relations with Russia sparked a fiery exchange during the almost three-hour debate broadcast on TF1 and France 2, with Macron highlighting a loan to a Russian bank that Le Pen’s party is still repaying.

“You’re not speaking to other leaders, you’re speaking to your banker when you’re talking to Russia. That’s the problem Mrs. Le Pen,” he said.

Le Pen has long been a vocal admirer of Russian President Vladimir Putin, now considered a pariah in the West due to his unprovoked assault on Ukraine. Le Pen visited the Russian strongman during her 2017 presidential campaign, but this time around, she was forced to scrap a promotional leaflet with a photo of her and Putin taken during that trip.

Le Pen’s previous aversion to NATO — she once vowed to pull France from the alliance — could also be a liability as recent polls show most people surveyed support France’s involvement.

On Ukraine, Le Pen roundly supported her opponent’s material support for the country as well as sanctions against Russia — except for a ban on Russian oil and gas imports.

“I don’t think it’s the right method, that’s not what in reality will hurt Russia. And above all that will do enormous hurt to the French people,” she said.

Macron added that Russia was pursuing a “suicidal” course of action in Ukraine, though he has declined to label Moscow’s actions in the country as “genocide,” prompting an invitation from Ukrainian President Volodymyr Zelensky to come and see the evidence for himself.

Throughout the debate, Le Pen portrayed Macron as a leader out of touch with voters, claiming he was ignorant of the suffering of health care workers before Covid-19, as he promised more investment in health care.

Elsewhere, Le Pen labeled Macron a “climate hypocrite” for following climate policies, such as encouraging consumers to buy electric cars, that she said were financially out of reach for many French people.

“We must have an (energy) transition but that must be, with time, much slower than what we are imposing on French people to allow them to deal with it,” Le Pen said.

Macron’s stubborn defense of France’s commitment to the European Union was also a hot topic in the debate.

The President argued that the European Union works in France’s favor, particularly when faced with markets like those of the US and China, whose populations far outstrip its own.

“It’s there that Europe is useful for us. When Google comes and attacks us in our market, who comes and helps us? Europe. And when these big groups don’t pay their taxes in our countries, what allows us to fight back? Europe.”

Le Pen, who in the 2017 election called for a French exit from the EU, has softened her stance, promising reform of the bloc and an “alliance of nations.”

Le Pen also returned to one of her centerpiece policies: banning the wearing of hijabs in public.

“I think that the headscarf is a uniform imposed by the Islamists,” she said. “I think that the great majority of the women who wear one can’t do otherwise in reality, even if they don’t dare say so.”

Macron accused her of creating a “system of equivalence” among Islamism, terrorism and foreigners that would “create civil war.”

The contest between Macron and Le Pen is expected to be a close one.