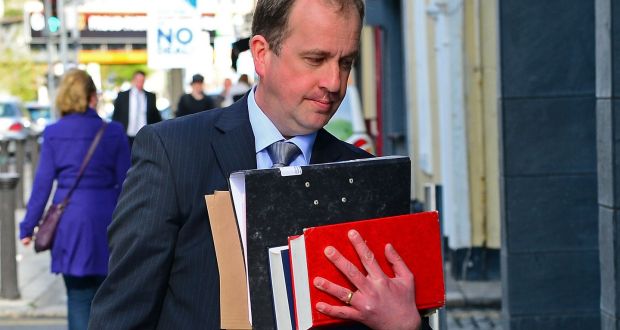 A liquidator wants businessman Alan Hynes to be personally liable for €4.8 million over his involvement in alleged reckless and fraudulent trading in three companies connected to the Tuskar group, the High Court heard.

Liquidator Myles Kirby is also seeking that his cousin, Frank Hynes, a director of one of the companies and the manager of another, be made liable for some €1.5 million. Alan Hynes’s brother-in-law, UK-based Dr Adrian O’Reilly, should be made personally liable for just over €1 million in relation to one of the companies, he says.

The three companies are Hynes Jewellers Wexford Ltd, JW Fashions Ltd and Tuskar Property Holdings Ltd, which were wound up by Mr Kirby in early 2020. Mr Kirby says he found multiple frauds and misappropriation, reckless and fraudulent trading and failure to keep books and records, among other things.

Control
David Whelan, for Mr Kirby, said Alan Hynes was the “guiding intelligence” behind all three with Frank Hynes playing a lesser role and Dr O’Reilly completely failing in his duty as the eventual owner of Tuskar Property to exercise any control or supervision.

He was seeking the maximum disqualification from directorships for Alan Hynes and lesser disqualifications for the other two. The case is also against Frank Hynes’s wife, Martina Hynes, over the alleged misappropriation of Hynes Jewellers funds to the couple’s joint accounts.

A fifth respondent is a company called Tuskar Investment Group, which is owned by Dr O’Reilly.

On Friday, the case was due to conclude following legal submission by Mr Whelan and following occasional participation by Alan Hynes, Frank Hynes and Martina Hynes via remote link over the previous three days. Dr O’Reilly, who denied wrongdoing in written defence, did not participate at all. All four have previously denied wrongdoing in written defences.

At midday on Friday, Frank Hynes, who earlier in the week told the judge he was seriously ill and unable to continue, joined by video link and was allowed to give evidence although Mr Justice Michael Quinn said this was highly unusual given the liquidator’s case had ended and there had been no effective participation with the previous evidence.

Frank Hynes told the court he had 33 pages of bank statements to show any monies taken from Hynes Jewellers and put into his joint account had been returned to the company.

He had thought this information had been already supplied to the liquidator by Alan Hynes in a spreadsheet.

“The monies were paid back and no money is owed by me or my wife to that company, none whatsoever,” he said.

He claimed some of what had been said in the case so far was “a total fabrication”.

Under cross-examination by Mr Whelan, who had objected to his attempt to introduce evidence that had never been put to other witnesses, Frank Hynes accepted the bank statements he was now relying on were never provided to the liquidator.

Mr Hynes said everything had been recorded but that books and records had been taken (as part of the liquidation) and not returned to him or Alan Hynes.

When counsel said some €354,000 paid into the couple’s joint account was unaccounted for and had been dissipated, he replied: “No you are quite wrong.”

Claim
He replied: “And I put it to you she is obviously mixed up or not telling the truth.” He said he had a number of conversations with her about this and she was “quite willing to do that”.

He said he “totally refuted” the liquidator’s claim he was part of a fraud with intent to defraud creditors.

Counsel said he was party to reckless trading. “I think I was reckless looking back,” he said. He refuted the suggestion that he retained monies that should be repaid. He “totally agreed” he was a person unfit to be a director.

The judge said while normally he would be reserving judgment at this stage on the case, he was adjourning the matter until Tuesday when he would allow any of the other personal respondents to give evidence.

He stressed they should either be present in court on video link by the time the case is due to start and not at some later time in the day as had happened a number of times already.